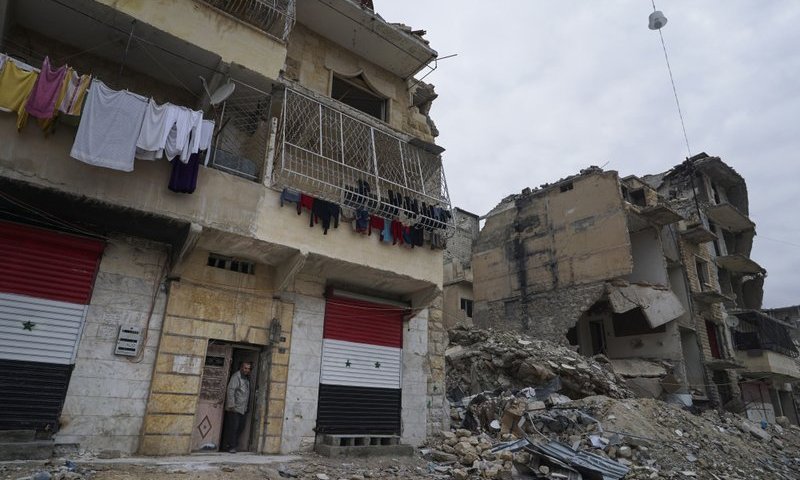 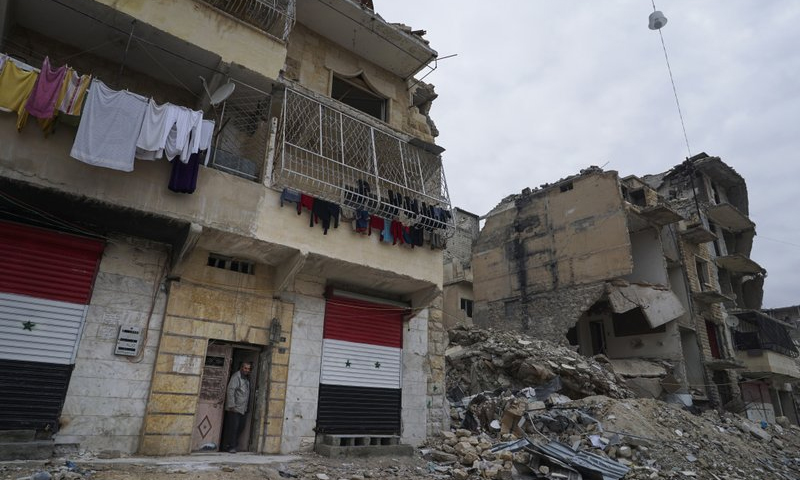 Syria’s People’s Council member and businessman Hussam Qaterji has seized tens of houses in the neighborhoods of Jabal Badro, Ard al-Hamra, al-Ahmadiyah, and Masaken Hanano, after offering less than half of their values to their owners. Qaterji appropriated the houses on the pretext that some of these neighborhoods are classified as “slum areas” with no officially registered real estate records or on the grounds that the owners of the houses are wanted by the Syrian regime.

Enab Baladi monitored the selling of 23 houses in the Jabal Badro area near Aleppo International Airport in just two days, according to a broker informed of the selling operations. The broker, who refused to be named for security concerns, told Enab Baladi that some of the houses were under seizure because their owners joined the ranks of the armed opposition. The other part of these houses was destroyed, and their owners could not afford to restore them.

The residents of some of the destroyed houses in neighborhoods of only one or two intact houses agreed to sell their properties because the entire street was subject to demolition, the real estate broker said.

Residents of informal houses in the Masaken Hanano neighborhood were presented with selling offers with a one-week deadline to accept; otherwise, their places would be demolished for being illegally built. According to the broker, the offered price is acceptable to some,” and some people sell their houses because they own other dwelling places. Other people endeavor to leave Syria once they receive the money.

Aleppo governorate has witnessed the highest levels of destruction in Syria, according to the Reach Initiative in 2019. The eastern part of Aleppo bore the effects of the military campaign that ended in the Syrian regime and Russia’s control of the city in 2016, after displacing the residents to the northern countryside, which is still under the control of opposition factions.

According to a source from the military formations of Qaterji, the businessman’s elements threatened homeowners who refused to sell with arrest. They intimidated them for either having relatives in the opposition-held areas or dealing with opposition factions when they controlled the city’s eastern neighborhoods.

The source pointed out that the houses purchased by Qaterji in the Jabal Badro and al-Ahmadiyah areas were about 60 houses, some of which are destroyed, and others are at risk of collapsing. Qaterji’s elements reached out to the families displaced from Aleppo to buy their properties, as the purchasing operations were made through legal agents for families living in other governorates like Damascus or Tartus.

A property owner in the Masaken Hanano neighborhood, who asked not to be named for security concerns, told Enab Baladi that Qaterji’s elements visited him almost daily to pressure him to sell his house, and their harassment increased day after day.

The owner forcibly accepted the elements’ offer and sold his house for 15 million Syrian pounds (SYP = 5,000 USD). This price is little compared to the property’s value, but the elements’ argument of demolishing his property for being informal without compensation left no room for refusal on his part. The owner could not afford to buy an alternative house, especially with the little money he received and the area’s high property prices; therefore, he was forced to live with his brother in the Qadi Askar neighborhood.

Another young man, who asked to remain anonymous for security reasons, told Enab Baladi that when he refused to sell his family’s home in the al-Ahmadiyah neighborhood, he was directly threatened with arrest for “damaging the prestige of the state.” He said, “one of Qaterji’s members came to my house and asked me if it was for sale, but I refused his offer. Several days later, I received an anonymous call threatening me with arrest.”

The young man signed the property sale contract in fear of threats and after witnessing the demolition of 16 neighborhood houses with bulldozers. The seized houses belonged to people accused of having connections with the opposition.

With a loss of more than half of the value of his house, another owner in the Masaken Hanano neighborhood sold his property after being threatened with his son’s kidnapping by Qaterji’s elements, he told Enab Baladi, asking not to be named.

In the Jabal Badro area, a man sold his house after being detained for two weeks by Qaterji’s elements. He was offered 15 million (SYP = 5,136 USD) for his 40 million (SYP = 13,698 USD) property. He said, “I was arrested by elements who were driving an unidentified vehicle, and during my stay in prison, I was not investigated or beaten, but I was told to comply with the chief’s orders,” in reference to Hussam Qaterji.

After being released from prison, the man looked for an alternative house to which he moved his belongings, and authorized another person to complete the sale contract and follow-up on the property sell and delivery procedures.”

According to the city’s residents, the fate of the sold houses is not limited to demolition, as Qaterji hands over some of the appropriated properties to members of the General Intelligence’s divisions, who are affiliated to him. These elements are deployed in the Bustan al-Qasr, al-Kalasah, al-Sukari, and al-Fardous neighborhoods. Qaterji also settled some people’s situations on condition that a member of their family would join his military groups, including around 4,500 fighters, according to one of the elements.

Qaterji is one of the most prominent businessmen who emerged on the scene during the Syrian war years. Qaterji was born in al-Raqqa province and is 39 years old. His name was linked to commercial activities with eastern Syrian regions when they were under the control of the Islamic State (IS) organization and then the Syrian Democratic Forces (SDF). Qaterji supervised oil and wheat deals for the benefit of the Syrian regime.

The businessman chaired the International Qaterji Group and contributed to the establishment of six companies and had shares in them, according to the al-Iqtisadi website. Qaterji has also represented Aleppo Province in Syria’s People’s Council since 2016. In 2019, the businessman apologized to the Council for a video recording showing fighters giving him a military salute in al-Raqqa countryside. He said that the video aimed at discrediting him, as he is not a military figure in the first place.

Last November, the US Treasury listed Qaterji on the list of businesspeople subject to economic sanctions, as part of the Caesar Act sanctions, for business deals he made on behalf of the Syrian regime.

In 2019, the Qaterji family established the Steel for Metal Industries in Aleppo with a capital of 100 million (SYP = 34,246 USD). They founded a factory to make and cast metal, remove iron wires, and metal fusion and molding. The company trades and imports machinery, engines, and building materials and undertakes contracting works.