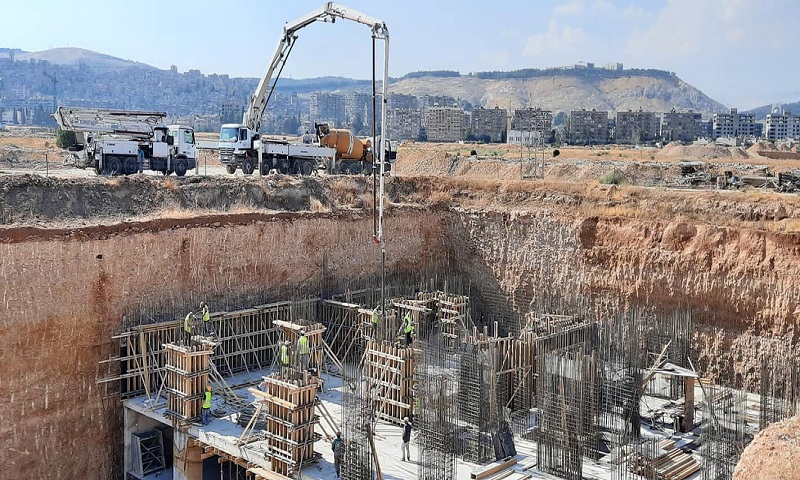 The Syrian General Establishment of Housing has estimated that the two alternative housing projects “Bb 127 and Bb 64”  for Marota City former residents would be completed in three years.

On 8 December, the government newspaper al-Baath cited the Director-General of the General Establishment of Housing, Ayman Mutlaq, saying that the project cost would be about 25 billion Syrian pounds (SYP =  8,474,576 USD), including the supervision contract. Mutlaq also denied any current obstruction of the project.

Mutlaq promised that the housing units would be delivered to the citizens  eligible for alternative accommodation within three years, under Legislative Decree No. 66. According to the decree, the project implementation contract should include a three years period agreed upon by the General Establishment of Housing and the project implementing party to finish the project on time.

On 12 October, the Director of Social Housing at the Syrian General Establishment of Housing, Mawya Rangous, said in an interview with the local radio station Melody FM that “the implementation duration of each tower of the Marota City project will take between three to five years starting from the date of receiving the tower plot.”

Rangous added that in case of high construction costs, the monthly payments of alternative housing recipients might increase. She indicated that there would be monthly payments, most of which are upon allocating dwelling units and another payment on concluding the property delivery contract.

She also spoke of a deadline until 14 January 2021 for those who defaulted on the alternative housing’s first payment.

Rangous noted that the defaulted people would have their alternative housing subscriptions delayed, indicating that the priority is currently given to those who pay their installments on time.

On 28 September, the General Establishment of Housing opened registration for those entitled to alternative housing in the development zones of the Marota City and the Basilia City projects. The number of accommodation units reached 5,516.

The General Establishment published tables certified by Damascus governorate, listing the names of entitled persons, according to their specified dwelling category and space. It also announced that the application period to alternative housing would last between 18 December and 14 January 2021.

The tables included the entitled categories, allocated spaces, the initial cash payments to be paid and the date of payment, the monthly installments, and the specific branch of Syria’s Real Estate Bank for payment.

The Marota City project started in 2012, after the Syrian regime’s president, Bashar al-Assad, issued Legislative Decree No. 66, which provided for the establishment of a development zone in the Khalaf al-Razi area in Damascus.

At the end of last June, Syria’s Prime Minister, Hussein Arnous, asked the Ministry of Finance, Damascus governorate, and Damascus Cham Holding Company, which is owned by the governorate and responsible for implementing the project, for finding appropriate formulas in providing financing support and ensuring financial flows to start the alternative housing project.

The Syrian government agreed on establishing alternative housing in an area of no public works within the land stipulated in decree No. 66. It required alternative accommodation to be of adequate internal and external specifications and align with the project’s overall visual landscape.

In January 2019, the European Union (EU) imposed sanctions on 11 Syrian businessmen and five business entities, most of which connected with the Marota City project.