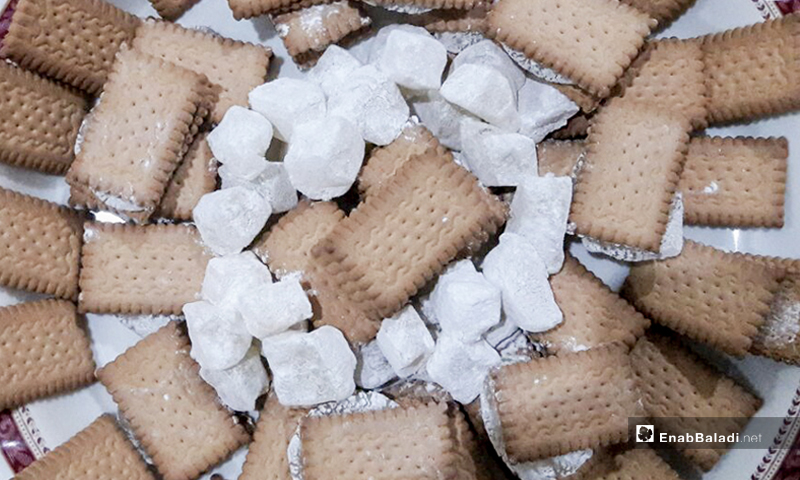 In a factory for Syrian delight “raha”, Younes, a young man from Daraa province, puts down small pieces of sweets covered in powdered sugar into square cardboard boxes, wearing his long white coat, facial mask, and gloves. The young man has been working in this profession since childhood in Syria’s southern province of Daraa, which is famous for making the traditional sweet and is linked to it. The Haurani raha is soft, sweet, and cheap, which made it a favorable choice for buyers.

In a large round bowel made of copper, Younes Abdul Karim pours sugar, water, starch, and citric acid. Then, he leaves the mixture on fire to boil and cook before adding mastic gum and rose water and starting the two-hour kneading phase. The raha mixture is poured into steel molds to cool down; later, it is spread out on tables, cut, and packed in cardboard boxes.

The Hauran region’s raha factories resumed their commercial activity of selling their products to the rest of the Syrian governorates after re-opening roads between them. They were also able to export the sweets to the Arabian Gulf region and Jordan, following the re-opening of Nasib border crossing, which has been closed twice because of the spread of the novel coronavirus (COVID-19) pandemic since last March.

During the war years, the raha industry in Daraa was affected by the destruction of a number of industrial facilities, the cutting of roads, and the isolation of regions from one another and from the rest of the provinces and countries.

Of the 32 raha making facilities operating before 2011, 12 returned to business, the head of the administrative and legal office at the Union of Crafts Associations in Daraa, Ayman al-Damad, stated to the state-run Syrian Arab News Agency (SANA) last September.

Nevertheless, the raha industry was not spared from troubles after re-opening the roads and stopping the bombing of its facilities, as Syria’s economic crisis also affected it, the owner of a raha factory in Daraa, who asked not to be named, told Enab Baladi.

The deterioration of the security situation, despite its disadvantages, has maintained a fixed price for the Haurani sweets, said the factory owner. “Now we suffer from a shortage of basic materials to this industry such as starch, sugar, and others. Not to mention the prices that fluctuate every day because of the Syrian pound’s unstable exchange rate against the foreign currency (US dollar) that traders use as a pretext to raise the commodities prices.

The higher prices of fuel and the inability to provide it to industrial facilities have had a negative impact on the operation of plant machinery. In addition, the high cost of production forced the raha factories to raise the price of their products, as the cost of 1 kilo reached the price of 1,500 Syrian pounds (SYP =0.524 USD) after it was sold at the price of 700 (SYP = 0.244 USD) at the end of 2019.

Last October, the Syrian government raised unsubsidized industrial and commercial diesel prices from 296 to 650 (from 0.103 to 0.227 USD). Gas prices also rose due to its shortage in distribution centers of subsidized gas, which factories rely on heavily. The price of a gas cylinder sold in the stalls reached 40,000 (SYP =13.962 USD).

Daraa city council issued a decision in 2019, forcing industrial plants and technical workshops, including the raha factories located within the city, to move their facilities to the industrial zone east of Daraa, after the council promised to equip the industrial area with technical and service facilities. However, the factory owner complained to Enab Baladi about the lack of provided technical services, which impede the direct supply of products from the factories. He added that the raha sales declined 40 percent from what they were before the war.

Iman, a thirty-something-year-old woman from Daraa, stands in a grocery store in Tafas town in western Daraa countryside to buy two packs of raha sweets and one kilogram of plain biscuits.

Even though Daraa province has many raha factories, quality remains the basis for selling in the market. “The people of Daraa are big consumers of this sugary delight. They recognize all its types and know the best among which to choose,” Iman said to Enab Baladi.

Before buying the raha sweets, Iman checks the production date written on the pack, as she prefers a newly-manufactured raha. She said, “when the raha date of manufacturing is old, the moisture affects its quality, especially in winter.”

Moreover, the raha sweets come with different toppings, such as nuts, cashew, and pistachio. Other types are flavored with sesame and coconut sprinkles, besides the regular plain raha.

Umm Hassan, a housewife and mother of four children, finds raha to be the best option available within other Syrian sweets’ high prices. The price of a kilogram of Arabian sweets is no less than 3,000 (SYP = 1.047 USD), making sweets a luxury to afford.

Mohammed al-Mustafa, a sixty-something-year-old man from Daraa countryside, prefers raha over the rest of the Syrian sweets. “It is light, delicious, and easy to digest. I prefer the regular plain raha, and always keep several packs, especially in winter,” he said to Enab Baladi.

Al-Mustafa recalls his childhood days and how happy he used to be when his father used to buy raha for the family. He said the raha industry is old in Daraa province, as it started in the 1960s, but it became more advanced over time and included more diverse types. Nevertheless, “the raha sweet maintained its quality and delightful taste,” al-Mustafa said.