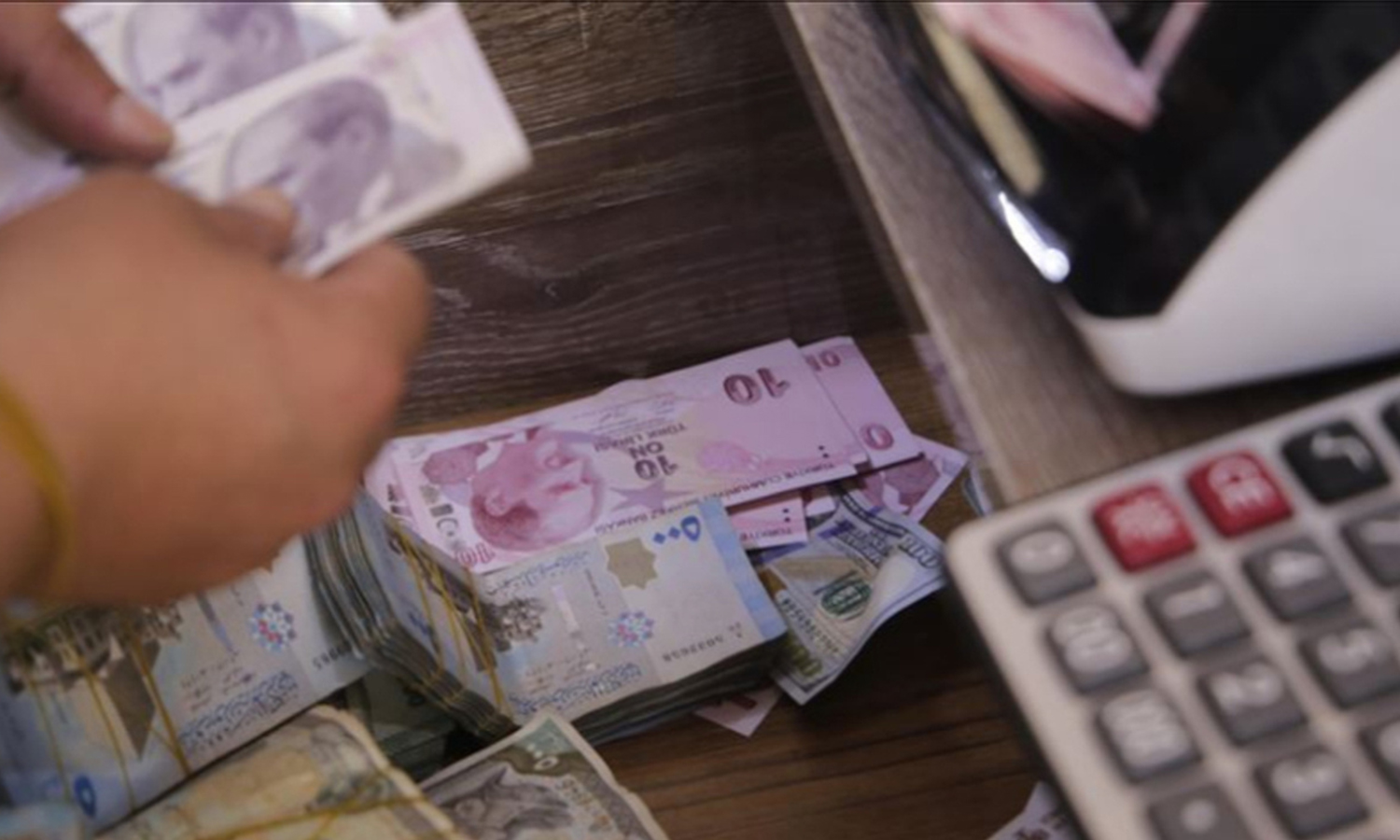 “ I, as a citizen, do not care about the economy in its scientific concepts, nor do I care about the economic policies pursued by the governments. My primary concern, in fact, is to live a life of dignity, secure a sufficient source of income, and meet my basic necessities for a decent life in a safe society.”

Abdul Qadir Abu Diaa, a displaced person in the city of Idlib and married with one girl, believes that the living conditions of Idlib’s people in the period before the switch to the Turkish lira in northern Syria were “better” than the conditions experienced after the Turkish currency was adopted.

Abu Diaa pointed out that even though he enjoys “adequate” living conditions, compared to other displaced people in the area, due to the small number of his family members.

People were optimistic about replacing the plummeting Syrian pound with the Turkish lira.

However, even if this change in currency is really positive from an economic point of view, this change turns out to have negative impacts on citizens,” Abu Diaa told Enab Baladi, protesting against high prices in northern Syria after the Turkish lira’s value against the US dollar deteriorated over the past few days.

Abu Diaa added that “The phrase ‘high prices’ is sufficient to create psychological anxiety among the citizens” regardless of the income they receive as there is no balance between families’ expenses in the north, especially the displaced families, and their monthly incomes, especially when it is related to the Turkish lira exchange rate.

Abu Diaa believes that fixing prices of commodities in the Turkish lira is a relatively good measure because it somewhat restricts manipulation of prices, “especially among greedy traders.”

However, the price control and supply department operating in northern Syria does not efficiently play its role, which causes an adverse impact on controlling prices properly.

On 14 November, the Turkish lira was trading at 7.67  to the US dollar for purchase and 7.68 for sale, according to the “Döviz” website (a Turkish lira tracking website).

The switch to Turkish money in norther-western Syria has not solved the problem of discrepancy in food and non-food products’ prices. The prices have not been stabilized because these products’ pricing is subject to the Turkish lira exchange rate against the US dollar.

Khaled al-Hussein, a displaced person from the southern countryside of Idlib to the city of Idlib, confirmed that the currency change in northern Syria led to great price fluctuations; commodities are sold differently from one commercial store to another.

Al-Hussein told Enab Baladi that the price differences are uncontrolled, pointing to the absence of supply or economic oversight measures.

Al-Hussein added that most of the displaced people in northwestern Syria rely for their financial resources, mainly on agriculture, due to the absence of industrial resources in those areas.

The displaced people have lost their source of income. They are also suffering high housing rents that are “exploited as trade due to the high numbers of displaced persons,”  All these creates economic pressure on them. Not to mention that the displaced people face almost daily collision with changing prices, which reduces their purchasing power.

Regarding sellers’ failure to control the fluctuating prices of products in the shops, Enab Baladi conducted an opinion poll among a group of sellers in Idlib and confirmed that their trade was harmed by the recent fluctuations in the Turkish lira’s exchange rate against the US dollar.

The owner of the “Rahman” store in Idlib, Ruwad Saeed, explained that the stores’ products seem to be priced in Turkish lira, but actually, they are priced in the US dollar.

“I write the prices of the products that I buy from a wholesaler on a paper in US dollars,” Saeed told Enab Baladi.

Saeed added that he buys commodities in US dollars, especially foodstuffs in all their types, canned food, ghee, and others.

Saeed added that the prices of products are set according to the Turkish lira’s daily exchange rate against the US dollar. Since the Turkish lira experienced during this period “compound” conditions: upward or downward swings. As a result, the sellers are forced to deal with product pricing in the same way as in the period before the Turkish lira was adopted.

Saeed highlighted that the sellers are being criticized by citizens who consider them to be “exploitative,” saying that he does not deny that some exploitative sellers do not lower the prices of products when the US dollar drops.

He also explained that they, as shopowners, share “the pain and suffering of the displaced people” and are aware of the lack of job opportunities and of balance between income and expenses, “but in the end, the sellers are also among the common people, who have children, and are affected by the high prices of products like the rest,” as he put it.

Al-Hussein talked about the loss inflicted on sellers by the currency change, indicating that the ghee tank’s price, for example, is 16 US dollars, which is a fixed price. When the US dollar was about seven Turkish liras, one ghee tank was approximately worth 100 Turkish liras. The seller sold it for 110 Turkish lira at that time, so the profit margin was one US dollar or half a US dollar.

Whereas if he kept the price in Turkish lira and did not raise its price after the increase in the US dollar exchange rate, the tank price would be less than 16 US dollars, and it would be approximately 14 or 15 US dollars, which could a loss for a seller.

Where is the oversight role?

The Salvation Government (SG)’s ministry of economy operating in Idlib, via its official media platforms, post videos of supply committees conducting oversight patrols in the shops and markets of the cities and towns of the Idlib province, controlling commercial transactions in Turkish lira, monitoring the validity of products and taking actions against businesses who commit price-gouging.

The public relations official at the SG’s ministry of economy and resources, Muhammad Daaboul, explained, in a previous interview with Enab Baladi, that it is difficult to set a unified price for all products, given there are imported products, whose prices are controlled by the US dollar, locally produced materials, and materials produced locally but with imported materials.

Daaboul said that the government divided the essential supplies of people into four sections, the most prominent of which is a strategic one, such as bread, fuel, and human medicines, and a basic section such as bread, rice, tea, and vegetables. The SG has set a unified price for bread and fuel.

The SG and the Syrian Interim Government (SIG) decided to replace the Syrian pound with the Turkish lira last June after the markets in northern Syria saw daily fluctuations in the commodity prices, with the value of the Syrian pound falling sharply. The pound is trading at 3,000 pounds to the US dollar.

The correspondent of Enab Baladi in the city of Idlib, Shadia al-Taataa, contributed to preparing this article