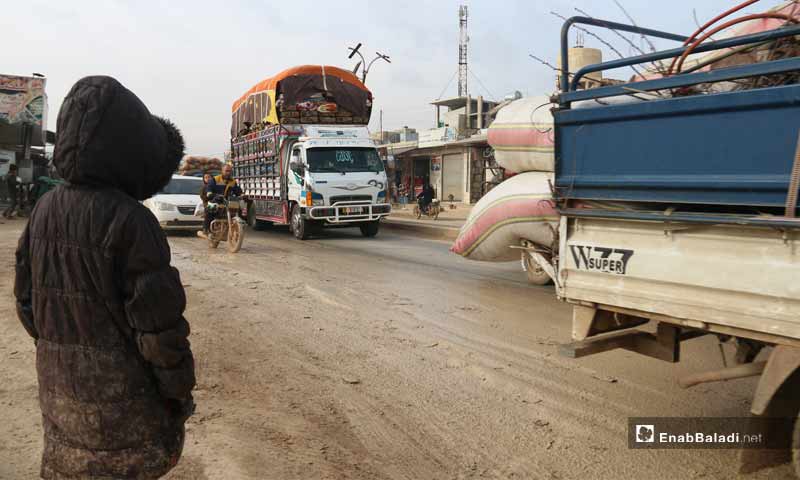 Thousands of civilians have reportedly fled from the Jabal Zawiya region and the city of Saraqip in the countryside of Idlib, heading to safer areas near the Turkish border.

The correspondent of Enab Baladi reported on Monday, 27 January, that a massive wave of displacement is taking place in the last rebel-held areas in the Jabal Zawiya region and the cities of Saraqip and Ariha, to Turkey’s borders in northern Syria.

A displaced woman told Enab Baladi that the military advance of the Syrian regime forces in the eastern countryside of Idlib and the residents’ fear for blocking roads between the cities and towns have triggered a big wave of displacement.

The displaced woman added that the aerial bombardment by helicopters and warplanes did not stop throughout the whole night, indicating that civilians are displacing towards the unknown on the Turkish border.

The Syrian Response Coordinators Group (SRCG) documented the displacement of more than 5,000 families from the cities of Ariha, Saraqib and Khan al-Sabil during the past 24 hours.

The SRCG announced a state of emergency among its civilian groups, to follow up on the recent wave of displacement, and also called on international organizations, human rights organizations and offices of the United Nations agencies to condemn the military escalation of Russia and regime forces.

The movement of displaced people comes after the Syrian regime cut off the M5 international highway, which links the capital Damascus with the northern city of Aleppo and re-took control of many towns on the outskirts of the city of Maarat al-Numan.

The Syrian regime forces are attempting to cut off the city of Maarat al-Numan from the northern countryside of Idlib, as they blockade the roads connecting between the cities of Maarat al-Numan, Saraqib and Ariha.

The Jabal Zawiya is considered a strategic area due to its height and its view of large areas in Idlib, especially the al-Ghab Plain, which made it difficult for the regime forces to control it.

The National Liberation Front (NLF), for its part, announced that it targeted the al-Assad forces gathering with Grad rockets in the village of Tell Mannas in the eastern countryside of Idlib, which resulted in injuries