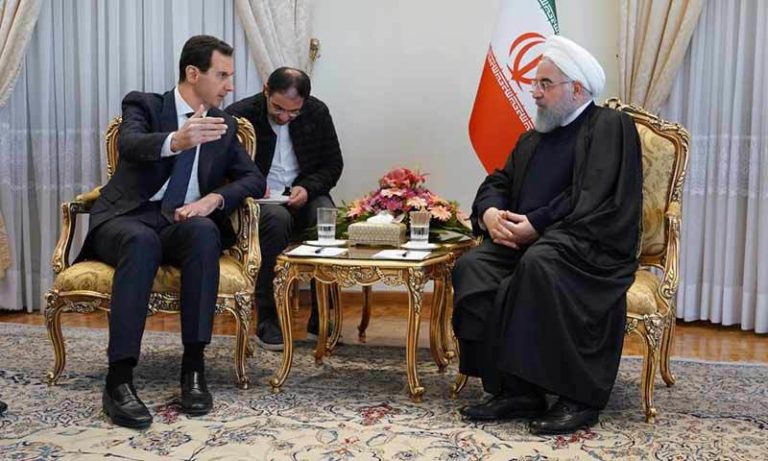 President of the Syrian regime Bashar al-Assad and Iranian President Hassan Rouhani - February 25, 2019 (Presidency of the Republic of Syria) 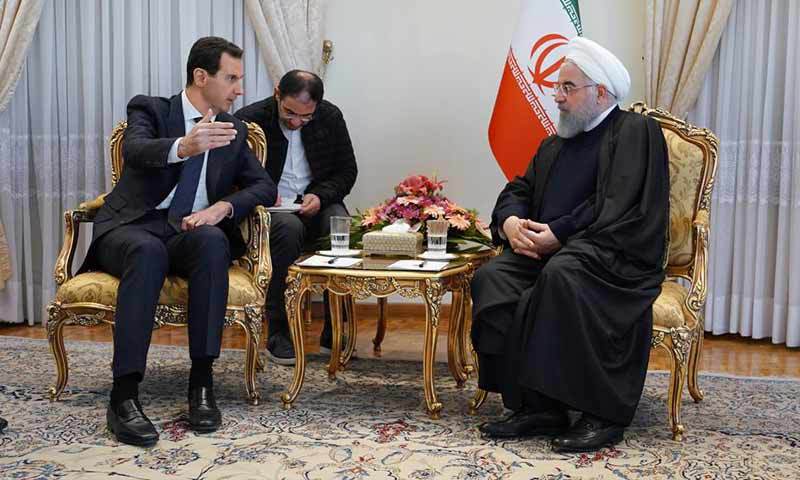 Taim al-Haj, Enab Baladi | A look at the course of the battles and agreements concluded in the Eastern Euphrates region, the most intense point in Syria for more than a month as a result of the battles and the new deployment there, will lead to the conclusion that the scene seems clear to the acting parties and their goals. It is also clear that Iran and its militias, which have always accompanied the Syrian regime in all its military tours in Syria, are completely absent there.

Iran, which has been absent from the battles in eastern Euphrates, namely between: the Syrian National Army on one side and the Syrian Democratic Forces (SDF) reinforced by regime forces on the other, in two areas of northeastern Syria (Ayn Issa and Tell Tamer), is strongly present in another field in the country that reinforces its attempts of social expansion and economic penetration, by continuing to sign agreements with the Syrian regime.

Tehran turns to the electricity sector

While Turkey was preparing to launch the Operation Peace Spring in early October, with the aim of removing the SDF, whose backbone is the Kurdish People’s Protection Units (YPG), Tehran was preparing trade deals with the regime, particularly in the electricity sector.

The increasing agreements between the regime and its ally Iran had been noticeable after the cessation of battles in Idlib late August. These agreements are part of the Iranian attempts to acquire a place in the reconstruction market in Syria, despite international, especially US, warnings.

The most recent of these agreements between the two parties was signed a few days ago, which includes the electricity system and the development of electricity equipment in Syria.

On November 7, the minister of electricity in the government of the Syrian regime, Mohammad Zuhair Kharboutly, said that an Iranian company will visit Syria to sign a contract for the rehabilitation of the Aleppo power station.

Kharboutly explained that the financial scheduling included in the contract with the company would cost 63 billion Syrian Pounds ($ 93 million), according to local newspaper al-Watan.

The government of the Syrian regime signed in early September a cooperation agreement with an Iranian company to generate electricity in the area between Homs and Hassia, according to the official Syrian news agency (SANA).

The electricity sector is one of the most affected sectors in Syria during the previous years of the revolution, according to the director of electricity distribution in Damascus, Mustafa Sheikhani, who said in August 2018, that “it is one of the most vital sectors that has been targeted and subjected to sabotage and suspension attempts.”

In July, Iranian activists said that the Iranian Jihad al-Bina foundation had worked to build a power conversion plant near the towns of Nubl and Zahraa in the northern countryside of Aleppo.

The activists explained that its reconnaissance power is 66-20 kV, and its cost is estimated at one billion 3,000 Syrian Pounds (two billion 80,000 US dollars).

Iran’s attempt to control the electricity sector in Syria is not new. Tehran bases this on old aspirations, which stated before 2011 and specifically in 2009, when electricity meters were leased from Iran to be installed in Syria, with the aim of raising and liberalizing electricity prices over stages. However, the outbreak of the Syrian revolution led to the postponement of this project.

In an earlier interview with Enab Baladi, economist Younes al-Kareem considered that Iran wanted to acquire investments through the electricity sector, because Russia is now controlling most of the Syrian state’s parts.

Al-Kareem also told Enab Baladi that through the electricity sector, Iran wants to be close to the middle circle, meaning traders, industrialists and poor Syrians, by supplying them with electricity, to win their support, control them and get  their loyalties.

A number of Iranian officials expressed their rejection of Operation Peace Spring, which was launched on October 9, and stopped 14 days later in light of an agreement between Moscow and Ankara preceded by an unsuccessful agreement between the latter and Washington.

Tehran has maintained the same position on the operation and has called in repeated statements for adherence to the “Syrian territorial integrity” and the Adana Accord as the only way to achieve peace and stability.

The most prominent Iranian statements on Operation Peace Spring, were Tehran’s rejection of the establishment of Turkish military bases in Syria, considering that these bases “violate” the national sovereignty of Syria, Mehr News Agency quoted Iranian Foreign Ministry Spokesman Abbas Mousavi as saying.

For his part, Turkish President Recep Tayyip Erdoğan criticized Iran’s position on Operation Peace Spring. “There are annoying voices raising from the Iranian side about Operation Peace Spring, and Mr. Rouhani should have silenced them, as they are bothering me and my fellow politicians,” said Erdoğan in a press conference in Ankara on October 22.

The latest meeting between the two presidents, Hassan Rouhani, and his Turkish counterpart, who are key parties in the Astana path alliance triangle (Turkey, Iran and Russia), took place less than a month before the launch of Operation Peace Spring.

In the context of Astana, political analyst Hassan al-Naifi said in an interview with Enab Baladi that it has become noticeable that Tehran’s role in Astana path has started to fade to a point it has become marginalized.

Al-Naifi also pointed out that there is a new reality that is currently imposing itself on Iran, in the light of the revolutions that broke out in Iraq and Lebanon, in addition to the protests that erupted in Iran over the deteriorating living situation.

“These revolutions, along with the Syrian revolution, are undoubtedly facing one enemy, which is Iran,” said the political analyst.

Al-Naifi noted that Tehran is now in dire need for its militias deployed everywhere, to fight with it inside Iran, considering that Iran has become preoccupied with defending itself or the systems or direct arms that it controls.

“In the past few days, we have seen Iranian militias hitting protesters in Iraq, and Hezbollah militias attacking demonstrators in Lebanon,” added al-Naifi.

He explained that the Iraqi revolution is demanding Iran’s withdrawal from Iraq and the demonstrators in Lebanon are calling for curtailing Hezbollah’s influence. This applies to the Syrian revolution as well, as he put it.

Al-Naifi concluded that “Iran is an enemy to the peoples of the three countries, and there is currently a large revolution inside Iran, making it in a state of recession.”