Silhouette in Beirut and Saraqib: A Tribute to Zaki Cordello 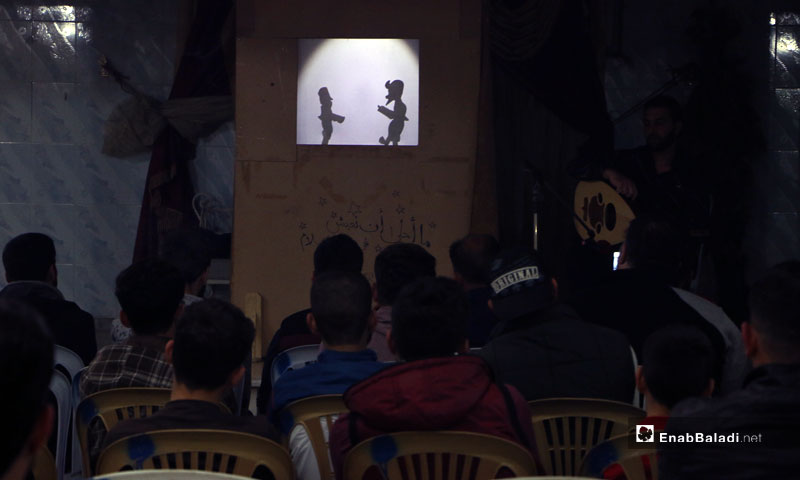 From Beirut and Saraqib, the Mayyas Theater Group has dedicated two silhouette plays by Syrian artist Zaki Cordello, who has been detained since 2011.

Despite the escalating military operations around the town of Saraqib and its designation as a target area, the play was performed on May 11, along with other activities such as oud playing and video screenings.

The playwright Waleed Rashed Shlash, a member of the Mayyas Group that presented the show in Saraqib, said the aim of the show was to bring Syrians all over the world on one stage, and to address their problems and concerns, from arrest to displacement.

“This work has touched on reality because it combines several binaries in one show; two people in detention, two running loose, and two trying to travel illegally,” he told Enab Baladi.

Shlash pointed out that naming this work after Cordello was a form of dedication to him. “He was the most recent detainee who tried to preserve this important heritage of Syrian art since 1993,” he added.

Since 1980, Cordello has written dozens of theatrical works, worked as a director, and specialized in silhouette, in addition to his participation in some TV shows and movies. He had also previously served as director of Al-Hamra Theater in Damascus.

The current show is considered a trial run of the play, which is to be officially performed on August 12, exactly one year after the artist Zaki Cordello’ arrest, according to Shlash.

Zaki Cordello and his son Mehyar were arrested on August 11, 2011 by the Syrian regime, with no information about their whereabouts revealed or legal proceedings taking place afterward.

With the start of the Syrian revolution in 2011, Cordello opposed the regime’s repression and killing of protestors. On his Facebook page, he published statements condemning the massacres and killings, which led to his arrest.

The works of art of the current show fall within the concept of shadow plays, also known as silhouette, a folk art based on the use of hand puppets behind a transparent curtain or behind a screen inside a dark theater, with a source of light behind the curtain reflecting the shadows of the puppets to the audience.

In Syria, the art of silhouette is famously represented by the “Karakoz and Awaz” characters, the naïve Karakoz and the clever Awaz. The idea has originated in the Syrian capital Damascus, where it was renowned for being a folk art that people engage with in public cafes.

In November 2018, the United Nations Educational, Scientific and Cultural Organization (UNESCO) included the Syrian shadow play Krakoz and Awaz in the list of World Heritage Sites which need urgent protection.

UNESCO stated that the art of silhouette in Syria has been declining for years, especially after the spread of modern technology and digital devices, noting that the show has become limited to folk festivals only, and that there is only one puppeteer left in Damascus.