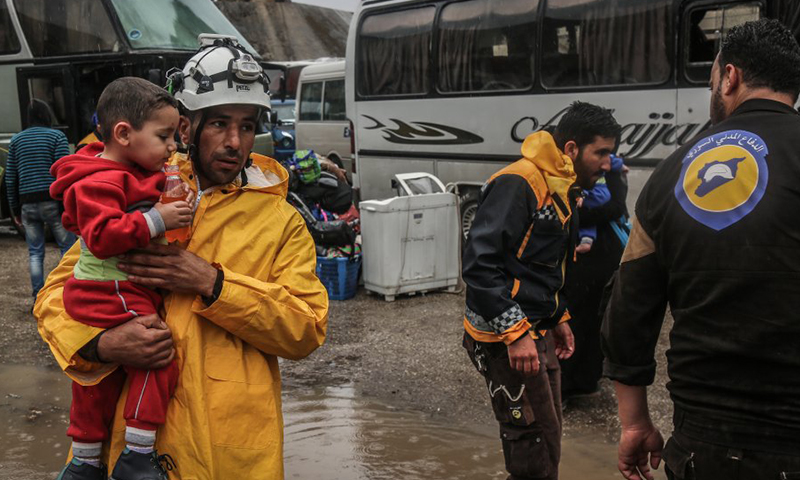 The Jordanian MP Tariq Khouri has called for remaining Syrian Civil Defence Forces to be handed over to the Syrian government for trial, or otherwise deported from Jordan.
Khouri said during a session in the Jordanian parliament on Sunday 16 December: “I request that those ‘White Helmets’ remaining here to be handed over to Syria, or be expelled from Jordan to other countries. They are a terrorist organisation, and accomplices in reported chemical weapons atrocities”.
The MP’s speech came days after a response from the Jordanian Interior Minister to parliamentary questions directed to him by Khouri at the end of October. These questions concerned the entry of White Helmets into Jordanian territory, how many were present there, and how much of a danger they represented to the country’s national security.
The Interior Minister, Samir al-Mubaydin, said that 422 members of the White Helmets had entered Jordan last July via the Sheikh Hussein Bridge – the border crossing between Jordan and Israel – under the supervision of the United Nations.
Al-Mubaydin explained at that time that members of the White Helmets were residing in a special, separated area inside the al-Azraq refugee camp which was opened in north-eastern Jordan. Of these, 377 had been re-settled in countries of the European Union, while those remaining were awaiting re-settlement.
The Jordanian Interior Ministry on 22 July affirmed via its spokesman, Muhammad al-Kayed, that Jordan had agreed to the White Helmets passing into national territory on purely humanitarian grounds.
The spokesman highlighted that the members of the White Helmets permitted entry had been working in rescue operations in opposition-held areas, and had been forced to flee once the Syrian Army had entered those areas.
The most prominent of Khouri’s remarks during his parliamentary speech related to the White Helmets’ entry to Jordan via Israel, as Khouri himself comes from a Palestinian background. Khouri is also a member of the political bureau of the Syrian National Party, which was founded in Lebanon in 1932 and calls for the establishment of a “Greater Syria” extending from Iran to the Sinai Peninsula (or what the party refers to as “the Fertile Crescent”).
As shown by Khouri’s posts on Twitter, his activities are focused on helping to restore relations between Syria and Jordan. He has played a role in the Jordanian authorities’ permitting of vehicles owned by Syrians and holding Syrian license plates entering national territory once more.
The relationship of Khouri – who met with President Bashar al-Assad in November – with the Syrian government has also facilitated the release of Jordanians detained in Syria and their return to their country.

The impact of Jordanian MPs on Syrian Refugees

Jordan has not been immune from the phenomenon of hostile or hateful speech directed at Syrian refugees – this in fact has grown as numbers of Syrian refugees in Jordanian territory has increased.
These attitudes have clearly extended as far as the Jordanian parliament, where pressures on Syrians among MPs have varied between calls for refugees to be returned to their homes and for Jordan’s borders to be closed to people displaced by conflict. Other MPs have also called for Syrians not to be allowed to leave refugee camp areas or approach Jordanian towns.
Alongside other issues, Jordanian MPs’ hostility toward refugees has found fertile ground in the national media, which has impacted upon public opinion and turned sympathetic views toward displaced Syrians into dislike. This situation has been ongoing for some years, as shown by a similar conclusion expressed by the Jordanian media affairs researcher Susan Zayada during an interview with the website “Syrians Among Us” in 2014.
The Jordanian newspaper al-Dostour published an article in 2017 that stated that out of all references to Syrian refugees in the country’s press the rate of hostile commentary was 13%, based on a media study.
Since 2013, the issue of Syrian refugees in Jordan has featured regularly in Jordanian parliamentary debates. According to the Jordanian media, the topics of these discussions have included finding ways to ease the burdens on Jordan due to influxes of refugees, and ensuring the commitment of foreign countries to maintaining their funding of refugees based in Jordan via the UN.
In 2014, the Jordanian MP Mustafa al-Rawashida, head of the parliament’s Integrity and Transparency Committee, called on the government on more than one occasion to put a stop to the country offering asylum to Syrian refugees. This coincided with the government implementing a new visa system for the entry of Syrian nationals, and severely restricting the inflow of refugees via Jordan’s land borders.
During the same year, the government established new conditions for Syrian refugees being permitted to leave camp areas to approach towns and cities, and started to review a “Kafala” (guarantor) system in order for refugees to be allowed access to non-camp areas.
Human rights organisations have feared for the safety of Syrian refugees recently returning to their homes within Syria. This has particularly been due to the Syrian government not permitting these organisations, including those linked to the UN, from monitoring the safe return of refugees and their safe living conditions subsequently.
Since the re-opening of the Nassib border crossing between Jordan and Syria, the Syrian regime and Russia have been promoting the return of waves of displaced Syrians from Jordan, usually in groups of dozens or hundreds; however, their claims are not consistent with data from the UN.
Figures released by the Jordanian government have said that at least 5703 displaced Syrians have now returned to their homes. However, this is at odds with recent statistics from the UNHRC, which claims that 3852 Syrians have returned from Jordan to Syria following the opening of the Nassib crossing on 15 October until the beginning of December.
Human Rights Watch had previously stated in an October 2017 report that the Jordanian government had been engaging in mass deportations of Syrian refugees, including large families. The Syrians meanwhile have no real recourse to challenging their deportations, and the Jordanian government has not considered their need for protection after leaving the country.
In a report titled “I Don’t Know Why They Sent Us Back – Jordan’s Deporting of Syrian Refugees” Human Rights Watch documented that, in the first five months of 2017, Jordan deported around 400 registered Syrian refugees in the country each month. Also during this time, 300 refugees were deported monthly under supposedly “voluntary” circumstances, while a further 500 monthly left for unclear reasons.
Within Jordanian territory there are five camps for displaced Syrians. The largest of these is the Zatari camp, with others including the Murayjib al-Fahoud camp, the al-Azraq camp, and the al-Hadiqa camp. There is also a camp for Palestinian refugees, named the “Cyber City” camp,