The Stability of Damascus’ Surrounding Eases the Capital City’s Congestion 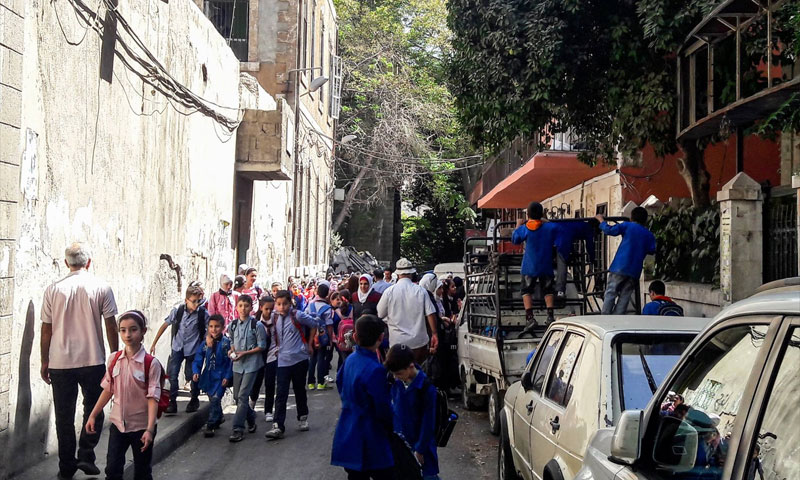 Children getting out of their school at the al-Halbouni neighborhood, Damascus city – September 25, 2018 (Lens Young Dimashqi)

Due to the internal displacement and the massive shifts in the population’s locations, starting in 2013, the Syrian capital city, Damascus, suffered a non-relenting congestion, effected by the increasing hostilities that triggered people to chose it as a place of residence; this changed the city’s population’s combination and specification at various levels, especial society, economy and culture.

Many changes have also taken place in relation to displacement, migration, refugee movement and food security, which have changed the area’s capital.

In statements issued by the government’s High Relief Committee, the latter said that Damascus, late in 2016, has received about 862 thousand internally displaced persons, ranking the second following some of rural Damascus’ area, which the opposition did not enter or others that enjoyed a relative stability during the years of war.

The statistics, according to what has been quoted by the “al-Akhbar” Lebanese website, the people displaced to the capital are a mass consisting of about 31% of Damascus’ population.

Repercussions Effected by the Displaced Population

Several problems followed the massive displacement of the population which the capital city Damascus has witnessed, the first of which is the housing dilemma, over crowdedness, deteriorating services and the lack of electricity, which traffic is part of its impacts.

Traffic is not limited to road traffic, for it extended to bakeries, the queues at the fuel stations and other basic daily needs demanded by the citizens. The crowdedness increased at the gates of the government’s departments, including the migration, passports, recruitment departments, civil status offices and others, in addition to the transportation which fail to cover the people’s demand.

Khalid, employee at the Ministry of Finance, Damascus, told Enab Baladi that the population traffic in the area has caused many crises, on top of which is in the transportation sector, pointing out that the public transportation means are no more capable of covering every one’s needs.

The rise in the prices has also turned into a problem, and of the key reasons to this increase is the collapse of the value of the Syrian pound, but the demand on food materials led to a decrease of their prices, which also applies to rents and real-estate. The properties’ rents, in areas near the capital city, which are not central, have jumped from 20 thousand to 85 thousand Syrian pounds. The rents costs vary according to the area and the house’s location, but on average they have increased with 65%, according to Enab Baladi’s observation of the prices in several areas in a comparison between 2011 and 2017.

Solutions Finding Their Way to the Surface

After seizing all the areas of rural Damascus from the opposition, the government of the Syrian regime started to focus on the development and the repair of roads, as well as the simple restoration of the infrastructure of the areas it recently controlled. The government has also been keen on launching festivals and events in those areas, such as the “al-Sham Btejma’ana” (Damascus Brings Us Together), organized in eastern Ghouta last June, as to urge the displaced people to return to their towns.

The very high rents have contributed to pushing further the desire of a relatively sufficient number of the people displaced from rural Damascus to return to their towns, due to the decreasing purchase power and the deteriorating living conditions of the families.

The United Nations estimates, according to its needs’ assessment for 2018, that 69% of Syrians live in extreme poverty.

Salma, a 35-year-old housewife from eastern Ghouta, said that she returned with her children on the first day after the Ghouta road reopening was announced, just to alleviate some of the family’s financial burdens

The Head of the Syrian Commission for Family Affairs, Mohammed Akram al-Qash, said that the Commission has drawn up a full plan called “post-crisis Syria,” which will be a comprehensive development program based on two stages, the first is about bridging the gap and the second addresses developmental recovery.

The main objective of the plan is to preserve the social fabric and its diversity and to return the citizens to their normal place of residence, according to Al-Qash, who said that Damascus was among four governorates, in addition to Suweida, Tartous and Lattakia, whose development indicators were affected by the influx of population, for the massive pressure had an impact on the services sector, education and healthcare in particular.

Between the problems of the population’s displacement that have negatively affected the infrastructure and the rehabilitation of infrastructure in the areas from where the people were displaced, the people of Damascus and the surrounding areas are waiting for other opportunities to get better services to help them overcome their daily life’s burdens.