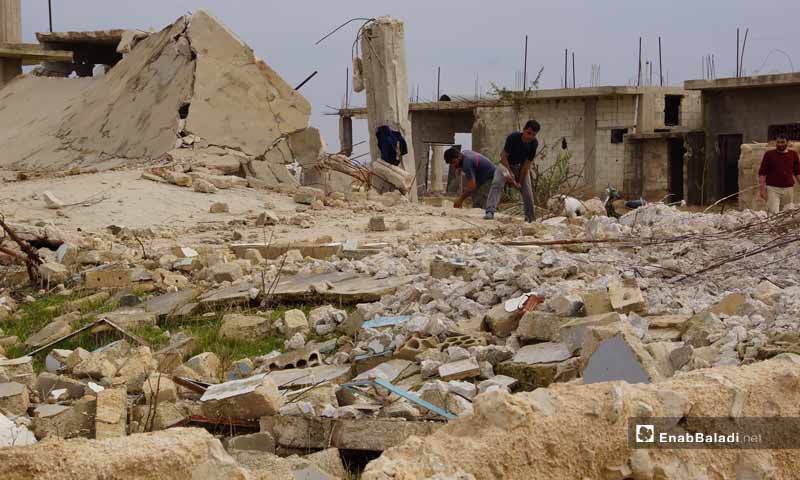 Several villages in northern rural Hama are yet empty of their population despite the latest deal between Russia and Turkey, which provided for the establishment of a demilitarized zone at the confrontation lines between the Assad’s forces and the opposition factions, which meant the cessation of war at this area’s villages and was, thus, supposed to lead to the return of the displaced people. However, the continuity of the Syrian regime’s shelling prevented the people from going back to their homes.

Due to the shelling which neglected the signed deal, the people of the towns of Hasraya, Maarkaba and al-Arbain, northern rural Aleppo, cannot return to their homes, despite the adjacent towns’ people’s return to their areas, according to what Alaa Abu Hamza, a media activist in northern rural Hama, has told Enab Baladi.

Life is almost absent in the above mentioned villages because of the destruction and the lacking drinking water, electricity, healthcare, education and other basics, according to Abu Hamza, who pointed out that the costs of providing the “bottom limit” of needed potable water are lavish, for the price of a single water tank has exceeded the mark of 500 Syrian pounds, while the local councils at these towns are calling on the concerned entities and the Hama Governorate Council to interfere.

Alaa al-Mahmoud, member of the al-Arbain Village Local Council, told Enab Baladi that the village is almost completely destroyed, pointing out that the majority of the adjacent villages’ people has returned to their towns, but the people of the al-Arbain village were prevented from returning by fear, constant bombardment and the massive destruction that befell their homes.

The partial and complete damage of the civilians’ homes in the area exceeded 80%, according to the Local Council’s member.

The areas people are living in the camps at the adjacent areas under difficult conditions, according to Amer al-Mubarak, a man from the village of al-Arbain, who pointed out that his home is completely destroyed, similar to the homes of the majority of the area’s civilians.

The villages of al-Arbain, Hasraya and Maarkaba are covered by the demilitarized area, agreed upon by Russia and Turkey.

According to the al-Arbain Local Council, about 50 families only have returned to their villages, at a time where the rest of the villages’ people are afraid from going back to their homes due to their areas’ proximity to the areas controlled by the Assad’s forces and the ambiguity engulfing the real fate of the area and the deal’s future.

The village of al-Arbain is three kilometers away from the village of Jibbain, which Assad’s forces have control over as a center, from which they target other areas.