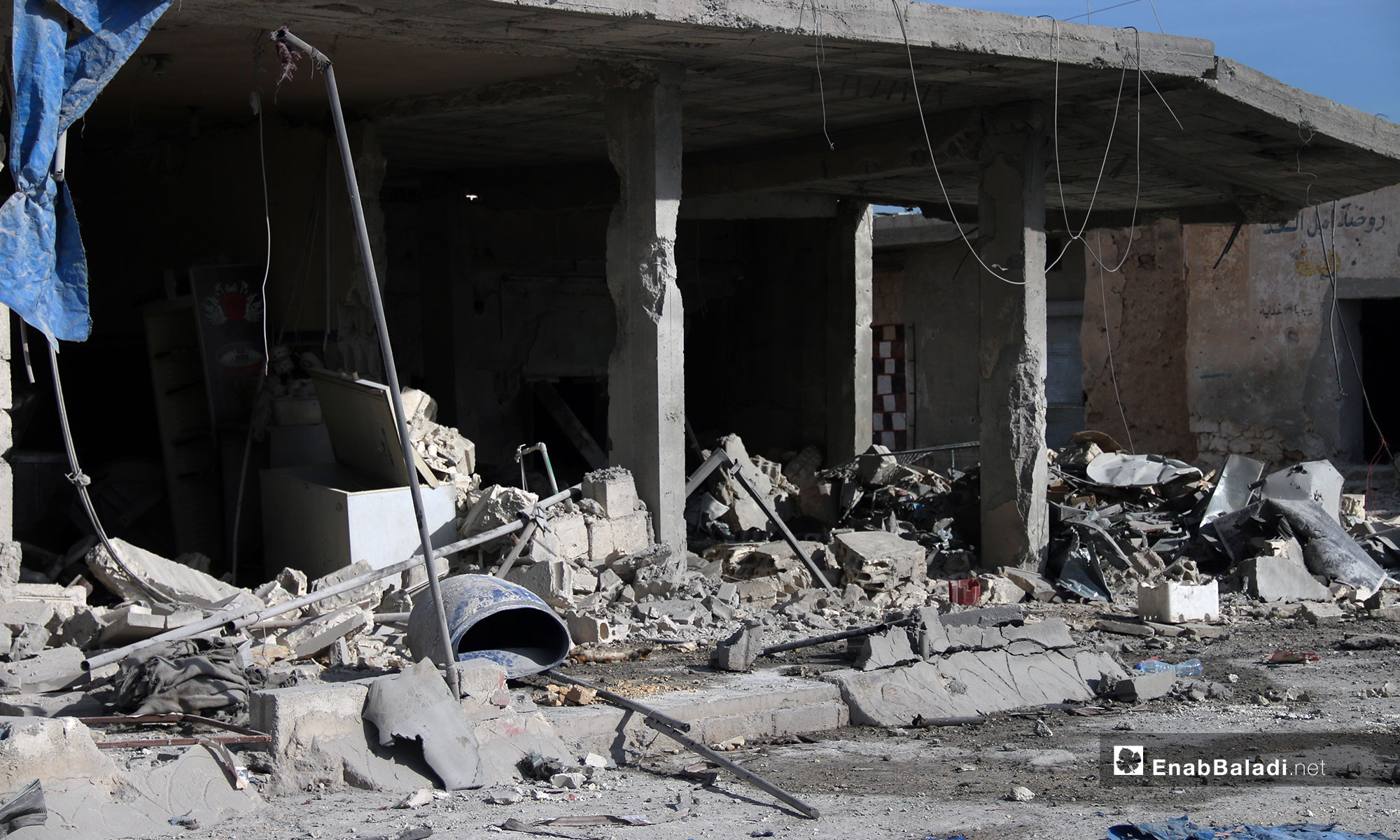 The destruction caused by the shelling of the town of al-Tah, rural Idlib – February 4, 2019 (Enab Baladi) 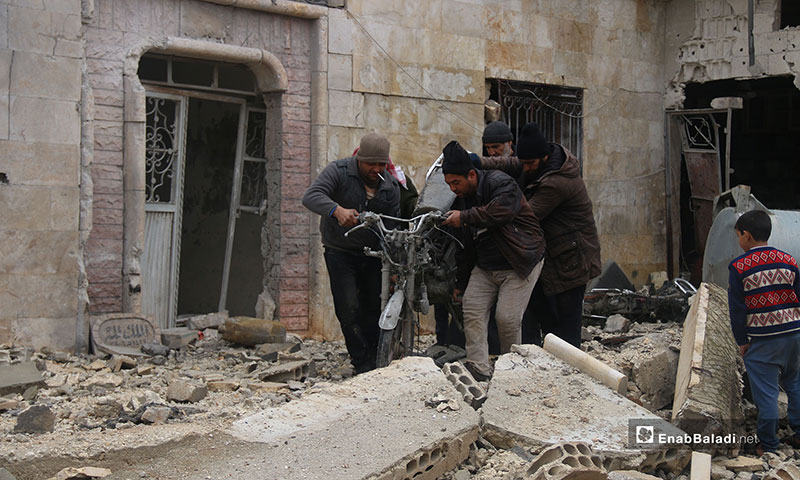 Five months passed since “Sochi” deal was concluded between Turkey and Russia concerning Idlib governorate. However, the deal was not enough to deter the Syrian regime’s shelling, and artillery and missile attacks, which so far caused several casualties among civilians, dead and injured, in the past months, and pushed a massive segment of the civilians out of the buffer zone, the demilitarized area agreed upon.

The civilians were displaced to the border areas, escaping the escalation which tempo has been on the rise since the beginning of 2019.

In sync with the missile and artillery shelling, focused on the eastern and southern rural parts of Idlib and the northern and western rural parts of Hama, the regime’s political statements did not ceases, stressing that Idlib governorate “is to return to the embrace of the Syrian state after the removal of terrorism from it” and the military operation that Russia hinted at on the pretext of annihilating the “extremist” groups and foreign militants.

On the other side, there is not any serious action on the part of the opposition factions, which, in the past a few days, witnessed a state of confusion after the expansion of Hayat Tahrir al-Sham/HTS’ control areas and the eyes  turning to the steps that the latter would be taking in relation to Idlib’s future and the elimination of the “terrorism” allegation attached to it.

85% of the People Displaced

The ongoing missile and artillery shelling on the part of Assad’s forces forced the majority of the demilitarized zone’s population to leave the area to ones witnessing lighter shelling, located in the city of Idlib and the areas at the borders with Turkey.

On February 9, the “Response Coordination Group” published a statement, saying: “Backed by Iran and Russia, the Assad’s forces and their militias continue to violate the latest deal about the demilitarized area in Idlib.”

The attacks on the part of Assad’s forces have also caused massive damage of infrastructure and residential neighborhoods; and several towns and villages, al-Tah, Jarjanza, al-Tamanah included, were declared as stricken areas.

The matter was not limited to shelling, for Idlib’s aerial space witnessed an enhanced presence of the Russian air force and reconnaissance aircraft, especially along the key fronts of the Syrian regime and the opposition.

According to Enab Baladi’s correspondent, the air force and reconnaissance aircraft did not part from the area’s sky in the past days, monitoring, in specific, the lines of contact with the Assad’s forces.

In the past a few days, the Assad’s forces and the militias backing them have brought military reinforcements in the northern and western rural parts of Hama. Regime loyalist networks posted footage of the reinforcements, which basically stationed in the al-Ghab Plain and the regime’s military camps in northern rural Hama.

In a former interview with Enab Baladi, a commander of the Jaysh al-Izza/Army of Glory faction said that the reinforcements brought by the Syrian regime into Idlib’s surrounding hint at a military operation from its side.

Mahmoud al-Mahmoud, the commander of the Army of Glory, added that Assad’s forces have summoned a massive number of tanks into the area’s vicinity, in addition to several military columns, which indicates its initiation of launching a military operation in the upcoming days.

“The Russians, the regime and Iranians keep neither pledges nor agreements. Mistakes must be learned from, and the option of war must be prioritized over peace in the North,” the commander added.

Russia Hints at a Military Operation

To the day, the landmarks of Idlib governorate in the few coming days have not clarified, especially as the Russian threats of launching an attack continue, while the Turkish statements assure that the deal is yet ongoing without obstacles.

Vershinin added that all the de-escalation deals, agreed upon in 2017, are temporary procedures, pointing out that Idlib is the last area adhering to these deals.

“Idlib is an indispensable part of the Syrian state and the Syrian territories. Russia will not allow the presence of terrorist reserves, which must be annihilated,” the Russian official said.

Idlib’s destiny is linked to the outcomes of the Sochi summit to bring together the Turkish president Recep Tayyip Erdoğan, his Russian counterpart Vladimir Putin and the Iranian president Hassan Rouhani in mid-February.