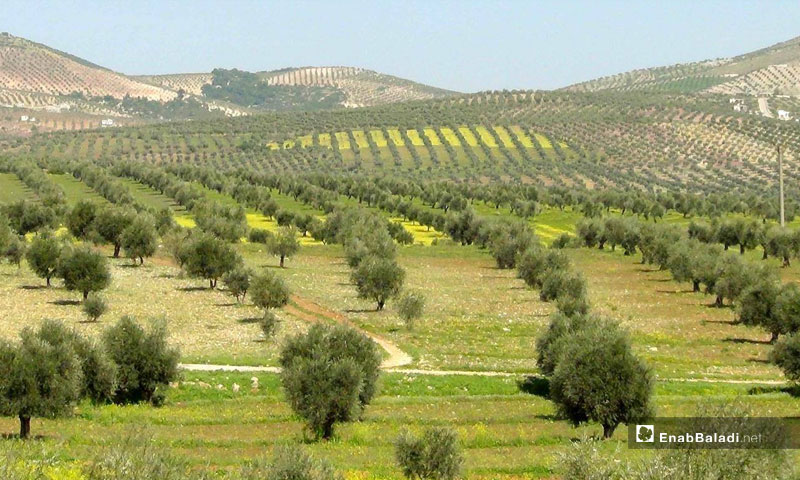 “The decision is unfair; fearful, we will give them what they want [. . .]. The people showed no objection,” this was said by one of the farmers at the Rajo district, north-western Afrin, northern rural Aleppo, commenting on the area’s local council’s decision, which defines the imposed percentage on the area farmers’ olive harvest.

The Rajo District Local Council has issued a generalization on October 15, providing for the taking 10% of the olive harvest of the farmers who registered their names and who are working in their lands by the oil pressers’ owners, while 20% is to be taken from the olive harvest of the absent farmers and those who assigned the harvesting process to their relatives by the Rajo District Local Council.

Crossed sources of the district’s framers told Enab Baladi that the decision resulted in negative effects, especially since that 10 to 20% is not a small one.

Enab Baladi attempted to contact several farmers. However, the majority refused to make any statement, fearing persecution by the factions.

Four farmers made statements, on the condition of anonymity, considering that the costs, the farmers are supposed to pay, are relatively high even if they were not forced to give a percentage of their heaviest to anyone.

The price of the empty olive oil can is 800 Syrian pounds, while the full cans are sold for 13/15 thousand pounds. In addition to the workers’ wages which reach a daily 2500 pounds. This comes at a time, where the harvest of the olive production demands a duration of a month to months and a half, which means that the money paid to workers is about 300 thousand Syrian pounds, in case only four workers were hired.

These payments do not cover the costs of fuel, tractors, and transporting the production to the pressers, for transporting a single sack bag of olive, the weight of which is 80/90 kilograms, to the presser costs the farmer a thousand pounds.

Royalties and Refused Powers of Attorney

The farmers estimated the royalties demanded to be paid for per olive tree with 500 Syrian pounds, in case the landlord is absent while has given a power of attorney to a relative as to run the land.

The sources said that “if the agent is an Arab, it is fine if he does not pay. However, the law is applied to Kurdish agents,” adding that despite this, the citizens abided by these rulings, to be surprised by ending the powers of attorney and eliminating them entirely according to an order by the head of the area’s local council.

The sources said that upon inquiring about the issue, the head of the council replayed saying: “These are orders.”

The area’s farmers demanded that this decision be issued in an official statement, but the head of the local council refused.

Enab Baladi tried to contact the head of the Rajo District Local Council, but there was not any reply.

The farmers mentioned that the area’s local councils refuse to sell the olive and the olive oil to entities outside the area, while the products are being sold to specific merchants only.

Afrin is one of the areas known for the quality of their agriculture, which is the main source of income to the majority of the population, as it ranks first among the professions performed by the people and contributes in the domestic production with a 70% of the area’s total revenues, according to former statistics issued by the Kurdish “Self-Management.”

The river Afrin is an important source of water in the region, with a length of about 149 km, in addition to the existence of a number of streams and springs.

The area is known for its fruit trees, quince, apples, apricots, walnuts, almonds, pistachio nuts and figs, as well as pomegranate trees, which occupy an advanced position in the production of Syria. Its area is about 18,000 dunums. In 2011, the number of its trees was about 720 thousand trees, producing about 14400 tons, according to what the assistance of the head of the “Afrin” Agricultural Department, Ahamd Abbas has told the “Aleppo” website in November 2011.

The olive trees cover most of the agricultural space. This agriculture ranked first in the region in terms of area and production, and it became a major source of income for the population. According to the “Self-management,” the number of olive trees is about 18 million trees and in the fruitful years the amount of produced olive oil is 270 thousand.

Afrin’s olive has a distinct position at the local markets and ones in neighboring countries.

In the area, there are 250 olive pressers, laurel soap factories and workshops, a conserves factory, a water bottling plant, three oil refineries and about 20 quarries.