Events Aiming at Raising Awareness about Mine Threat in Daraa 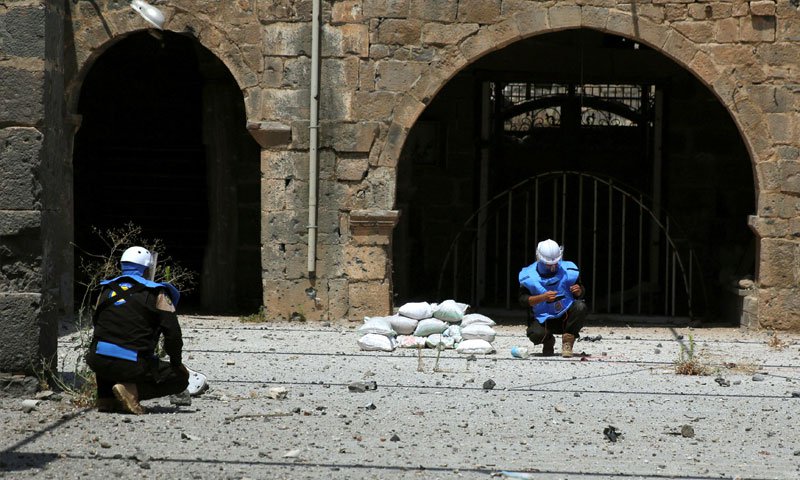 Civil Defense members getting ready to explode the remnants of cluster bombs in a safe manner – July 28. 2017 (Reuters) 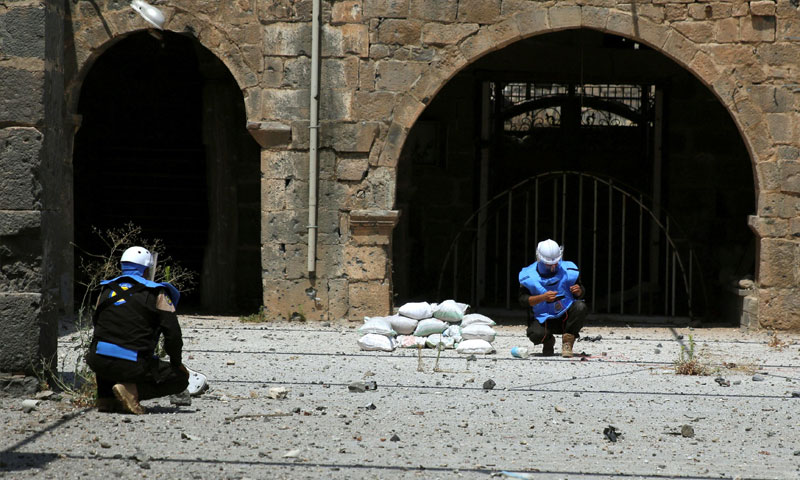 Different parts of Syrian, throughout April, have witnessed the organization of events that aim at raising the people’s awareness about mine threat and war remnants, after these explosive devices have caused the death of many civilians.

The Arab Mine Action Consultancy (AMAC) has organized an event with the same goal in the town of Muzayrib in Daraa, in the international day allocated to this cause, which correspond to April 4 every year.

The team is not local and has activities in Iraq and Jordan. However, due to being close to Daraa, it implemented a number of activities there, targeting children at schools in particular.

Since the beginning of the revolution, Daraa governorate has witnessed the death of 203 people due to mine explosions, both the ones resulting from the war remnant in the conflict areas and the ones intentionally planted by Assad’s forces, according to Mohammad al-Sharaa, a member of the “Martyrs Documentation” Office in Daraa.

The office has also documented 34 deaths as a result of the explosion of cluster bombs’ remnants, among whom there are 22 children. The large number of dying children relates to their misconduct upon finding cluster munition remnants, according to al-Sharaa.

The Documentation Office’s member stressed the important role of the initiatives and the training courses that target children, as to raise their awareness about the war remnants threat and help them avoid a catastrophic fate.

In Daraa, the mine threat inflates due to the agricultural nature of the governorate; their threat will persist for many upcoming years, for the dirt land is temporary hiding these explosive devices.

Mohammad al-Ghanem, one of the organized event’s participants and a farmer who lost his leg after a mine exploded his tractor, believes that all the events that seek to raise the people’s awareness about mine, explosive devises and cluster bombs’ remnants threats are crucial, especially those targeting children at schools.

Al-Ghanem thanked all the entities that are working to dismantle these remnants, such as the Civil Defense and others.

Al-Ghanem was working in a land in the al-Khaman area, where a mine exploded his tractor, leading to the mutilation of his left leg and multiple injuries in his right.

Al-Ghanem explained that he worked in this land for more than two years and has repeatedly ploughed it. After the explosion, specialists have told him that the landslides have helped bury the mine for a while, and due to constant ploughing, it rose to the surface of the land once more and exploded.

Different Syrian areas suffer the proliferation of mines, for the different conflicting parties have used them as a means to win the battle. They planted mines in roads, streets, houses and all that they managed to reach before the withdrew from the areas they controlled.

Raqqa is at the top of the Syrian areas that suffer this dilemma, especially since local and international entities have ignored the people’s demands to dismantle the mines and clear off the battles’ remnants, left by the “Islamic State” in the areas where it fought, turning demining into a trade at the hands of none-official entities, to which the civilians are paying their own money and lives.

Mines also proliferate in the Northern countryside of Aleppo, Afrin, some of Idlib’s rural parts, the Southern countryside of al-Hasakah, and Deir ez-Zor, which lies under the control of the Syrian regime and the “Syrian Democratic Forces” (SDF), where accurate accounts of the mines’ numbers do not exist as to facilitate the organizations’ action and response, due to the lack of coordination among the sides in control of the governorate.