Syrians Did Not Revolt to Kidnap Women and Children 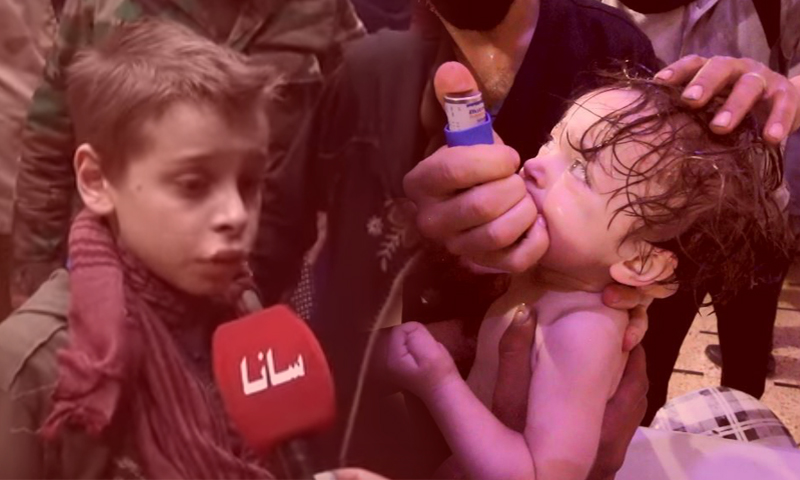 Horrifying photos have been released from Duma, in rural Damascus, of the victims of the chemical attack which Assad initiated on the evening of April 7, 2018. The attack killed 190 and affected hundreds, among whom there are many children and women. The photos ripped the Syrians’ hearts out and enticed their rightful anger towards the whole world and its inaction that in its intensity reached complicity. The world showed sympathy with the victims of the attack, while Iran, Russia and Assad’s regime have denied the committed act. Assad’s regime and its military forces might suffer rapid punitive blows for this crime and trials sometime in the future. 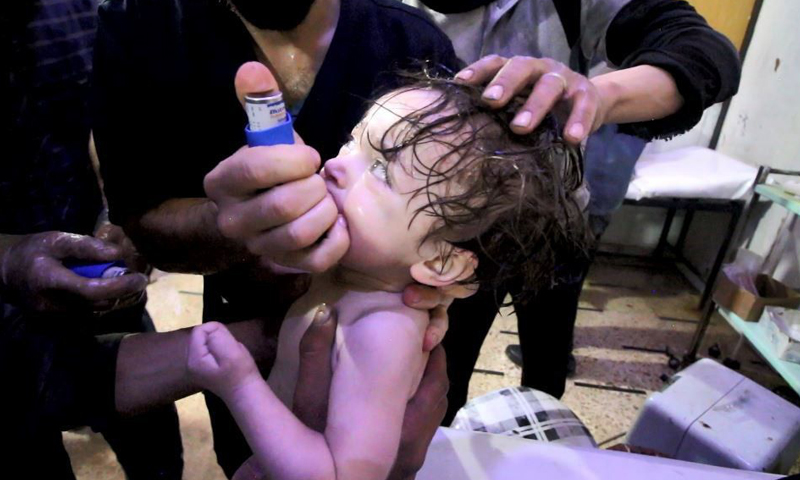 A first responder trying to save one of Assad’s chemical attack’s victims – April 7. 2018 (Duma Coordination)

What also caught my eye in the many photos taken from Duma, were the images of children, women and entire families, being kept as hostages in the custody of “Jaysh al-Islam,” one of the military groups that are fighting Assad’s regime, which Assad’s media and regime, the grand kidnappers, would exploit out of the context of criminalizing the act of keeping hostages, forcing it to the very edge, as to declare the “criminality of the Syrian revolution” and to prove that there was nothing such as a rightful revolution to demand freedom and dignity for all, but it was a movement by criminals and terrorists. 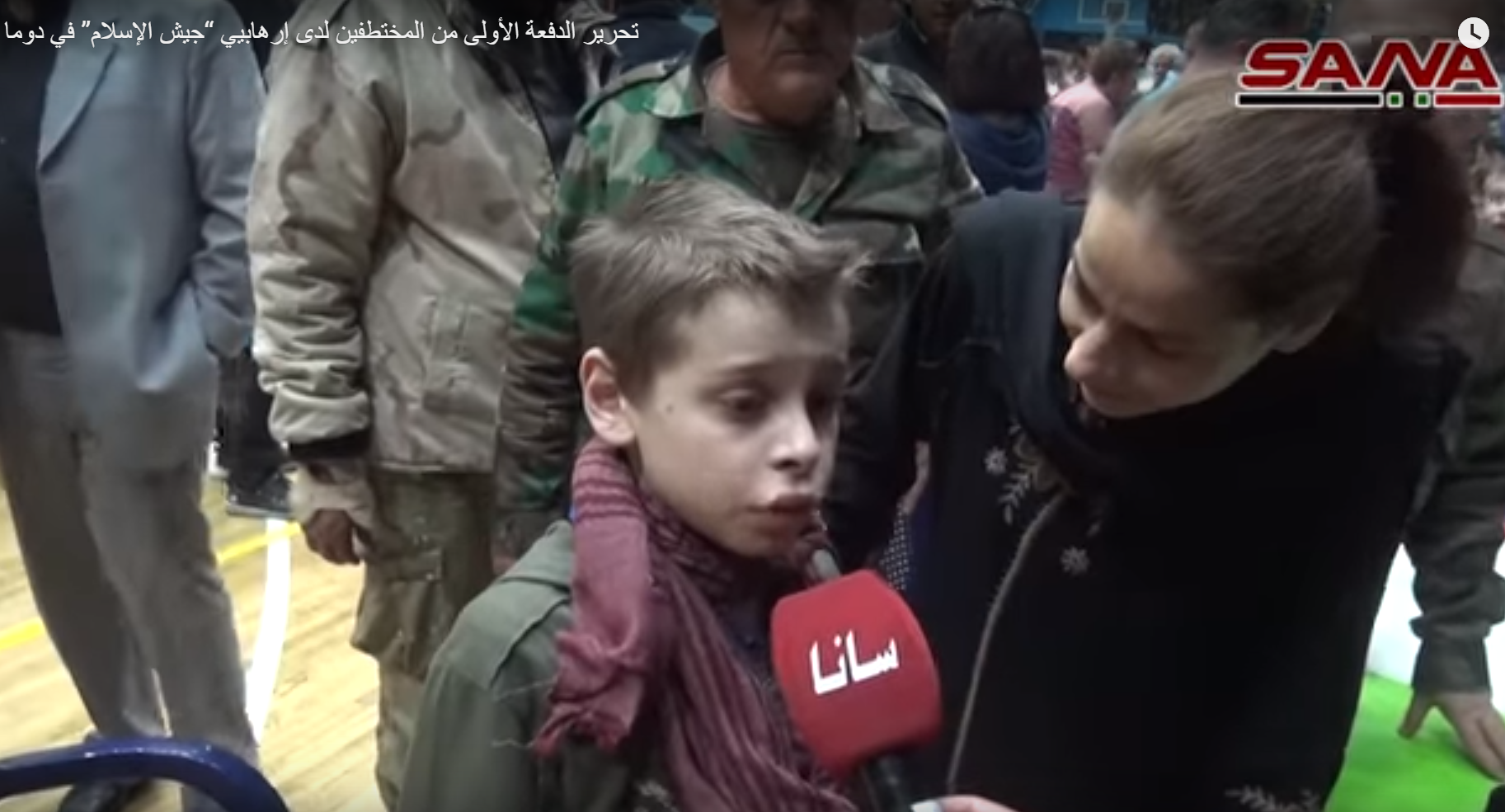 Kidnapping and taking hostages, definitely, do not belong to the Syrian revolution’s demands. And all those who practiced these violations and crimes have, primarily, abused the victims of these crimes, the Syrian people and their fair demands; they have also offered “significant” services to Assad’s regime propaganda, the essence of evil and the idol of criminals in Syria.

These criminals include al-Nusra Front and ISIS, which spared no foreigner or journalist, kidnapping them either to sell them to other terrorist bodies or to receive their price from European countries.  This stopped the western journalists from entering the Syrian areas liberated for Assad’s regime. Accordingly, it deprived Syrians from a western and independent media’s coverage of their pain and causes, a coverage that has a decisive role in the formation of the western public opinion in support of the Syrian people’s rightful cause.

A hostage is defined as a person, who gets imprisoned, threatened to be killed or to be sustained in a state of detention as to force another party to fulfill or prevent it from implementing a certain action as an explicit or implicit condition to set the hostage free.

The Assad regime utilized taking hostages as a systematic policy, for its intelligence services have practiced kidnapping citizens without a warrant issued by a judicial authority or even introducing themselves, to release them after receiving bribes. They have also detained the relatives of the people who they consider as wanted; mothers, sons, daughters, male and female siblings, with their babies who are yet being breastfed in many cases, to impose pressure on the “wanted” people to surrender themselves.

On the other side, “Jaysh al-Islam” committed this crime starting at the end of 2013, when it stormed Adra al-Umaleah and kidnapped women, children and civilians, harassing them by placing them in cages to be used as human shields and by other forms of violation.

Syrian’s consent and even their silence for such a crime, against the resemblance of which they have revolted, is a moral failure and nothing but a service for the violators, on top of whom is Assad’s regime. The leaders of “Jaysh al-Islam,” responsible for kidnapping these women and children, must be held accountable. International judicial suits must also be field against the countries that supported “Jaysh al-Islam” on the ground of funding taking hostages, among home there are children, women and entire families. The kidnapper, “Jaysh al-Islam,” is the entity responsible for the disappearance of the Syrian revolution’s and human rights’ icons, Razan Zaitouneh, Samira Khalil, Nazem Hamadi and Wael Hamade, who shared the fate of Duma’s people, the victims of Assad’s criminality, barrel bombs and chemical attacks.

Hostage-taking is a violation of the international humanitarian law, Geneva Conventions, the shared Article 3 and its additional protocols.

Even in the Sharia, which “Jaysh al-Islam” wears as a name, kidnapping innocent people is a “wrongful act,” a violation of the Sharia-based limits (hudûd) and the Quranic text since “[…]no bearer of burdens will bear the burden of another”.

From a moral perspective, there is no greater coward than that who assaults the weak, children and women, fully armed, it bullies the defenseless!

Some might allege that facing the devil and revolting against it might require becoming similarly a devil, but of what use would it be if you changed into that you have rebelled against!