Fatima, who Survived to Paint the Tale 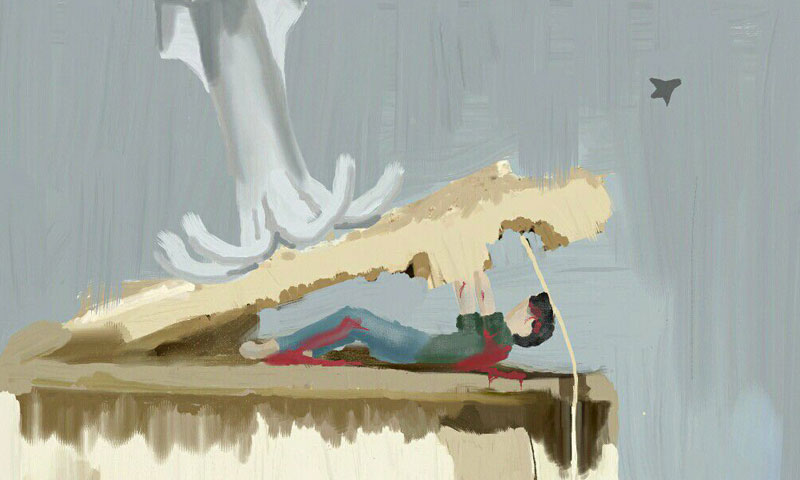 “If you are threatened by different parties, you will resort to the safest means, the less dangerous, to live and manifest your beliefs,” says Fatima al-Saraqibi, the young woman painter who lives in Idlib governorate.

“By choosing this road, you will face less, but you will gain more, and if you trust what you are doing, as well as receive enough support from the people around you, You will reach what you want.” With these words, Fatima abbreviates her method of mastering the crisis that the society is going through, only to serve it with the tool she owns- art.

Thinking Fatima’s words over, you come to find that she does not care to combat the checkpoints or cross the closed roads. For her, what matters, is how to make the already open roads more beautiful.

Fatima does not actually remember when she first started to paint; she believes that it dates back to the first time she held a pen, however, her passion for art goes back to playing with paste, which her father’s support rapidly transformed into a developable hobby, a thing that after all affected her education, for she chose to study architecture – a field that demands a massive skill of drawing.

In regions, described, today, as conservative, Fatima attained great support from her family and friends giving her “a buffer zone” to protect her while seeking to achieve her goal.

Thanks to this support, she has recently participated in an exhibition, which encouraged her to compete with male and female artists, whom she described as “professionals,” for they have published their drawings in magazines and have already participated in other exhibitions, while this showcase was her first step to exhibit her art in a public space, beyond the borders of her home.

“I, sometimes, receive messages telling me that painting is haram, [forbidden]. Nevertheless, they are written in a very diplomatic manner and with the intention to advice. No one has ever harmed me,” explains the young woman, who usually texts the sender a thankful message only to continue her work according to her beliefs.

These messages do not lead Fatima to the trap of contradictions, being a rural and veiled girl. Rather, she has always been in harmony with her beliefs.  “It might be that I have been drawing since childhood that I do not trace a contradiction with myself, which I believe in,” said Fatima.

Just the way she survived “social gossip,” which she considers as the most to harm a girl, whether an artist or not, Fatima has survived countless dates with death. A few meters away, a few minutes away. She has always been the girl, who death failed to kidnap.

Her family and friends’ support has played a role in her survival of the first crisis, the social one. As for the second survival from bombardment and explosions, a metaphysical force took the responsibility of protecting her. This created a chronical question in Fatima’s mind, a haunting question- “Why did we stay alive after all that we went through?”

“Life does not stop because death is around the corner at all times.” Fatima’s instinct responds to answer the persistent question: “The drawing is my voice. The drawing must speak what we are going through, and that voice must reach what lies outside Syria.”

That is why Fatima has survived, and that is why all who survived are alive, for every person has a role to play and a part, without which, the tale would not be complete.

In 2015, a barrel bomb fell in the house next to Fatima. Her neighbors, a wife and husband, who have been displaced for a year, died. Her parents were also displaced, while she stayed in Saraqib to continue her university education.

Every time she passed near her neighbors’ house, Fatima remembers what happened, until shelling on Aleppo began in 2016. The horrific published images of the civilians’ suffering there, including the picture of a girl, on top of whom the ceiling collapsed, releasing only a single arm and a single leg of her body. This photo was among the most outrageous images that inspired frustration and despair in the people of Idlib, together with Fatima.

“I will point my finger at the world and tell it that I am still alive under the rubbles of my house.” With these words, Fatima described the painting which represented the incident. Back then, she did not have the slightest clue about the prophecy which the drawing held for herself. In the same year, Fatima’s house was shelled; seven meters only separated her from the missile that fell at the edge of her house.

The young female painter, with the help of her family, managed to build her own private world within her home. When transportations, between the areas of Idlib itself,  were scarce and posed a danger, internet was the only transportation means that did not disappoint a girl like Fatima; it took her to far-reaching spaces of knowledge that gave her the ability to train herself depending on videos and images from “YouTube” and “Instagram,” of which she derived a “visual culture,” as she put it.

The Syrian society is not easy to understand, due to the “social variety” it contains. Fatima, for example, would not rule out the existence of people who like her drawings, but in which they observe a departure from “customs.”

The same applies to other areas in Idlib, Hama and rural Damascus, according to Enab Baladi’s communication with people there. They indicated that a singular opinion about art in society does not exist- There are people who totally refuse the idea for pure religious reasons and others who refuse it for security reasons.

Despite the difference in opinions, there are families who are doing their best to provide their children with the most secure conditions, girls in particular, through which they can do what they are capable of to serve society and to express themselves. This support, in itself, varies according to circumstances.

Behind the stereotypical image of a society shrouded in black, Fatima hides, and perhaps dozens, hundreds or thousands of girls, armed with talent and colors, who wait for the white page that time will open for them.