A women’s Team in Ghouta Fights Siege and Malnutrition

Citizens in eastern Ghouta standing in line in front of a bakery in the town of Hamuriya- October 21, 2017 (Ghouta Live) 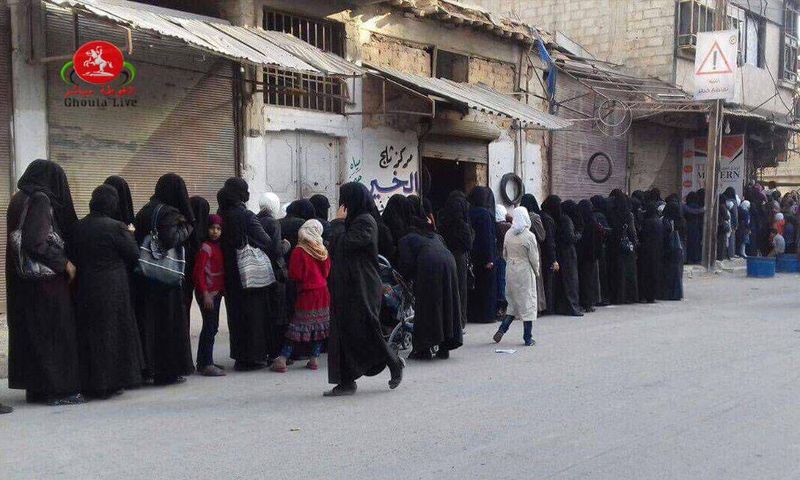 Four Syrian women initiated the idea of establishing a woman’s team in eastern Ghouta. It consists of widows who would provide services and relief aid to the besieged people of Ghouta.

The “Women of Ghouta’s Martyrs” is the name which triggered these four women in the besieged city of Saqba to support the people of Ghouta and provide them with food materials through periodic campaigns, the first of which began in early December, supplying children suffering from malnutrition with milk.

Enab Baladi interviewed Hind al-Ghourani, one of the team’s initiators, who said that the idea was based on the need for the Syrian woman to prove her eligibility in everyday life, especially under the crisis which the country is witnessing.

“The woman should support and help the people and the children of her country; she should also be strong despite all the circumstance and be a source succor for her orphan children,” she added.

For more than four years, Damascus’ eastern Ghouta has been suffering a suffocating siege, under which food and basic medical supplies went scarce, in addition to lacking primary medical care.

What worsened the situation in Ghouta was the prevalence of acute malnutrition among children which led to the death of many of them amidst international human rights pressures on the Syrian regime to evacuate the people who have medical cases that need urgent treatment, mostly children, women and elderly.

As a response to the children’s malnutrition, the four women, who are originally from the town of al-Malihah, launched the team’s first campaign, supported by a party which Hind chose not to mention. The women provided 77 children in Saqba with milk. The age of the children varied between a month and four years, and the weight of a single meal was 700 grams.

Hind said that the distribution process was not limited to the children of Saqba and al-Malihah only; milk would be given to all children who are in an urgent need for milk in the different towns of Ghouta.

According to Hind, the goal of establishing the team is to support and help the people in Ghouta overcome the siege through enhancing the role of women in that field.

“We seek to encourage all women to be effective in society, especially since we live in an environment that refuses to give women a role,” she said.

With the absence of breadwinners in the case of the wives who have lost their husbands in the Syrian war, Hind said that her team targeted widows because they must work. She added that “Life in Ghouta is quite difficult, especially with the siege going harder and the prices being on the rise all the time. The widow is in a dire need for a job that helps her stop her children’s hunger and be their father and source of support.”

The “Women of Ghouta’s Martyrs” does not have an office or an official location; they started working from Hind al-Ghourani’s house, which Ghouta’s people visit to get milk for their children.

Recently, the four women have been trying to launch a campaign to provide the people in Ghouta with bread and are planning to launch similar campaigns in the future.