Rural Homs: A Literary Seminar Aiming to Build an Intellectual Base 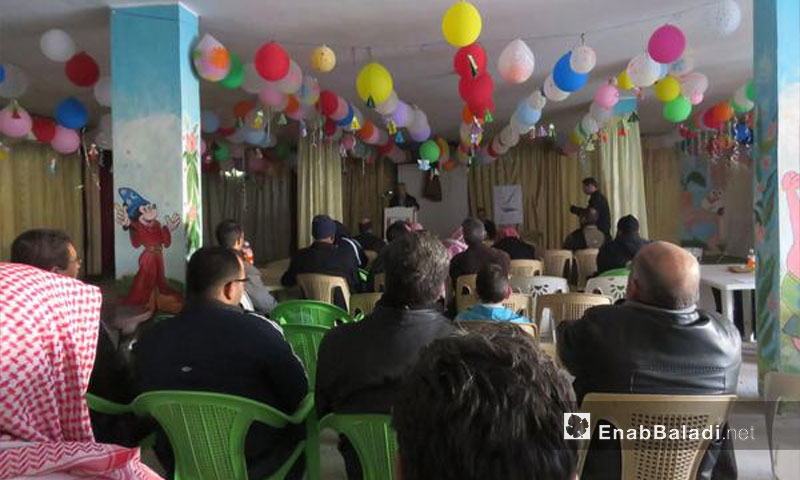 With words that reflect the reality in Northern Homs in particular and Syria in general, poets and literary figures wrote poems and speeches during a cultural and literary seminar, held in the “White Hands” hall in the vicinity of Talbiseh city in Homs’ northern countryside, on Friday, the 15th  of December, as one of a series of events organized in the region.

The Association of Central Area of the “Free” Syrian Writers Union, in cooperation with “Fayhaa al-Sham” Literary Club and the “Free” lawyers’ Syndicate, as well as Building Civil Society Movement have sponsored the seminar which has been organized as a form of interaction and to activate cultural events in the region, according to the Association’s Director Abdul Karim Jumaa.

The seminar’s events varied including, poetry and literature, which consisted of flirtatious and revolutionary poems. Some of these poems spoke of the nation’s reality and the conditions of the Arab World.

Jumaa told Enab Baladi that the seminar was organized to unify the efforts, concerned with culture, in the region. He pointed out that the seminar aims “to convey the message that the voice of truth cannot fade away,” to end the event with a confirmation that all the involved parties must keep on working.

Abdul Razzaq al-Ashqar attended the literary seminar, which he described as “collective,” and said that the audience listened to several teams, who are trying “to help individuals resort to the collective not individual thinking.”

He explained to Enab Baladi that the poems and speeches which have been given in the seminar “represented the people’s suffering. Some of these criticized the local society, such as religious committees and the like within a poetic form, so they would reach the people,” assuring that “there are certain abuses which have to reach justice”.

The poet Uday Ezzeddine from al-Rastan, who participated in the seminar, said that the event contributed to linking ideas through the contributions of poets and writers.

In his interview with Enab Baladi, Ezzedine said that the evening “is a part of the framework of building a basis for intellectual work in the absence of academicians and thinkers in the region.”

With the break out of the revolution in 2011 “al-Fayhaa” Club organized the first seminar to unify cultural efforts in Homs’ northern countryside. The establishment of Syrian Writers Union Association followed this and the events continued until the day.