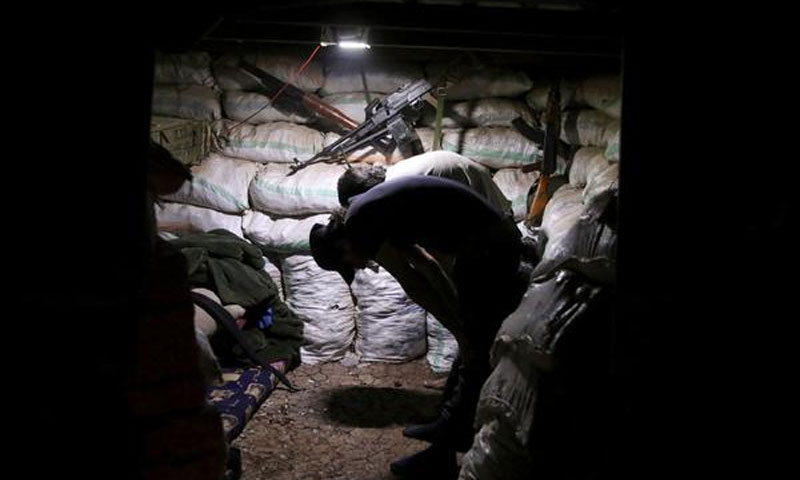 The “de-escalation agreement” signed in southern Syria did not succeed in curtailing the military operations of Assad’s forces in the region. Moreover, it made a cover for the on-ground political equations and a new phase through which the Syrian regime tries to retrieve strategic areas held by the opposition factions, to be a winning card in the futuristic rounds.

Apparently, the battles in Beit Jinn in Damascus’ south-west countryside are the beginning of a series that Assad’s forces are trying to apply by first controlling the areas held by the opposition factions in the south of Damascus. However, to do this the forces will have to reopen the military fronts in the death triangle to reach the depths of the opposition-held areas in Daraa’s western countryside.

The military crowds and reinforcement which Assad’s forces and ally militias have summoned, in the past few days, to different areas in Daraa’s countryside, confirm that the south is about to enter a new military phase, which resembles the one in 2015, the year that witnessed military action which could be described as the largest of its kind in the region since 2011.

The latest reconciliations conducted by the Syrian regime in the south-west of Damascus, including Khan Alsheh, Kanaker and Al-Kiswah, are considered one of the steps that can guarantee an external belt around Damascus, in case the regime chose to start military operations.

The battles in Beit Jinn, to the west of Damascus, cannot be separated from the other regions related to it in Daraa and Quneitra. Whether the battle is lost or won, it would draw a new military map for the regime and ally militias or the opposition factions.

Assad’s forces battles in Beit Jinn persist on different axes: on the northern part, which is the dividing line with Beit Saber and Kafr Hawr or the southern part, the eastern entrance of Beit Jinn, which the regime announced controlling the last week.

According to the field map of control, the regime is trying to achieve a settlement in Beit Saber, Beit Tema and Kafr Hawr. In case it succeeded in controlling Mughr Al-meer, the regime’s chances of achieving the settlement would increase after isolating this part, which is about 21 square kilometres, from the complex of Beit Jinn.

As for the military factions, the battles will go on until the military operations there end despite the massive pressure and the “laziness” to break the siege over the region, according to what leaders, in the region, have said, for the battle is crucial, and losing it would only mean losing the last of the strongholds in western Ghouta.

In an interview with Enab Baladi,  Abdullah al-Assaad, a colonel and military analyst, considered that the current developments are done to separate the south of Daraa from Quneitra after the battle of Beit Jinn, for the regime is following a chronological plan, according to which is taking serial steps throughout the Syrian geography.

It sounds that what is hindering some of the regime’s movements in Daraa is the battles it started in Hamas’ eastern and northern countryside reaching Idlib’s southern countryside.

According to al-Assaad, Iran is seeking to have more winning cards than Russia has in the south, despite the fact that the latter has a base in the town of Muthabin, close to Al-Sanamayn city, and detection points in Jordan.

The progress of the military operations conducted by the Syrian regime to control the region indicates that they would last for more than four months, a duration that is enough to prepare the situation to open the battles of the Death Triangle before finalizing the battle of Beit Jinn.

Facing reality, the battles in Mount Hermon would be very slow taking into consideration the climate. This would trigger Assad’s forces to open the axis of the three countryside in a reserve military operation before Beit Jinn.

A map showing the military control in Southern Syria (Livemap)

The “Triangle of Death” is the point of confluence between the countryside of Draa, Quneitra and Damascus. This geographical point of convergence, in 2015, witnessed battles which ended up with Assad’s forces and Lebanese, Iranian and Afghani militias controlling it in March.

Talks about recreating the circumstances of the Death Triangle did not come unexpectedly, for the military movements are done by Assad’s forces and the Iranian militias have played the most important role. Statements by Iranian media outlets confirmed this and defined the axes which Iran and the Syrian regime intend to enter through.

According to a report published by the Iranian “Fares” News Agency, in early December, “Large” reinforcements have reached northern Daraa and Quneitra.

The Agency said that the regime is preparing northern Daraa, Zimrin town in eastern Enkhel in particular, which is considered a demarcation between the opposition and Assad’s forces. The attack will reach al-Samadaneya and al-Hamdaneya in Quneitra, pointing out that the “Death Triangle” will soon witness battles.

“Abu Huthaifah al-Shami,” the Military leader in “Hay’at Tahrir al-Sham,” told Enab Baladi that the military factions monitored reinforcement on the part of “Hezbollah” militia on the axes of the Death Triangle, the area of Tulul Fatima and the city of Khan Arnabah. It is expected that Assad’s forces would launch a military campaign in the region; however, neither the timing nor the timing is known.

The Syrian revolution’s factions consider the region a red line, according to al-Shami who explained that the regime’s recovery of the region, especially Tal al-Harrah, means the collapse of al-Jaidur region and going back to the first years of the revolution in which the regime was able to bomb any area with artillery.

The hordes of Assad’s forces are not limited to the mentioned regions, for they have also reached Al-Sanamayn, Izra, Khirbet Ghazaleh, Naamer and Qerfeh, which are considered a frontline with the city of Daraa.

There is a group of weak towns which can be used by Assad’s forces to penetrate the region. However, upon reaching the surrounding of al-Harra city, the “major” confrontations and real battles would begin.

The importance of Tal al-Harra lies in its being the highest hill in southern Syria overlooking the southern and western parts of Damascus’ countryside and the northern parts of rural Daraa and Quneitra.

According to the Colonel al-Assaad, the Death Triangle is a dangerous region, taking into consideration the incidents it witnessed in 2015 when the military factions reached it and became less than 10 kilometres close to the city of Darayya.

He explained that Iran has its own share of the current military progress, whether through leading the operations in the region or the steps it has lately followed by recruiting hundreds of the region’s young people in teams affiliated to it.

In a statement, these factions announced that the formation came “to close ranks and prepare for the upcoming battle.”

Iran’s Eye is on the Jordanian Borders

On the part of the Syrian regime, political talks are not separated from military ones, especially in the latter two agreements in Daraa and Idlib governorates, for the relation is mutual in one way or another.

The situation is totally different when it comes to the Syrian opposition for it failed to own any cards of military pressure to be used in political talks and the negotiators alienated themselves from the things going on the ground.

In correspondence with the progress witnessed by the Badia Region in the last a few months and the withdrawal of the opposition fighters from it, Iran as a party entered as a massive power in the southern part of Syria and as a new partner ignoring the agreements of other countries (Russia, USA, Jordan, Israel).

Tehran’s movements show that it intends to reach one of the two following fronts: The borders of Golan or the borders of Jordan.

According to al-Assaad, Iran does not aim to reach the Israeli borders with Golan; but rather, it seeks to reach the Jordanian borders. For the time being, it concentrates on As-Suwayda’s eastern countryside, which it has lately managed to control.

The reasons why Iran cannot reach the Israeli borders, according to al-Assaad, is that the latter would not allow for such a progress and its latest raids and attacks on Iran’s sites in Syria confirms this.

The influential countries in southern Syria consider that Iranian militias reaching the Syrian-Jordanian borders and the borders with occupied Golan would be a “regional red line,” that demanded immediate interventions which failed to curb the expansion attempts due to the Iranian maneuvers in the last a few months.