The Scenarios behind Iranian-Israeli Confrontations in Syria 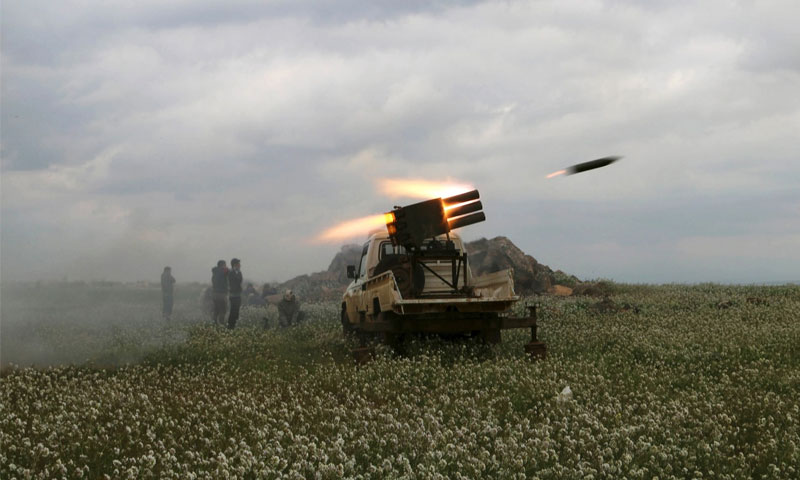 The tune of the statements exchanged by Iran and Israel went sharper, following the aerial confrontations that resulted in the downing of an Iranian reconnaissance aircraft and an Israeli military aircraft, on 10 February.

While the Israeli side keeps repeating that it will not accept Iran’s expansion of its hegemony in Southern Syria, the Iranian aspirations are only inflating, especially that Iran succeeded in empowering its presence in Homs, Hama, Deir ez-Zor and rural Damascus and almost reached the ceasefire line in Quneitra governorate.

The unprecedented escalation promises of a military confrontation between the two sides, for which the two governorates of Daraa and Quneitra would form a stage, the shrapnel of which would affect the international allies of the two sides.

Field reports from the northern sections of rural Daraa and Quneitra have warned of the Iran backed Assad’s forces preparations to start a battle at three axes aiming to progress to the village of Jubata al-Khashab in the governorate of Quneitra, the Death Triangle and Tall al Ḩārrah in Daraa governorate, which mean the (re)imposition of weapons hegemony on large spaces near the ceasefire line in the occupied Golan, which Israel fears and promises to intervene to prevent, placing the area in front of a number of potential scenarios, whether to avoid this confrontation or the finish line that it would reach.

The potential confrontation between two countries, labeled as among the strongest in the Middle East, will take place on the land of a third country, which territory has turned into an open field for military interventions. Lawyer Mohammad al-Jahmani, an informed human rights activist based in Daraa, believes that this confrontation will be another circle of international laws’ violations in Syria since the break out of the Syrian revolution, for both countries (Iran and Israel) are conducting a war on the land of a third country, whose government has killed and injured hundreds of thousands of its people and opened the door for dozens of countries and armed militias to fight on its soil.

The lawyer, who has been following up the developments in rural Daraa and Quneitra, as well as the western countryside of Damascus before them, said that the area is in front of four scenarios, the most plausible, according to him, is a repetition of what happened in Beit Jinn, through signing a “reconciliation” agreement between Assad’s forces and the opposition factions, with keeping the fighters under these factions in the area, as a guarantee to prevent Iran and  “Hezbollah” from approaching the borders with the occupied Golan.

Israel might not refuse that scenario, for it already has relations with some of the factions in Southern Syria.

Al-Jahmani pointed out that the application of the mentioned scenario would be difficult due to the discrepancy between Beit Jinn’s former condition and the current condition of the southern area in terms of the siege, the weakness of the opposition factions and the geographical area they are controlling.

The second scenario is represented by reactivating the “de-escalation” area in southern Syria and spreading monitoring points, in a manner similar to what Turkey is doing in Idlib.

According to the lawyer’s perspective, this option would address Israel’s demands and form an end to the Iranian ambitions; however, realizing it is doubtable due to the lacking locally and regionally accepted third side that would be able to administrate the monitoring points.

Jordan might be the major candidate for this mission, despite its great efforts to stay out of the circle of the Syrian war. Nevertheless, its fear of the Iranian expansion might trigger it to enter Syria as an observer of the “de-escalation” area.

A Confrontation or Surrendering with Guarantees

In addition to the above-mentioned scenarios, a third proposes itself in front of Southern Syria, manifested through Assad’s forces success in entering the area and coloring its map with red, with the Russians’ participation in controlling the crucial strongholds, such as the strategic hills.

Lawyer al-Hajmani believes that Russia will play the role of the alternative and the guarantor to prevent Iran from enhancing its hegemony in the area, a step that would be followed by returning UN’s Peacekeeping Forces to the border line, which answer both Israel and Russia’s demands.

It also addresses the Iranian demands of reestablishing Assad’s forces authority in the area, but the problem in imposing such a solution lies in the necessity for the opposition’s, both popular and military, retreat, which means that Assad’s forces will be having complete control over the area.

The fourth scenario, the worst, is a massive confrontation between the Russia and Iran backed Assad’s forces and the opposition factions, some of which are receiving an Israeli funding.

The lawyer pointed out that this confrontation might witness a direct Israeli participation, via intermittent air raids, similar to Israel’s style in the former years, or an indirect participation through providing the opposition with particular types of weapons and waiting for its help’s results.

The battle would be accompanied by regional political pressure that will affect its stream, ending either with the ability of one of the sides to end the military confrontation and wining or with a pacification, then returning to one of the previously mentioned scenarios.

Since the break out of the Syrian revolution, early 2011, the Syrian stage has witnessed regional and international, direct and in direct, interventions, the most prominent of which was the open funding that the United States of America has offered to the “Syrian Democratic Forces,” the Russian intervention to support Assad’s forces, and the Turkish intervention in favor of the opposition factions in Northern Syria.

Despite the absence of direct interventions in Southern Syria, the Israeli-Iranian conflict to prove their hegemony promises of an anticipated war between the two sides, in which the least heard words would belong to Assad’s forces and the opposition factions both.