Markets for Relief Items in Idlib… Organizations Are Purchasing 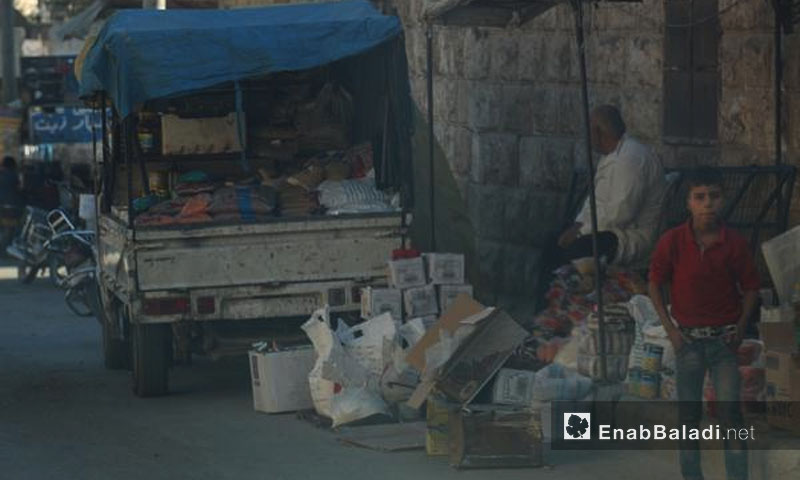 In Idlib’s market, relief baskets have turned into a new form of trade. Strange enough, a person can find shops specialized in selling food aid cans only and others which sell different types of relief items. Some stores provide the people with the possibility of buying a complete food aid basket that is still packaged. Thereby, it is only natural to come across food baskets, which the “Big Heart Foundation,” “Violet Organization” and others distribute as aid provisions; stores sell complete baskets at varying prices.

About the ways through which these spreading materials reach the market and the stores’ means of getting them, Obeida Kraij, the owner of a shop that sells relief items in Idlib, said: “Consumers themselves are the main source for these materials; we buy them at retail, each item separately.” He denied buying them at wholesale from a particular place.

Kraij confirmed to Enab Baladi that citizens trade off some of the materials in the food basket, things they do not need, such as pasta bags, for materials that they need after agreeing on a certain price. The agreement is preceded by the shop owners attempt to get the goods for the least possible price; citizens do not really bargain for they had the material for free, and it would not be such a big problem to sell them for a price that is a lot less than their actual one.

Malik al-Zir, the Managing Director of Violet organization, confirmed to Enab Baladi that the food basket contains materials that would take more than a month for the family to consume and other materials which recipients do not like. Therefore, they tend to sell or trade them off for other goods. In addition to this, some recipients receive relief aid from other involved bodies, which might be active outside the city and have materials which go over their need, so they sell the surplus.

Al-Zir said: “We always re-evaluate the recipients; we deprive some and add new ones. However, the phenomenon persists.” He assured that he is always trying to solve the problem through cooperating with other organizations.

He considered that due to the lack of inter-organizational coordination, some citizens have received relief aid twice: “displaced people move from one city to another, while their names remain in the [aid] register in the former residence; they also register in the new place, a thing which helps them get aid from the two places.”

A Food Basket is More Expensive than Retail Items

The prices vary according to the availability of materials and distribution by organizations, according to Mounir Hajj Saad, the owner of a wagon through which he sells food aid cans in the city of Idlib. He pointed out that there are no fixed prices and these materials are like the “stock market;” their prices keep swinging according to availability.

He said that when the organizations distribute large amounts of relief baskets to the displaced people, the market becomes abundant with food materials, especially at the beginning of the month. Accordingly, complete baskets are sold instead of separate items. The price of a single basket might reach 6000 Syrian pounds while the materials inside it are sold for twice the price in regular stores. The basket’s price might reach 10,000 if there was a lack of distribution. No matter how much the price rises, it does not reach the price of the materials that are not aid related, which are sold in the market.

Bartering is a Fundamental Principle

In addition to selling food aid materials, bartering between sellers and purchasers began to spread. Citizens who have plenty of relief items trade them for other materials, according to Saad, who confirmed that the sellers’ benefit margin is created by securing alternatives for the customers, for example, they swap two cans of beans with a packet of Mortadella.

He considered that this work’s main principle is bartering, pointing out that all the materials that a citizen might like to barter for are available. If they have a surplus of flour sacks and wanted to barter them in exchange for olive oil or rice, that is fine.

Khalil Abdul Jalil, a displaced man from the city of Homs, said that bartering was normal, as all citizens were exchanging materials that they did not need.

Bartering and selling are considered natural, however, the surprise lies in the idea that humanitarian organizations are also purchasing these materials; they repackage them and offer them to citizens, according to Manar al-Abaisi, who specializes in selling food supplies such as, flour, rice and bulgur.

Al-Abaisi said that not only people buy these products; some organizations purchase large amounts from his store. The materials are then packed in sacks and filled into baskets. After that, the baskets are redistributed to displaced people because the price of relief items is less than the free price.