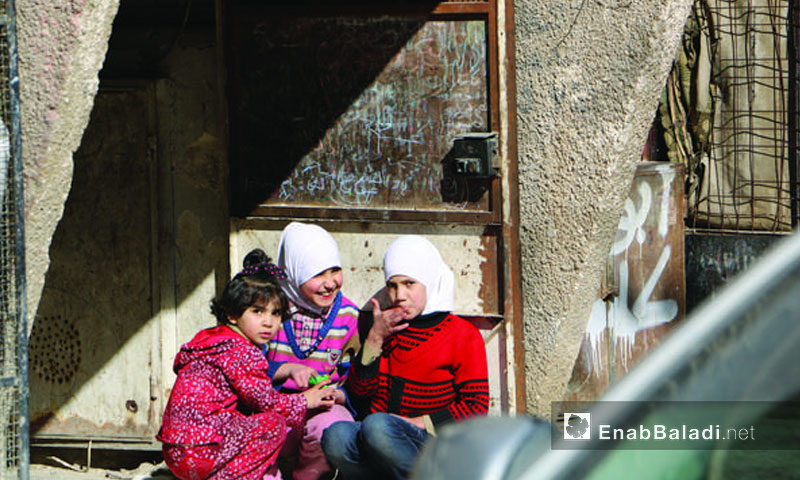 Malek al-Hrek, a 23 years old activist, carried his camera, every single day, throughout the region as a member of “Ghouta Media Center,” which became active a few months ago showing the images of the cities and towns of eastern Ghouta and turning to a trusted medium by many of the region’s people.

Malek tells Enab Baladi that he heads to the coverage area “to transfer the incident or participate in helping some people before the arrival of the Civil Defence.” He describes himself as a citizen journalist, who found himself revolting against the regime by being a journalist after he used to work in the field of printing prior to the revolution.

The activist and his colleagues went through a number of journalistic training courses with local and international agencies, according to what he said. He assures that “he developed  by correcting the mistakes that were common at the beginning of his work,” and points out that “the largest segment of activists did not basically study journalism, but they were able to gain skills and expertise in the past a few years.”

The Center was launched four months ago with the help of 13 volunteer activists. It faced a dense criticism until the number of its staff reached 50 reporters and administrative figures. Its members believe that “voluntary Centers are trusted better than the sponsored bodies.”

Journalism in Ghouta was limited to field reporters, who form the source for news there, and the bodies which worked in the field of journalism were many and various.  Some of these bodies failed and others continued working to this day for the situation there is complicated at different levels, especially the military, civil and humanitarian ones.

Abdul Moneim Isa, the director of the Center, said that it focuses, first of all, on the documentation of the regime’s violations and the massacres it committed against civilians, as well as showing the images of the daily life of Ghouta’s people, news and the activities of the revolutionary bodies there.

The Center depends on the efforts of the volunteers, who utilize their own equipment without a specific financial compensation, according to the director who assures that the work is going on  “with objectivity and professionalism in a manner that serves the revolution and is seeking to reach a free platform, as well as a trusted source on which all media outlets can depend.”

Moaz Kharbutli, a member of the Center, in his interview with Enab Baladi, says that the Center is independent and seeks to give Ghouta a voice without being a beneficial body. He also says that to revive something that resembles what the “coordinators in the beginning of the revolution used to do” is important so that the Center becomes a source for news.

The Center includes a staff consisting of the best activists in rural Damascus; it is distinct for being fast and trustworthy in terms of details, according to “Orient’s” reporter in Ghouta, Hadi al-Munajed.

Hadi tells Enab Baladi that the bodies concerned with the new Syrian media, know that it has become superior to the Syrian regime-based media in terms of achieving goals relating to news, entertainment and gaining credibility and trustworthiness on the part of the audience and international media outlets.

According to the journalist, the reason behind the success of the new media, including “Ghouta Media Center,” is that “they form a public media, which is a the most crucial guarantee  for its survival beacuse those who are involved in it do not have a political agenda, though they are all against the Syrian regime, and work without conditions or restrictions.”

Malek remembers one of the hideous incidents during his work as an activist. In 2013, when the military planes first took control of Ghouta’s sky, he reached the location where a rocket hit a building in which 40 people were hiding. “The rubble buried them all. I went back, amidst the dust, holding on to my camera and in a total disbelieve,” he said.

Many difficulties faced the media in Ghouta previously, on top of which was militarization, which became the profession of a number of media and non-media personalities according to their orientations and support to a certain military faction or body a thing that challenged independence, a trait that “Ghouta Media Center” seeks to keep throughout its journey.