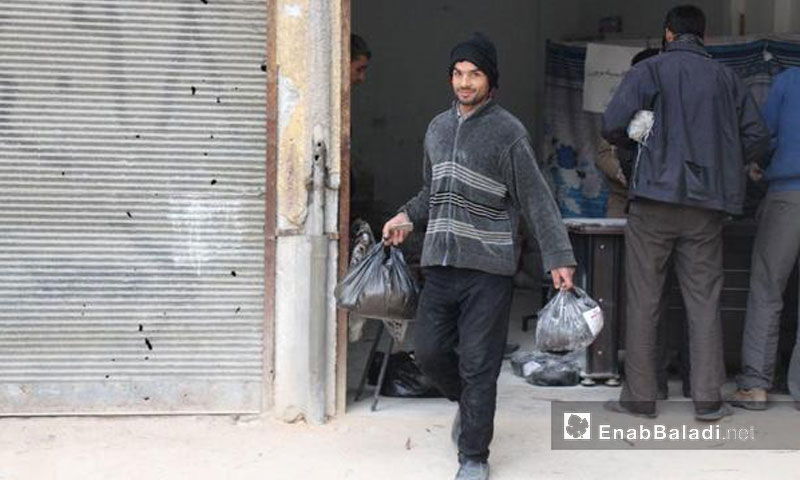 An economic game controls Damascus’ besieged eastern Ghouta. With food materials and goods entering the area, through Al-Wafideen Crossing, in an unstable manner, the equations of the game started to be more clear, as well as the gains which the merchants and the Syrian regime are accumulating at the expense of citizens, who lost the ability to purchase.

Financial gains are not limited to merchants for the Syrian regime also managed to get sufficient amounts of money, the last of which was 20 million USD in return for the royalties it imposed on shipping cargos under a bargain with a merchant called Mohieddin al-lManfoosh.

With the admission of food convoys to Ghouta, the prices of food materials are still “fictitious” if compared to per capita income, which has been decreasing due to a marked rise in the levels of unemployment and the absence of crafts and professions, which used to be the people’s main source of income before 2011.

A Reverse Equation..”Merchants Are Buying”

After al-Manfoosh’s convoy entered Ghouta, at the end of November, the prices of sugar, margarine, and vegan oil decreased, after the price of one kilogram of sugar was about 15,500 Syrian pounds it became about three thousand pounds.

The bargain with the Syrian regime included the admission of five thousand tons of food materials at a rate of 160 tons per day.

According to Abu Mahmoud al-Shami, the director of public relations at the Department of Commerce and Economics in Ghouta, only a slight amount of the materials carried by the convoys reached the consumers. He explained that the only people who are purchasing the materials are wholesalers and retailers, who are trying to provide the commodities their stores lack.

In an interview with Enab Baladi, al-Shami said that these conditions result from the weakness of the customers’ purchasing ability and the deterioration of the living conditions of people in Ghouta, as well as the rise in the levels of unemployment, reaching 80%, in the past five months and classifying 90% of the people as below poverty line.

The admission of food materials to the cities of besieged Ghouta follows a specific mechanism, which details became clear with the last cargo. Basically, the cargo was beneficial only for the area’s merchants for people lack the ability to purchase. This situation triggered the merchants to buy all the goods to resale them, in the coming days, for prices that are double of their prices during the few days that followed their admission.

The admission of food commodities under such prices cannot be viewed as an attempt to break the siege, according to al-Shami, who attributed the situation to the high royalties imposed on the commodities and the resultant “commodities exchange market” for each type of food.

Leading institutions in Ghouta sought to specify the prices. However, their efforts were useless due to the merchants’ monopoly of the goods and the effect of the Syrian regime’s conditions on the admission process, as well as limiting the trade movement to the al-Wafideen crossing and the regime’s refusal to open any other crossings at Jisreen and Arbin after the negotiations done by Syrian opposition.

In conjunction with the deteriorating conditions in which civilians are going through, many questions have been raised about the sources of income they rely on to meet their daily needs.

Abdul Rahman Salha, a member of the economic bureau in the city of Duma, considered that the per capita income in eastern Ghouta is limited to a few sources. To Enab Baladi, he explained that most of the young people there depend on financial grants, and others are employees in the institutions. There are also those who depend on daily work such as, benzene, vegetable, bread and cigarettes’ selling stands.

As for families, many of them have lost their breadwinners, such as fathers, and the relief provisions they get from organizations are considered the main source of their income, in addition to the guarantees which organizations offer to orphans.

According to Salha, another portion of civilians depend on simple professions, such as (Carpentry, blacksmithing, selling of fuel), in addition to works related to the medical and educational fields.

Others depend on financial support sent from abroad. However, this process clashes with the exchange companies for they cut about 17% of the money as a charge.

The above-mentioned categories constitute less than 30% of the population of eastern Ghouta. As for the remaining 70%, it is suffering tragic situation and extreme poverty according to the member of the Economic Bureau.

A Syrian family, which consists of five members, needs a thousand pound to buy four loaves of bread, which weight does not exceed 900 grams. They get that bread from the bakeries belonging to the merchant al-Manfoosh, who distributes bread to the cities of Ghouta according to the density of the population of each area.

Despite the fact that the region has been included in the “de-escalation agreement” under a Russian-Turkish- Iranian guarantee, which included breaking the siege over Ghouta and allowing the admission of basic commodities without obstacles, royalties or taxes, the region is suffocated by a siege that is getting tougher and daily shelling by dozens of air strikes and mortar shells.

The “Opposition Factions” Are Interfering

In the context of Ghouta’s economic situation, the factions, who are active in the region, cannot be overlooked. The factions are playing an important role in planning and specifying the commercial mechanism, let it be through the agreements and bargains including the regime and the merchants or the merchants affiliated to the factions who protect them.

Ismail Yassin, a member of the Damascus Provincial Governorate Council, talked about the two sectors (the Duma sector and the central sector) in Ghouta and the ways the factions deal with civilians, describing them as “varied.”

He told Enab Baladi, that “Jaysh al-Islam” interferes, largely, with the work of relief and humanitarian establishments functioning in its sector. However, “al-Rahman Legion” intervenes but only sometimes.

With closing the tunnels after Barzeh and Qaboun neighborhoods were controlled, the crossings were cut off from the central sector and the commercial operation stopped completely. Nonetheless, in the city of Douma, al-Wafideen crossing is still open to trade.

The “dates’ exhibition” which took place in the regions under “Jaysh al-Islam,” last week, shows the economic gap between the cities and towns of eastern Ghouta. The cities in the central sector of Douma are living a tragedy due to the absent commercial interaction with the Syrian regime’s regions, interactions limited to the regions under “Jaysh al-Islam.”

Merchant Moataz Abu El-Ezz talked about the details of the goods entering Ghouta, explaining to Enab Baladi that the merchant in Ghouta buys commodities through his agents in Damascus, to be transferred later from Damascus to al-Manfoosh’s cargo center in Maarba, in the countryside of Damascus.

In the next stage, Al-Manfoosh Company admits these materials into Ghouta. The financial cost is specified according to the type of the commodity and its weight, for example, clothes’ cost is 3300 pounds per kilo, shoes 3300, biscuits 3500, snacks and nuts 3700, detergents and tools 3800.

“Abu El-Ezz”  pointed out that the cargo charges are paid when the commodities are admitted to Ghouta after passing al-Wafideen crossing and said that the price of nuts and snacks is four times higher than their prices in Damascus, clothes’ prices are three times higher. However, the price of food commodities is 8 times higher because they are largely demanded in comparison with other commodities.

The member of the Economic Bureau gave a clearer mechanism. The first step is that delegates receive the goods from l-Manfoosh warehouse and then sell them to the wholesalers. The wholesaler then sells them to the merchants, who sell commodities for a price that is two times of the wholesale price, the groceries and the stalls. He explained that during each of these stages, the price of the commodity, already so expensive, goes higher due to the added percentage of benefit.