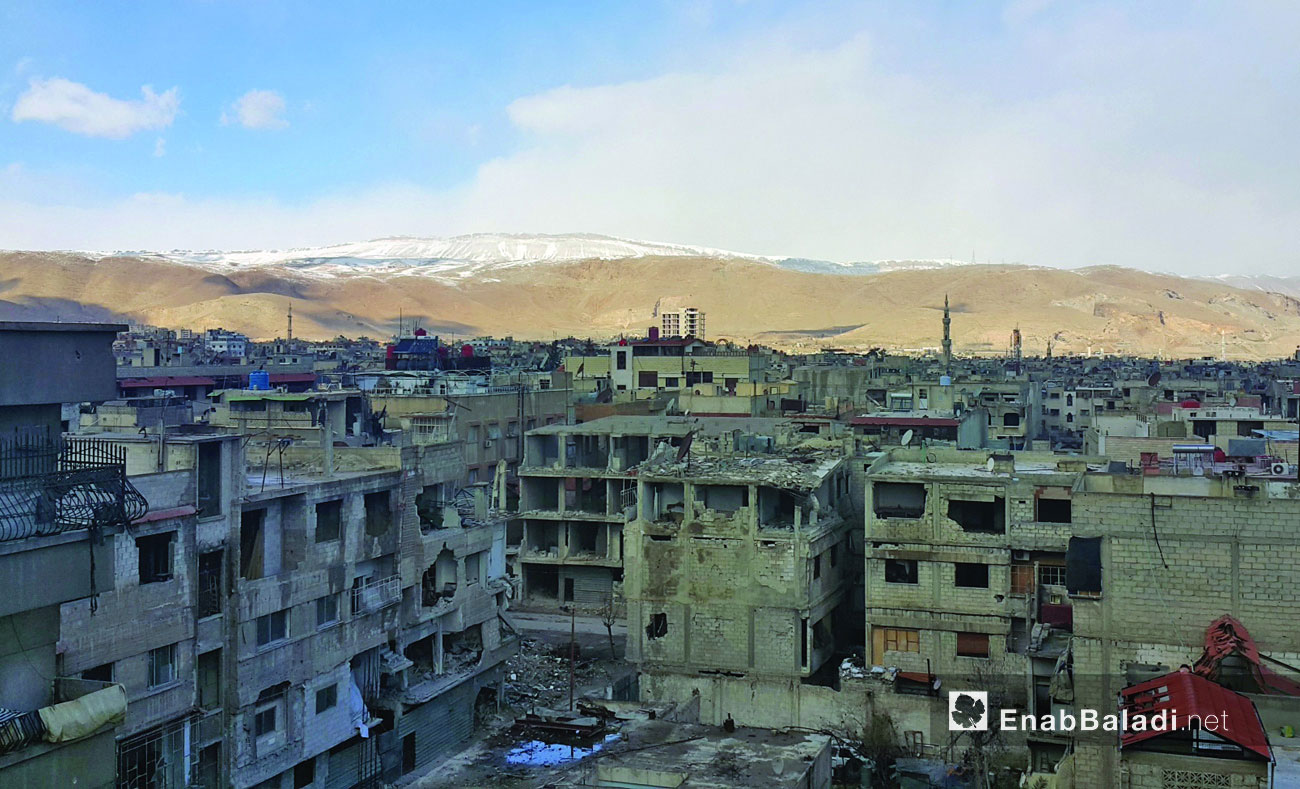 Amid intensified efforts to clear Damascus and its surroundings of rebel forces following the fall of Aleppo, Enab Baladi lists the areas in which the opposition continues to hold off inside the capital region

Amid intensified efforts to clear Damascus and its surroundings of rebel forces following the fall of Aleppo, Enab Baladi lists the areas in which the opposition continues to hold off inside the capital region 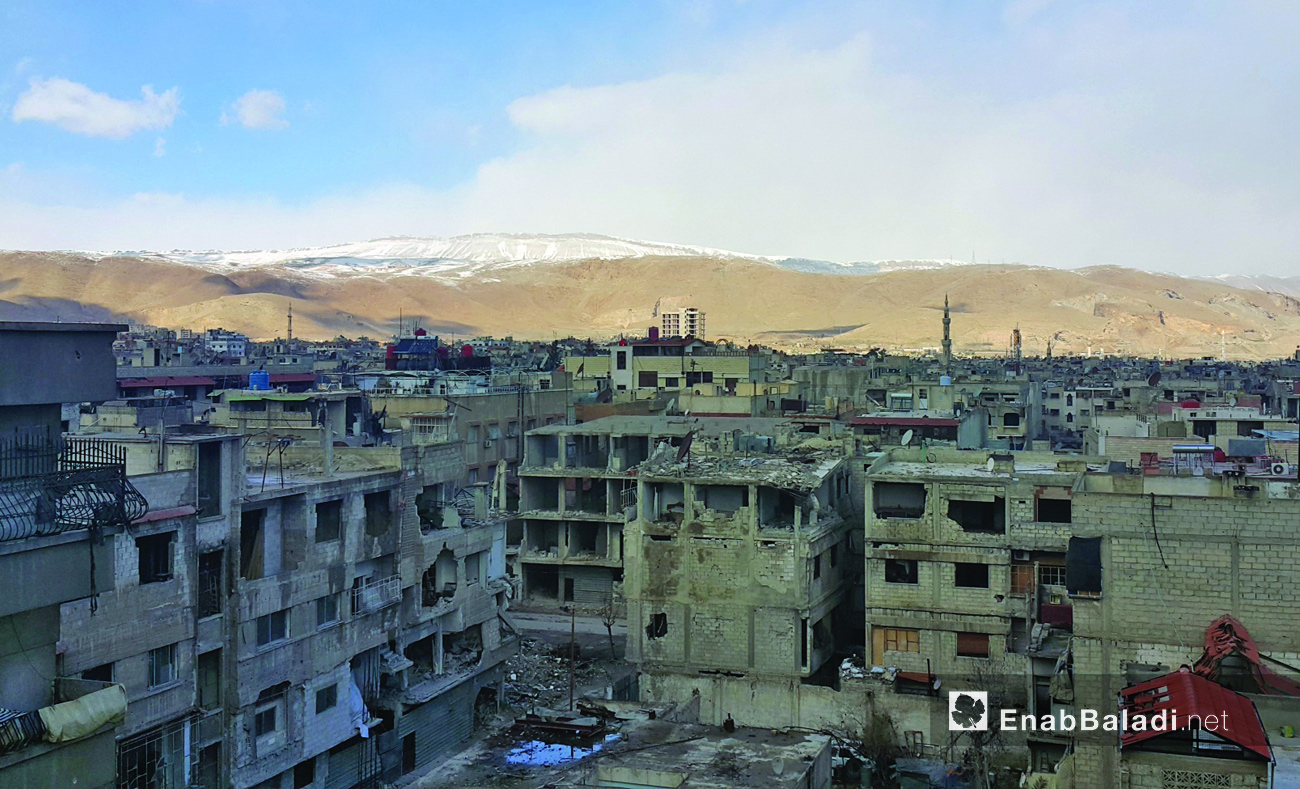 Four years after the loss of Al-Sabinah in south Damascus and the morale and military losses it inflicted on the opposition in the province, rebel control today is limited to parts of the eastern Ghouta and three towns in south Damascus, as well as dispersed pockets in Qalamoun as Damascus districts await a fate similar to dozens of areas which the regime has recaptured either through fighting or displacement.

Opposition control in Eastern Ghouta is limited to the central and northern sectors which includes the towns and cities of Douma, Harasta, Zamalka, Arbain, Saqba, Ain Termeh, Jisrein, Ain Sawa, Outaya, Al-Nashabiyeh, anf others. All of them are under siege by the Syrian regime and there is continuous fighting on the northern, eastern, and western fronts.

The opposition retains three main districts in the northern Damascus suburbs, including the Jobar district, which is the gateway to the eastern Ghouta from the western side and has seen open battles and confrontations, which have not calmed between the regime and its militias on one side and opposition forces on the other. Meanwhile the people of the Al-Qabun and Barzeh districts live in relative peace and quiet as a result of entering into previous truce agreements that have been punctuated by regime breaches as recently occurred in Al-Qabun.

Opposition control is limited to the tons of Babila, Yelda, Beit Saham, Aqraba, while the Yarmouk camp for displaced Palestinians and the Al-Hajar al-Aswad area are under the control of the Islamic State group. These areas have seen notable calm since the truce agreement at the start of 2014 despite clashes between ISIS and other factions in the Yarmouk camp.

In the southwestern part of Qalamoun, the city of Zabadani and the towns of Baqin and Madaya — which have been under siege by Lebanese Hezbollah forces for about year — have avoided bombardment and military operations after entering an agreement with the regime. Similarly, this also applies to the towns of Damir, Jiroud, Rahiba and Nasiriyah in Qalamoun.

Eastern Qalamoun and the desert areas in the eastern countryside of the province have seen an undeclared “truce” between the Free Syrian Army and Assad’s forces, however, it witnesses clashes between the two sides in confronting ISIS, which is very active in this region.

Damascus and its countryside a safe haven for Assad

Assad forces are trying continuously to clear the area of the capital Damascus of any opposition presence. These efforts have manifested recently in an attempt by the forces to storm the Ghouta from the Harasta side on January 25, 2017, after a calm that lasted for more than a year and a half.

For its part, bombardment on the Al-Qabun district in Damascus on February 2, 2017, was a clear turning point in events. After the areas fell under the control of groups in the Syrian opposition, warplanes struck it with rockets, causing deaths and injuries.

The towns of Madaya, Baqin and Zabadani are not a stumbling block for regime efforts to join them to areas under its control in the region. Its forces and Lebanese Hezbollah fighters have long placed the areas under siege while Hezbollah is overseeing campaigns of displacement and destruction in the region.

Although opposition fighters are still controlling both Damir, Nasiriyah, Rahiba, and Jiroud northeast of the capital, they are not as important as the areas of southern Damascus and the eastern Ghouta, where cities and towns under opposition control are spread on the outskirts of Damascus.

Promotion for the evacuation of the Ghouta’s people

After meetings over the last few months in the city of Douma between a delegation of the Syrian regime, which entered from the Wafideen camp checkpoint to meet with local figures, delegates proposed an agreement to leave the city, but the rebel groups of the region and civilian figures refused to expel the residents and to leave.

The regime has escalated its bombardment on the Ghouta in an attempt to break the backbone of the people and to get them to agree to the idea of leaving the area.

However, analysts consider Douma an exception from other areas in the Damascus countryside, as it has “military power” represented by rebel groups which enter near-daily battles against Assad forces, while the area of the active fronts surrounding it totals about 40 kilometers.

Observers expect that the regime will intensify its efforts to clear the area, which seems to be the case with its announcement of the opening the Wafideen camp crossing from the Harasta and Douma side, as a crossing to remove residents, under Russian sponsorship.