The Ability to Untie the Not: Syrian Wives and Divorce in the Time of War 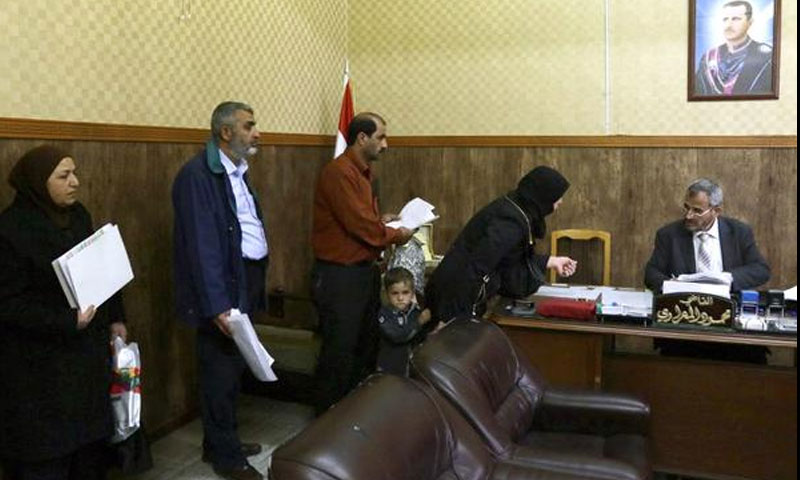 Hiba has been married for a few months only when her husband was called to military service. She accompanied him to Turkey, where he left her and traveled alone to Sweden. He lives there now, forgetful, according to Hiba, of his wife, who in her womb she carries an embryo that will have the name of his family, the one which rejected her after she has been abandoned by their son.

Hiba is one of the dozens of women, whose fate has become unknown after the detention, the travel and disappearance of their husbands. Seven years of war were enough to change the patterns and the fundamentals of the Syrian society from the inside; the period was also sufficient to create new procedures that were not common before, one of these is “unilateral divorce,” which gives a woman the right to divorce herself. This authorization, which is called “Ismah” or “talaq-e-taufid,” has become so popular in the Syrian courts and one of the most important conditions which a girl imposes on her suitor upon issuing a marriage certificate from the court.

Hiba’s voice, while we talked to her, showed the amount of grief and misery she lived. The last call she received from her husband was about a year ago though he promised her to work on the reunion procedures once he has set a foot in Europe. However, he forgot and broke the promise, and there was no news about him or any phone calls.

“I justified the absence of his phone calls and attributed it to different reasons: His lack of money and being overwhelmed by continuance work […] until I was told the news of his marriage to another woman from one of my acquaintances.” The news struck Hiba like lightning. Accordingly, she decided to return to Syria and start with the divorce procedures for she had the “Ismah” or the right to unilateral divorce.

Hiba now is waiting for the divorce procedures to end so that she can start a new life. She also advises the girls who are about to get married to follow her steps and to make her ability to untie the marriage not in a unilateral manner the foundation of the marriage certificate.

A Useless Addition:  Unilateral Divorce in the Syrian Law

Enab Baladi observed the Syrian Personal Status Law; it says that only the man has a right to divorce. However, Article 87 of the law says that a woman has the right to unilateral divorce in two cases. The first is through having an agency appointment if the wife stipulates that in the marriage certificate. In this case, if a woman gets a divorce, her husband cannot force her into the marriage. The second is when a husband makes a full authorization, according to which a wife can divorce herself. In this case, he can cancel the authorization whenever he would like. The latter type is the most common form in Syria.

Lawyer Ahlam, who used to work in Damascus’ administration of justice and preferred not mention her full name, said that the law did not frankly mention that a woman has the right to “unilateral divorce”. Nonetheless, it gave her the right to add whatever conditions she desires to the marriage certificate, providing that the conditions must not contradict the law and should not be binding for the husband. For example, if she stipulated to have “the right to a unilateral divorce” in the marriage certificate and divorce happened, she cannot reunite herself with her divorcee, and she needs a new certificate and a new dowry, exactly similar to the first certificate.

According to the lawyer, the ways differ and the result is the same – If the wife stipulated to have “the right to unilateral divorce” in the marriage certificate or she has forced the husband to make her an authorization or an agency appointment  to be able to divorce herself, she will need to file a suit for separation.  Practically, the judge does not issue a judgment of separation before 30 days have passed after the suit has been filed. However, the husband has the right to “administrative divorce,” which does not require notifying the wife or a “suit for separation.”

Enab Baladi interviewed Um Abdulah, who said that “Syrian security forces detained my husband at the Syrian-Lebanese borders in 2014, before my eyes.”

Um Abdulah describes the moment, which changed her life once and for all. She was during the first months of pregnancy, and she has married only three months ago. However, she was forced to return to Damascus alone, with a “travel ban.” In the summer of the same year, she had to travel to Turkey illegally due to security pressures relating to her being the wife of a detainee. Reaching Turkey, she spent her upcoming years moving between her relatives and women group houses.

The Syrian Network for Human Rights has documented 117,000 Syrian detainees with their names. However, estimates indicate that the number is more than 215 thousand detainees; most of them are in the Syrian regime’s detention centers. There are not any specific or approximate statistics about the numbers of married detained or disappeared people.

The  Syrian Courts have witnessed many divorce requests filed by wives whose husbands are missing for different reasons, for these women either need to leave the country with their children or are in need to get married again due to financial difficulties. Considering such conditions, women wonder: where is the way out?

According to the lawyer, the Syrian law does not admit a separation request proposed by a wife on the ground of the disappearance of a husband for such a request demands notifying the husband and providing him with a paper version in a known location. However, wives with missing husbands are, these days, resorting to one of two ways:  the first is filing a suit of separation with regard to the disappearance of the husband under a condition which says that he must have been missing for a whole year. The second is waiting until four years of disappearance would have passed. In this case, the law considers the husband as dead, accordingly, the marriage certificate as canceled.

Some wives have been resorting to illegal means. They keep the disappearance of their husbands as a secret and file a suit for separation. In case the husband does not show up for two successive sessions, the judgment would be on the wife’s side granting her a separation.

Um Abdulah assures that her two-and-a-half-year-old child is the reason why she is seeking to have a separation and to remarry, especially after the various difficulties she has been facing in exile. She realized that she cannot provide her child with a decent life unless she reaches a state of stability and safety.

Judicial sources confirmed a marked increase in the divorce rates in Syria for they have registered 40 thousand cases at the beginning of this year, mostly in Damascus and its countryside, according to “Al-Watan” newspaper on 31 October.

The sources pointed out that a quarter of these cases occurred because of the long disappearance of a husband “for security reasons,” while 75% of them were due to household disputes between spouses.

According to the first shari’a judge in Damascus, Mahmoud al-Marawi, the percentage of divorce in marriages where wives have the right to unilateral divorce reached 70%. Accordingly, the judge called for limiting that right to certain cases, including customary marriage, for under the war, registering a marriage in the court became difficult and having the mentioned right would allow a woman to register it later on. A woman can also have that right to deal with issues relating to “reunion” and sometimes to divorce herself in the future.

To overcome the difficulties which started to appear in society lately, al-Marawi advised women to demand to have the right to unilateral divorce as a condition, if the husband was to marry another woman so she would be able to divorce herself whenever she wants.

Sharia-Based Unilateral Divorce Types and Differences between Them

Even though she did not demand to have the right to unilateral divorce in the court issued marriage certificate, she does not regret the step. Rather, she was happy about it, and she will be doing the same thing with her daughter in the future. “It preserves the rights of a woman, facilitates filing a suit for separation in case she wanted a divorce and the man refused,” she said.

There are three types of Sharia-based right to unilateral divorce explained by the lawyer Sheikh and Dr. in international law, Abu al-Khair Shukri when he told Enab Baladi about the differences between “authorization,” through which a man gives the woman the ability to divorce herself. In this case, the husband can withdraw the authorization and deny the woman’s right to it if he wishes and “ownership,” through which the husband gives the wife the right to all her affairs, for example, he might say “yourself and your divorce all belong to you,” in this case, a wife can divorce herself and, even more, when she wishes. However, in this type, the man cannot deny a woman her right to “ownership”.

From Ownership, “agency appointment” is derived, which is one of ownership’s manes. However, the only difference between them appears with scholars following al- Shaafa’i method. According to these scholars, the wife should give herself an authorization while the marriage certificate is being written in front of the whole attendees for if she does not do that in front of them the authorization is canceled.

The last type of unilateral divorce is “choice,” through which a woman is placed in a position where she must choose either to stay with her husband or separation, when the husband tells her: “choose me or choose yourself.” in this case, it is up to her to choose whatever she wishes. The choice is just like ownership for the husband cannot withdraw from the wife her right to it once given.

According to Sharia, a woman can demand to have the right to a unilateral divorce, providing that her request follows writing the marriage certificate for a man cannot give a woman authorization, ownership or choice before he himself has had the right to do so.