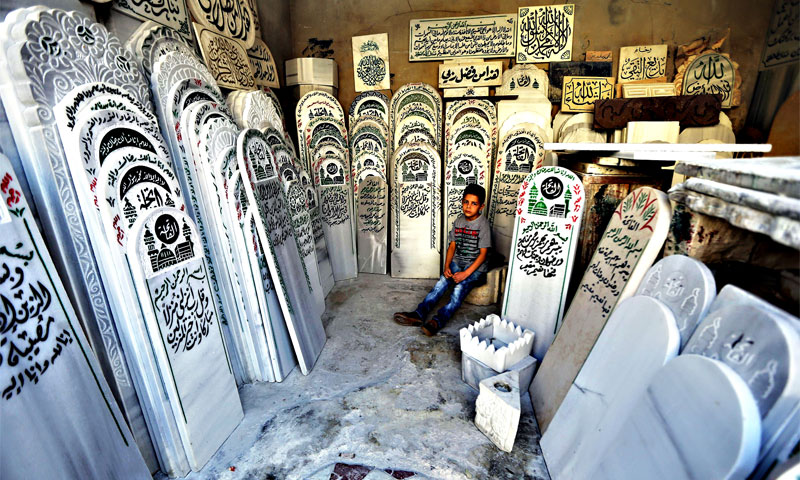 Some residents of Damascus are no longer concerned only with securing their daily subsistence necessities and have gone so far as to think about death and beyond. The significant rise in the costs of graves that the country has witnessed has made people who do not own one yet anxious, hoping they could be relieved and accommodated by their dead relatives and acquaintances in their graves.

However, what has thwarted their expectations and made things even worse for them were orders by the governor of Damascus, Beshr Al-Sabban, given last May to prohibit any dead person from accommodating in his grave someone who does not belong to the same family or does not carry the same family name.

According to Hussein Nofal, president of the General Board for Forensic Medicine, in a statement delivered to Al- Watan local newspaper in June 2016, at a time when the rates of war casualties are reaching a peak in Syria, the number of natural deaths in the “safe” zones has also augmented to reach 70% of the total number of deaths in the country.

Nofal also explained that the reason behind such elevated rates is the amount of pressures a citizen is subjected to because of the present conditions in the country, the ways many citizens lost their homes, their properties and their savings, which in turn caused the emergence of many cases of heart and brain strokes.

Despite the absence of official statistics on the average number of deaths in the Syrian capital, former director of the mortuary office, Hussam Al-Nuktah, told the same newspaper that the number of deaths in Damascus ranges from 18 to 50 daily with a daily average of 25 deaths.

This remarkable increase in the number of deaths in Damascus is out of sync with the number of available empty graves despite the fact that the number of graveyards in the capital exceeded 33, comprising more than 100 thousand graves throughout the city. Thus, securing a grave has become a very challenging task for Syrian citizens that turned out to be even more challenging after the governor’s decision to prohibit grave-sharing.

“Fraud” Infects even the Graveyards of the Capital

The ban on hosting strangers in the graves has stirred controversy across the capital while people who do not own a grave yet are still confused as to what shall befall them after they die.

The Syrian citizen Fouad Al-Debs told Enab Baladi that the governor’s orders, although not officially issued, are all being employed in Damascus graveyards and burials in graves have been restricted to the members of the same family only (forebears and offspring).

Al-Debs, the owner of two graves in the cemetery of Bab Al-Saghir in Damascus, confirmed that the burial of the deceased requires that his family provides a family statement proving that the dead person belongs to the same family as the owner of the grave. Hence, the process also requires the testimony of one or two of the legitimate heirs of the grave. He added that the extraction of the family statement “may lead to delaying the burial of the dead person due to slow legal procedures or to the possibility of overlap with a public holiday.”

However, Mohammad Hamamia, the head of the mortuary office, said in an interview with the local radio “Sham FM” that the family of the deceased can provide a family register in case a family statement was impossible to get. He also emphasized that the governorate has also issued orders to allocate an office in the burial bureau open all days in order to extract family data.

Damascus governorate officials warranted that such restrictions do serve the best interests of Syrian citizens to protect them from potential fraud. However, Fouad Al- Debs confirmed that cases of abuse and illegal grave trade are increasing, as some people are still taking advantage of the increasing number of deaths and the lack of empty graves.

He pointed out that some people resort to renting the grave from strangers to bury the body of one of his relatives for  100 thousand Syrian pounds annually (about 200 dollars) until another cadaver is buried on the existing dead body. Yet, in some incidents the relatives of the deceased, who is buried in a rented grave, took advantage of the absence of the original owner (mostly outside the country) and transferred the ownership of the tomb using fake documents.

The Syrian Ministry of Awqaf considers that the graves in Damascus are “not a commodity” which can be sold or bought. Thus, all the tombs of the capital are owned by the waqfs. All citizens have the right to be buried, in case of death, in graves following the recorded chronological order of death.

The Syrian law has regulated the issue of ownership of the tomb by identifying persons who have the right to be buried there. Accordingly, a lawyer in Damascus, who preferred her name to be kept off the record, told Enab Baladi that the Legislative Decree No. 25 of the Syrian law prohibits the burial of “strangers” who are non-relatives of the tomb’s owner.

In effect, the ownership of the grave is usually determined according to the first recorded death, so that it is transferred to the male heir, while retaining the right of the female. Thus, the law does not allow the burial of anybody who is not one of the legitimate inheritors of the burial place.

The lawyer added that: “For decades, there have been violations of the law”. The inheritors of the tomb were allowed to host a dead person who is not from their family. Consequently, the idea of hosting has become a prevailing norm   in Damascus which reveals the host’s “generosity” when he relieves the family of the deceased from the burden of searching for an unavailable empty place for burial.

In this case, two inheritors of the grave, who are not siblings, must attend the mortuary office and sign a permit to host the deceased in the grave. Then Five years after that, the grave’s ownership is retrieved by the hosting party without granting the right for burial to anyone of the hosted party’s heirs.

The Syrian law forbids the sale of graves entirely while allowing them to be parted with only among the legitimate heirs. Yet, the citizens sell them among themselves without resorting to the court, and then part with the grave’s ownership in the mortuary office pretending it is for free. Finally, they obtain a court order to transfer the property.

According to the lawyer, despite some citizens’ disapproval of “the hosting ban”, it does really protect so many of them from fraud. She points to the increasing number of law suits, in the courts of Damascus, claiming re-establishment of grave ownership.

The Soaring Prices of Graves: The “Najha” Cemetery is the Key

At a time when the relatives of the deceased are supposed to be concerned with their grief, they also assume the responsibility to honour their loved one in a proper manner. They get busy securing him/her a grave inside the walls of the city. Such a tomb can sometimes cost a million Syrian pounds (about 2000 dollars).

The prices of tombs in the capital vary according to the cemetery itself and its location, since prices are not fixed by the Syrian law that entirely prohibits grave selling. The cost of the grave for sale starts from 500 thousand Syrian pounds and may reach 1.5 million pounds, according to what Mr. Fouad Al-Debs told Enab Baladi.

The cemetery of Bab Saghir, near Al-Shaghour neighborhood, and Al-Dahdah cemetery, in Bagdad Street, are considered to be the most expensive graveyards in the Syrian capital. The price of a single tomb in one of these two cemeteries might exceed one million Syrian pounds, and it may be even sold in what is often known as a “black market.”

However, due to the poor economic conditions the Syrian citizens in Damascus are going through, it has become even more difficult for them to afford a grave the cost of which is far beyond their financial capacities. In effect, most of them hope to be hosted in tombs of their acquaintances when they die.

With few options left for the locals of Damascus, after the decision to ban grave hosting, the family of the deceased might resort to bury the body in the “Najha ” cemetery of Rif Dimashq. The cemetery is located 13 km away from the city centre, and because it belongs to the Ministry of Awqaf graves in it are extremely low-priced.

According to the statistics of the Burial Office of 2016, the “Najha” cemetery counts nearly 42 thousand graves, three thousands among them are empty. However, most of the residents of Damascus are not willing to bury their dead in “Najha” due to its remote location from the city centre. Such factor can prevent them from constantly visiting their dead relatives in their graves. Besides, the Syrian community imposes specific burial rituals which necessitate a ceremony of which both the family and the deceased can be “proud.”