Dying in Exile: Funerals without Mourners 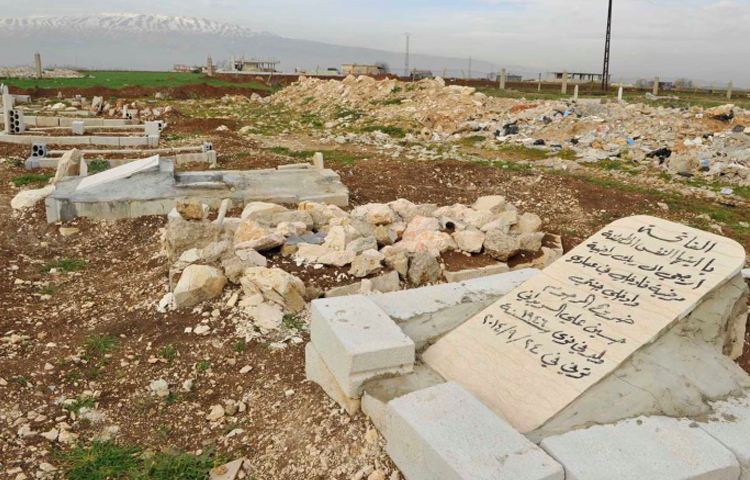 It seems that the media outlets cover Syrians’ ‘big ‘sufferings whereas the daily struggle of Syrians in exile may be considered small ‘sufferings’. ‘Normal death’ in exile might be one of those ‘small sufferings’.

Dying in exile causes psychological, legal and financial complications for the dead and the living alike. It enhances feelings of estrangement. It intensifies the experience of death and grieve especially when a funeral does not include any mourners.

Omar, a student in engineering faculty, and his family fled Syria and took refuge in Lebanon. They left Damascus countryside after security situation worsened in their area in the hope of a return home.

They neither knew that their stay will linger in Lebanon nor expected the father would die abruptly early 2013.

Beirut where graves are valued dearly

Omar says his family’s instant decision was to transport his father’s body to Syria. There was no time to grieve his death, they had to work out the tiring legal procedures.

‘They told us we have to get a paper from the hospital and obtain a death certificate from the Mukhtar (head of neighbourhood). Then we have to go to the Syrian consulate to get authorization for transporting the body and this process will take three days,’ Omar said.

Since his father died on Saturday, the family had to wait to start with the legal procedures on Monday and finish paperwork on Wednesday.

His family did not like that, ‘we did not want to be late in transporting the body. So, we decided to bury him in Lebanon and the long pursuit for a grave begins.’

The family were shocked because of prices of graves in Beirut. The price exceeds 2500 dollars, if found. Most cemeteries in the city are for Lebanese only. After talking with contacts and officials about the problem, the family decided to transport the body to Bekaa (a valley in eastern Lebanon) since ‘legal procedures are easier their and graves are way cheaper.’

The family contacted relatives in Bekaa to find a solution for their problem of not being able to bury their father neither legally nor financially.

Finally, one of the cemeteries agreed to sell them a grave for 1 million Lebanese Pounds (equals 650 Dollars), adding 100 dollars for the cost of transporting Omar’s father from Beirut to Bekaa.

The family decided there is no other option. Omar says, ‘we rented an ambulance and got a death certificate from the hospital and Mukhtar. We buried him there. May God grant him mercy.’

His father’s grave became an emotional attachment for Omar and his family in Lebanon. Whenever they discuss leaving to another country, they think of him being in Lebanon.

‘Burying my father outside Syria was very hard on us. It affected us deeply and sank in. We often discuss taking his remains back with us to Syria when we return. Leaving to another country and leaving Lebanon now depends on our ability to transport our father’s body with us.’

Omar’s grandmother died shortly after his father. He had more experience to deal with the situation.

‘Unfortunately, it turned into a routine. The price of her grave was cheap. The cemetery had a road beside its wall and because there are not enough graves, people started digging graves in the road. The grave cost 350 Dollars,’ Omar said.

Expensive graves are a challenge for Syrians in Lebanon. Many Syrians cannot afford renting a room on over ground to afford buying a grave. To solve their problems, they turned to individual simple solutions.

‘Sometimes people help in collecting money for the family of the dead. A while ago, a rich man bought a land on a mountain in order to make it a cemetery for Syrians; however, digging it is very difficult so it is hard to bury someone there,’ Omar said.

Omar’s experience with the challenge of finding a grave for his father and his grandmother made him think of ways to help people in Lebanon regarding this issue.

He said he and a group of activists are trying to contact a number of municipalities in order to buy a land form government. ‘But we did not get a response so far. In addition land prices increased. One Acres costs 70 thousand dollars.’

Muhammed, a college student from Hama, his situation was not very different from Omar’s. His father passed away in the fall of 2015. He said ‘the eldest in the family’ passed away. His family lived the same confusion Omar’s family went through; transporting his body to Syria or bury him in turkey.

‘After consulting men in the family we decided to bury him in Syria. I went to an airline company and filled a form to transport the body to Syria through Beirut. The officer at the company had another opinion.’

The officer at the airline company told Muhammed about the security issues they would face from Hezbollah people and the possible problems in Lebanon. He then changed his mind about transporting the body ‘I told my family that we will bury him in turkey. This is a land of Muslims and Azan (call for prayer) is recited close to the cemetery, too.’

Muhammed obtained the death certificate, and went to the cemetery or what is called ‘mezarlik’ in turkey. He requested a grave for his father,

‘they gave me a gravestone for the grave and set a date for the burial to be following noon prayer.’

The body gets washed in the cemetery then it is transported to close-by mosque to pray on the dead,

‘the grave here is for free and it’s a service offered by the municipality. Whoever wants to pay for building a grave of marble can do that from their own pocket.’

The solace for Muhammad’s family was their ability to visit his father’s grave all the time even if he is buried in a land that is not Syria.

‘He is beside us. We visit him whenever we want. In Syria even graves are exposed to shelling and destruction. We have the model of Prophet Muhammed; he was buried in al-Madinah (the city which the prophet migrated to) even though Mecca was the closest city to his heart,’ he added.

‘My aunt left Daraya (suburb of Damascus) and took refuge in several cities in Damascus countryside before she left to Jordan. Afterwards, she tried to travel to Egypt and could not. Finally, she travelled to Turkey to die a month later in Adana (a city in south of turkey) away from all her scattered children between Jordan, Lebanon, Egypt, and Syria,’ journalist Kholoud Waleed said.

It is just like in the verse of the Quran: ‘No self knows in what land will die,’ pointing out the toll life changes took on her families, just like all Syrian families.

Kholoud talked about her feelings and observations during the burial of journalist Naji al-Jaraf (who was killed on 27 December in Gaziantep, Turkey) in an Arab cemetery in Gaziantep.

She says, ‘it is very difficult to be held by a foreign earth. It’s very ugly to imagine. Can you imagine that the Sheikh requested a translator when they were placing Naji’s body in the grave to say the testimony (the Islamic testimony said before burial)? Everything was weird!’ She exclaimed.

There was another burial of a Syrian at the same time with Naji’s. He was alone. Kholoud says, ‘he was not accompanied by anyone except for two men who asked Naji’s mourners to pray with them over him. He was all alone. If it was not for Naji’s funeral, there would not be anyone to pray on him. May God grant him mercy.’

It is a strange death, adding legal complications and cemeteries unwilling to embrace Syrian bodies. Kamal Kuzber, officer in charge of displaced Syrians in Sidon (south of Lebanon) municipality. He issued a fatwa to burn Syrian bodies or throw them in the sea because there is no place for the dead in the already overcrowded cemeteries.

The cemeteries in Lebanon are tight for the Lebanese. Is the underground world also getting tighter for Syrians? Kholoud said this is the state of the stateless Syrians today.