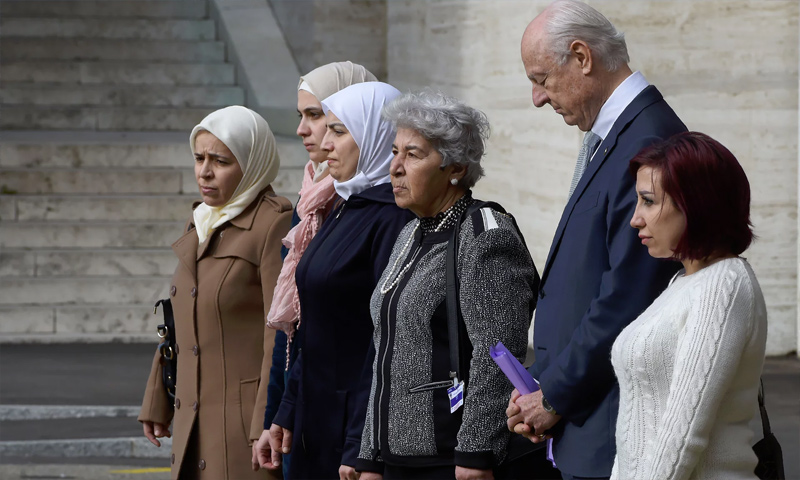 Syrian women whose family members have been detained or victims of forced disappearance, alongside the UN envoy Staffan de Mistura, 23 February 2017 (AFP)

Syrian women whose family members have been detained or subject to forced disappearance have presented their requests to the UN envoy to Syria, Staffan de Mistura, and other influential diplomats involved in the Geneva negotiations over the conflict in Syria.

On Thursday, the women demanded “the immediate release of our family members who were arrested without committing any crime that could justify their imprisonment”.

The women delegation met with De Mistura twice and received promises that he would look into their demands and work to resolve them. He also read a statement in front of journalists outside the UN building. The statement calls for “putting pressure on the Syrian regime and all parties to the conflict to immediately reveal all the names of detainees, their locations and their conditions, as well as to end all torture and ill-treatment. In the case of detainee deaths, they should provide death certificates that include the cause of death and reveal the place of burial”.

Enab Baladi spoke to Emna Khoulani, one of the members of the campaign who is the sister of two detainees. She asserted the need to raise the issue of detainees above “the negotiations”, as it is a “humanitarian issue that should be dealt with separately from the progress or freezing of the negotiations”.

Khoulani referred to the simultaneous protests held in Idlib, Eastern al-Ghouta and Lebanon in which more than 300 women participated, even though they had only heard of the protests a few days before. They also sent pictures of their detained sons to be displayed in Geneva. 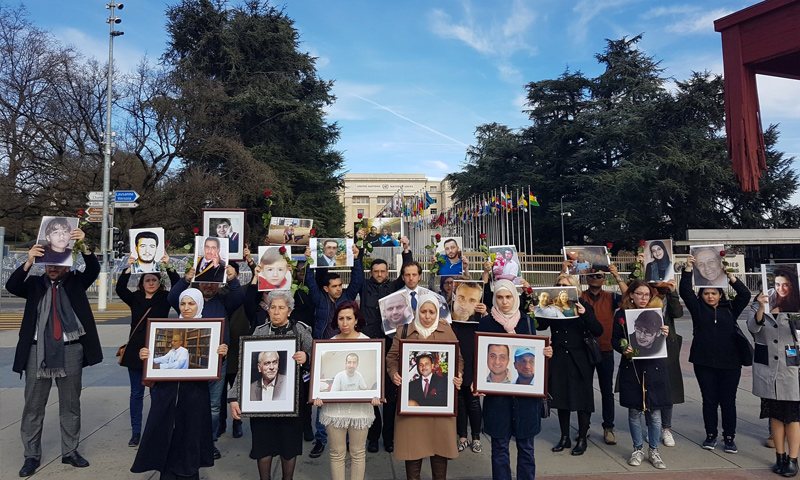 Syrian women whose family members have been detained or victims of enforced disappearances organize a protest in front of the UN building in Geneva, 23 February 2017 (Syrian Campaign)

According to the Syrian Network for Human Rights, there are more than 106,000 detainees and victims of enforced disappearance in Syria. The regime is considered responsible for arresting 87% of them.

The statement demanded “the abolition of all emergency courts, particularly field courts, the terrorism court and military courts, as well as abolishing all their decisions and guarantee a fair trial in national courts under the supervision of the United Nations.”

The campaign is titled “Families for Freedom”. The families want to continue working in order to create a “cumulative effort that includes the largest number of families regardless of their affiliations”. 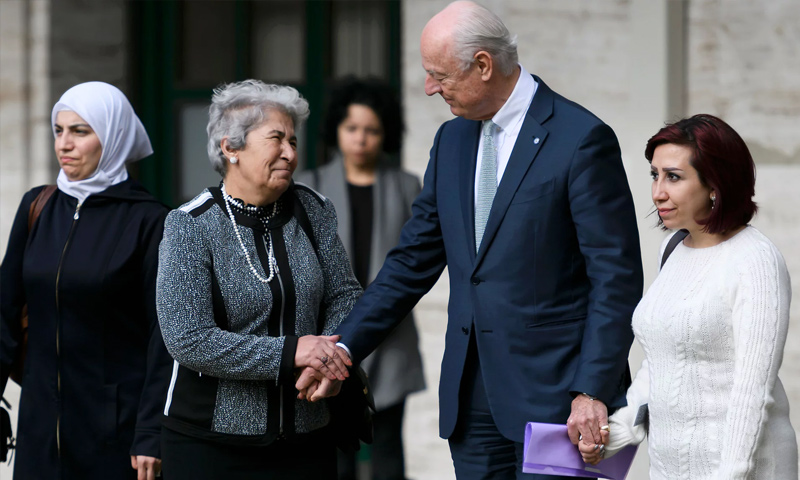 Syrian women whose family members have been detained or victims of enforced disappearance with the UN envoy, Staffan de Mistura, 23 February 2017 (AFP)

The women are supported by local and international human rights and women’s organizations. Emna Khoulani confirmed that their demands are made on behalf of all those who have a detained family member in Syria and that these are not personal demands. She emphasized that their position is “against enforced disappearance and arbitrary detention, which are mainly carried out by the Syrian regime and by all the parties to the conflict”.

It is expected that the women will hold a series of intensive meetings with a number of political figures and diplomats with the aim of promoting the campaign and influencing public opinion in order to apply pressure to help achieve their goals.