Forced Displacement: The Lesser of Two Crimes in Aleppo 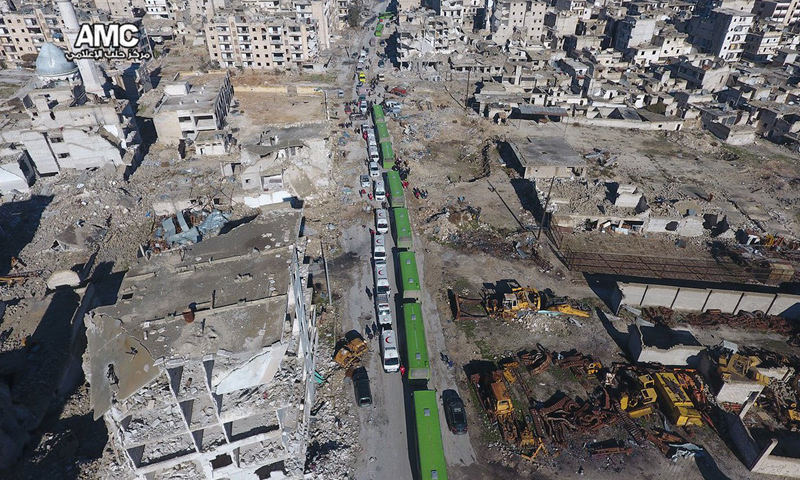 After a long deafening silence and inaction by the world towards Assad and Putin’s horrible crimes in the city of Aleppo, the international community spoke, demanding additional crime.

Today, the implementation of the agreement to allow the people of Aleppo to leave started. Although this agreement saves those left in opposition controlled areas in Aleppo city from eminent massacre, it reflects an international agreement on a crime.

Saving lives is an urgent priority of course, but the evacuation of Aleppo’s people amounts to a war crime and a crime against humanity of forced displacement, and the international community and the United Nations is watching. This crime is prohibited by the “International Humanitarian Law”, 7 Security Council resolutions and other international agreements. These theoretical UN and international principles of protection proved useless in helping people of Aleppo to avoid being forcibly displaced from their land. All those principles were replaced by one principle: “Assad, or we burn the country”, which was launched by the Syrian regime in the early days of the start of the legitimate popular claims in Syria in March 2011.

The Syrian regime and its allies imposed a tight blockade on opposition areas in Aleppo, and launched a violent military offensive on them. The Russian air force and expertise, and sectarian militant groups, including the Lebanese “Hezbollah” and the Iraqi “Nujabaa Movement” led by an Iranian officer, all contributed to this terror campaign against Syrians in Aleppo.

The siege, indiscriminate artillery shelling, and intensified Russian air strikes killed and displaced thousands of civilians including children and women. The bombing destroyed the infrastructure in the area, and targeted schools, hospitals and civil structures.

The regime and its allies followed the scorched-earth policy and indiscriminate bombing, with the purpose of destroying the infrastructure in the areas controlled by the opposition and to terrorize civilians. This campaign of terror led to the displacement of tens of thousands who have fled toward the areas of the regime to escape its bombardment, and the remaining of around 70 thousand civilians were trapped in a very small spot, while subjected to non-stop barbaric bombing, that even used internationally banned weapons.

The silence of the international community against this horrible crime raises suspicion of a pre-agreement on the decision to allow the Syrian regime to take Aleppo city. The opposition armed factions and groups around Aleppo, also kept silent and did nothing to save the trapped civilians or even to tackle the troops besieging them. Arab, Islamic, and Western people were silent too.

Civilians remaining in the besieged Aleppo lost any hope of being rescued them from an eminent massacre, and reached a decision that nobody in the whole world would do anything to protect them from the Syrian-Russian killing machine.

Aleppo’s people agreed to be forcibly displaced. They agreed to an additional crime against them, and made up their minds to accept the lesser of two crimes. At this moment, they began to call who might listen to secure safe passages for them to escape the massacre.

Arab and European countries have witnessed protests and events advocating the people of Aleppo. Clerics, parliamentarians, international organizations and governments and heads of states, condemned the Russian and Syrian crimes and demanded to stop it and to protect civilians or secure the exit to where they wish.

Turkey and Russia have reached an agreement to secure a safe passage for the people of Aleppo, after Russia also received calls from US and European governments asking it take responsibility to protect civilians.

The Syrian regime and the Russian government are the only parties who oversaw the displacement. international organizations, other governments and even the United Nations did not interfere in the procedures of the displacement. Although Russia called on the UN to assist in the evacuation of civilians. Russia and the Syrian regime are to be the parties responsible for this crime.

After Assad regime completes its control on opposition areas in Aleppo, the victims would lose a tremendous amount of physical evidence of the crimes committed by the regime and its allies against them. Assad will bury the evidence with the remains of the victims of his crimes.

What remained is a call to collect and preserve available evidence and document this crime, until such time that Syria would be referred to the International Criminal Court. The impunity caused by the lack of evidence, amounts to another crime against the victims.