Aleppo: Sacrificing One’s Self for Others 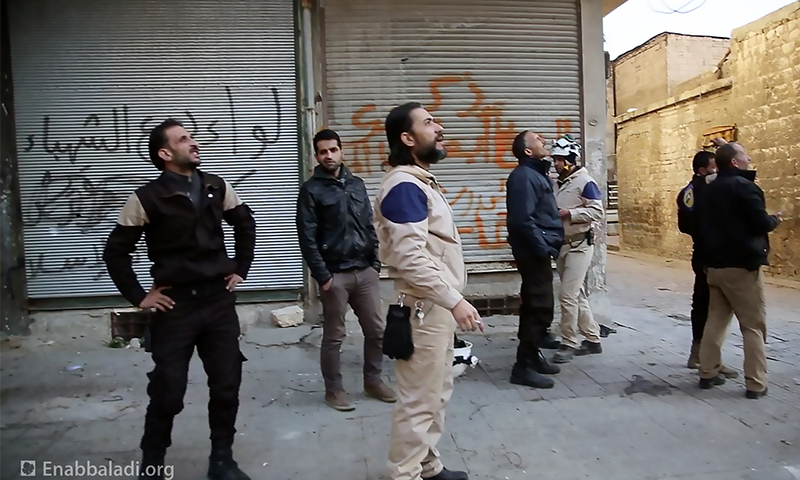 Muhammed Atta Faraj stands in one of the ‘liberated neighbourhoods’ in Aleppo. He is leader of a group in Syrian Civil Defence in Bab al-Nairab Centre in Aleppo. He stands with a group of workers in the civil defence along with local people in the area.

They observe the sky in expectation of a helicopter; the one they are familiar with dropping explosive bombs or missiles on a target in their area.

Faraj holds his wireless device and talks to his colleagues to help him. There is a warplane in the sky and it might drop its destructive and explosive shipment at any minute.

Faraj waits with local civilians in the neighbourhood. The scene is repeated many times a day.

Faraj is married with three kids. It is very difficult for him to live with this insecurity. He prays they stay safe.

Faraj also wishes the same for his fellow citizens there. He wants them to be safe too and that is why he continues to work with SCD.

He has passion for rescuing others. It makes this life in turmoil bearable and gives him the motivation to go on with this profession.

‘I volunteered in SCD when a group of young men suggested starting a centre to rescue civilians. I wanted to help. We were seven back then and now became 25 people,’ Faraj told Enab Baladi.

According to Syrian observatory for Human Rights, Syrian regime warplanes launched 42.234 air raids which killed 6.889 persons and wounded 35 thousand between 20th of October 2012 and 20th of November 2015 in opposition controlled areas

Faraj walks to show us what happened to his burned house which was shelled few days ago, ‘we had very simple equipment and tools. There were no procedures or equipment to transport the victims. We needed heavy and modern equipment and vehicles, but those were not available. We worked manually all the time.’

He narrates what he was exposed to during his work and what his family went through because of the shelling, ‘one time, I got a call that a bomb was dropped near my house and there were causalities. I went to check on my family first and instantly transferred them to a safe place and then headed to work with my friends to rescue people.’

‘One time an explosive barrel dropped on al-Haydareyyeh Square where it is an overcrowded civilian area because it is central for transportation. There, three SCD workers died along with a Canadian journalist who was with us whereas I survived,’ he added.