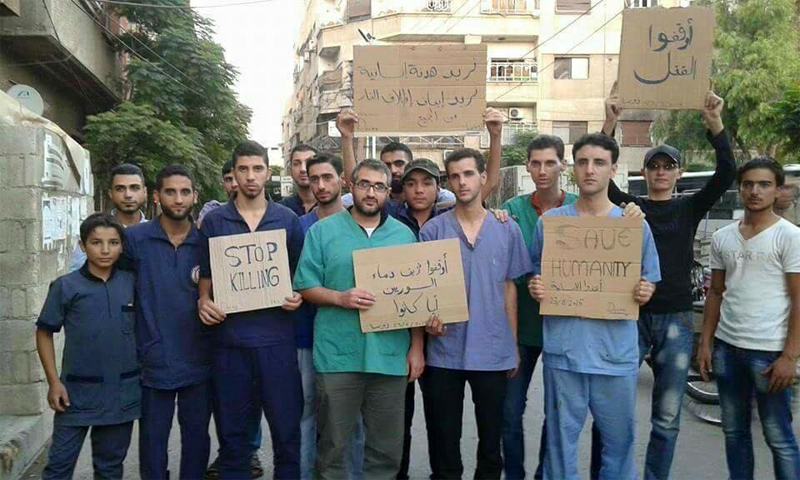 Revolution is the priority

When Syrians began their protests at the start of the Syrian revolution, many did not expect that the revolution would prolong for months. They derived their hope and expectations from Tunisia and Egypt’s Arab Spring’s experiences. They also draw their hope from universals ideals that justice will prevail over oppression and that the oppressed will triumph over the tyrant. These reasons were enough for them to devote their time and invested their futures in the revolution.

To that end, Syrian activists focused all their time and energy on the revolution putting different aspects of their lives “temporarily” on hold whether their education, work, family or hobbies. They chanted ‘no study no teaching until president falls’. They would direct all their energy into the revolution until they achieved their desired aim and the revolution succeeded. As a result, many students halted their university education or their business for a year or two thinking the revolution would soon succeed. It did not. Has this approach continued until now? What are the priorities of activists today?

Nur al-Musa, a virtual name, is an engineering student from Daraya (city in the western countryside of Damascus).

Her life revolved around protests and revolutionary activities in the first two years of the revolution. She said: “Activities related to the revolution were my priority and everything else was secondary and could be wait or be delayed be it my university commitments or family commitments.’

Nur missed many of her university classes because of her commitment to revolutionary activity to the point where she stopped attending completely. She added, “I deliberately did not go to some exams to protest the detention of some friends and the retention of others in besieged and conflict ridden areas whereby those were prevented from attending their universities.’

Few other students shared Nur’s “demonstrative” stand, but she consoles herself saying: “The important thing is that I did what I think fit regarding my principles and values.”

“Back then we were in our house in Daraya,” she added with longing. She made sure she participated in any protest she learned of its organization. She knew about protests being organized from a group of her friends involved in the revolution. She conveyed some of information about her activities in that phase, says: ‘we used to meet to think about new revolutionary activities that would push people to become involved and increase the number of participants, whether in strikes, the distribution of pamphlets, painting graffiti on walls and other ways of peaceful resistance.”

Nur hide activities from her family although her family opposes the regime and are pro-revolutionary in principle, yet they refused to be involved in the movement at that time. According to Nur: “My family did not know anything. I used to spend my time with my partners in revolutionary activity. This made me far from social life. It was as if I was in a different world.”

Things did not continue in this way. Nur gradually started to think about her personal future in conjunction with her family migrating to Damascus, “Frustration started to follow each other and were repeated. Feelings of helplessness began to take over me after I lost the role through which I was participating in the peaceful resistance. The revolutions’ tools on the ground changed from the tools I had… The weapon is the master of the situation and I completely reject the carrying of weapons and I am totally convinced that weapons entering the revolution was the revolution’s biggest deterioration.”

Nur still lives in Damascus until this point in time and she says the idea of moving to ‘liberated’ area to return to revolutionary work is always on her mind, “But that means a big dispute with my family that may reach the point of cutting them out entirely. Even though my revolutionary life is now minimal, but through my volunteer work I try to change people conditions for the better and this is what we sought to do in the phase after the regime falls.”

As a result of all of the above, Nur returned to university. She clarified: “I am trying to build myself scientifically. Despite my delay from my studies, I seek now to graduate and continue in higher studies in one of the European countries. Here in Syria we live in a black hole. Time passes us by without us developing our selves.’ In this way she seeks to acquire skills to offer to the country when she has the chance again.

Regarding change in her priorities since the outbreak of the revolution, she see: “In the first two years my goal was ousting the regime. We thought things were easy to the point we exhausted all our resources in peaceful resistance in the first two years. My priorities today are to build myself based on a relative stability to offer a sustainable effort to the revolution.”

Muhammed is an agricultural engineering student from Douma in Eastern Ghouta. He participated in the revolution since its first day, but his continuous migrations made him describe his revolutionary activities as going through a “hibernation” phase as he calls it. “I tried during that time to finish my studies and get involved in the society again, but I could not. I used to feel the danger every time I crossed checkpoints. Then I decided to return to Douma and it was not besieged at that point.”

In March 2013, Muhammed returned to his “liberated” area, and did not leave again, in the process he left behind his university studies and dreams of graduating. He started thinking of a way to participate in work for his city: “I received military training so I could a carry weapon and defend myself if necessary, but an injury in my foot made my involvement in armed action an impossible matter.”

Muhammed decided to move to medical work. He was trained to deliver first aid in medical points, and said: “Today I live in the medical points. Sometimes that is because there is a pressure on the point due to numbers of those injured after a massacre, and sometimes because I do not want to go back to my empty house after my family left Syria.”

“Our only choice is to go on,” Muhammed added. His life in a besieged area means having many duties that outnumber the capacities available forcing him to stay to offer any assistance he can. He said: “My staying here no longer comes from a revolutionary perspective but fundamentally from a human perspective.”

Muhammed’s prior priorities were to graduate from university, but these are now very far away. “My priorities at this stage are to contribute to reducing pain and make life conditions better here. I will go on until the siege is broken and my family return and I will then continue with my studies and life.”

Mays: Dreams the size of a homeland

Like Nur, Mays was with the revolution in Yarmouk Camp. She made herself completely available for peaceful resistance and its activities made her delete all other aspects of her life. “I do not expect I would have graduated from university if I had not graduated before the revolution. I participated with all I had whether time and effort.” The revolution became a part of every aspect of her life: “I do not remember anything of my personal life that is not from the revolution. I even met my current husband through mutual revolutionary activities. Our dreams were the size of a homeland.”

At that stage, Mays priorities were to increase people’s awareness of their rights and to increase participation in the revolution. This pushed her and her revolutionary surroundings to organize cultural sessions. “We used to prepare sessions to increase political, social, and historical awareness. We used to read books related to this like books about peaceful resistance and lessons from previous revolutions like French revolution in the book ‘Story of Civilization’.”

Mays lives in Germany since two months ago as part of a trip to treat her husband and continue her studies. “My priorities now are different. They are now largely limited to my specialization in my field to offer something that can make a difference in addition to offering refugees here humanitarian assistance.”

From Protesting to Journalism

Tareef, a blogger and university student, told us that he and his friends were waiting for a signal, a revolutionary spark, to begin organizing protests in their city, Homs. “We used to encourage people around us to take to the streets and to protest. We did not have a vision for what would come after the taking to the streets. It was the first year of the revolution.”

Protests decreased in Homs after the regime stormed of Baba Amro for the first time. The protests did not stop, but moved from one neighbour to another. Here Tareef and his friends started to organize different types of activities until the group later on dispersed. “The group I belonged to became itself like the revolution today. The founder of the group was assassinated and others were detained. Some of them survived and saved their lives by travelling.”

Here Tareef moved to media work because of his experience in blogging and writing to convey what is happening in Homs: “I focused on writing and conveying the reality. I observe what is happening and write articles for revolutionary newspapers. This happened alongside my forced confinement at home due to the heightened military presence in Homs. Due to this I neglected my study completely for two consecutive years during which I did not even go for exams.”

“In order not to be firewood for the phase”

Most of the activists close to Tareef joined the armed resistance after three years from escalation of events in Homs while others immigrated. Looking to himself, he felt the two choices unsuitable, “Armed action does not work for me at all and immigrating at that time was not good. That’s why I continued to work in journalism in addition to my return to university.”

Tareef was forced to travel to Turkey over a year ago because he unable to delay his mandatory military service. He continues to what he did in Homs, adding: “Today I am trying to improve my journalist performance and understanding for society and politics. I work with one of the documentation projects for all digital revolutionary materials. I still write opinion pieces every now and then.”

Tareef sees that the current phase has to be about working to develop his personal skills to offer the best for later. He explains: “Working for our revolution is strategic. It is not a matter of a week or a month. We realize that the Syrian course has reached the point of being an international war, and we have to know our roles and capacities so that we are not just firewood for this phase.’

Nur, Mays, Muhammed and Tareef are four activists who were working the same in the first year of the revolution. The priorities and the dreams were the same and although they are all scattered all over the globe they still believe that he/she is preparing for an expected role tomorrow no matter how late it comes.