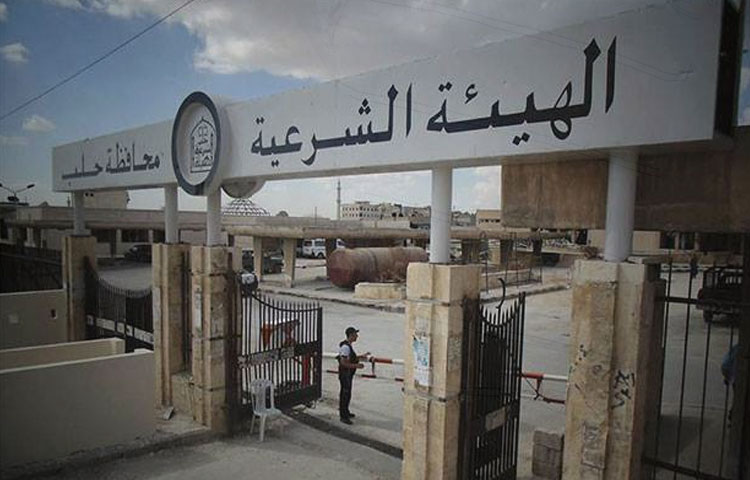 In the start of the armed conflict, opposition armed brigades and factions formed the so called ‘Sharia Boards.’ Initially these boards were arbitration committees for resolving conflicts between factions. They quickly turned into stable courts in which the ‘sheikh’ arbitrates cases of crimes and property instead of a judge.

Usama Abu Zaid, a legalist, told Enab Baladi that the deterioration in function of the judicial system post revolution started when sharia judges were appointed. Those sharia judges did not have the qualifications to even implement sharia let alone adjudicate. Sharia scholars were thus appointed to these positions and traditional judges and lawyers were excluded.

In general terms, the alternative judges in liberated areas lack the required experience to practice law.

‘In order to become a qualified judge, you have to study law for four years then continue study in the/a judiciary institute. If you achieve a significant success in the institute, you may be appointed as an assistant in a magistrate court and after that you start to get promoted. This means that studying the law for six years does not qualify anyone to judge felony cases,’ said Abu Zaid. In a bid to improve the situation and gain legitimacy, the Sharia Boards sent would-be judges on training course for the duration of a month or 45 days. After which, they were appointed as judges in the Sharia Boards. Legalist considered this a crime in the right of the law.

The alternative Sharia Boards fall into two categories. The first category is those which did not arbitrate in crime and felony cases. These type of Sharia Boards sought to resolve conflicts through consensus. They did not have the executive power to pass judgment among contestant factions. They passed judgments in civil matters such as marriage, divorce, trade, livelihood and inheritance as a way of replacing the vacuum created by the evacuation of state institutions.

When problems emerge between contested factions, these bodies resort to an outside body to pass judgment. The Sharia Boards in this category resemble a committee constituted of consensually appointed lawyers. Therefore, this category of Sharia Boards can be called ‘emergency courts’ or ‘emergency judiciary’. According to the testimony of a legalist, Chairman of International Union for Muslim scholars, Yusuf al-Qardawi advised the use of these courts.

The second category of Sharia Boards has courts with executive power. These pass judgments in felony cases. However, these are considered illegitimate courts both by Syrian state ‘law’ and Sharia law. According to Syrian state law, these bodies are illegitimate in executing verdicts and appointing judges. Likewise, the Sharia states that prescribed penalties cannot be executed in times of instabilities and in times of absence of a ruler. For instance, the Sharia prescribed penalties in times of instabilities are transformed judicially into discretionary punishments.

Many Syrian lawyers and judges consider the Sharia Boards to be a violation of the principle of the segregation of powers which the Syrian revolution called for. It was the most important demand protestors made other than legal reformations. In contrast, Sharia Boards violated the independence of the judiciary system by enabling the persistence of dictatorship in the form of the hegemony of armed factions over the judiciary.

According to legal observers inside Syria, some factions had to establish these courts to fill the vacuum created following the withdrawal of the regime from parts of Syria. As such, most probably, creating the courts was not a bid to gain power.

Also, these boards are considered necessity courts according to lawyer Abdul Naser Hushan.

Many blame the Syrian Coalition for not filling in the vacuum created in the wake of the regime withdrawal. Armed personnel agree with legalists concerning the work of the Sharia Boards. TAJAMU FASTAQM KAMA AMART (Formed in December from nine units in Aleppo province)’s group leader, Abu Qutaybah told Enab Baladi, ‘Military personnel’s hegemony over judiciary is one of the natural outcomes in times of war and instabilities. The segregation of powers principle cannot be attained until the revolution ends. Also, it should be taken under consideration that many brigades had to control the judiciary because there is no political or legal party to occupy it. It was neither for influence nor authority.’

The Absence of ‘state’ Concept and Multi-judicial References

Legalists and lawyers told Enab Baladi that the Sharia Boards’ courts are illegitimate because they have to derive their legitimacy from the state and the ruler. Judicial power is the sole authority responsible for appointing judges. It also provides protection for state and judge and the court’s decision in the presence of the state. Opposition brigades do not have the legitimacy to establish courts and appoint judges. According to Syrian state law, the establishment of alternative courts is considered war crimes.

‘If the Sharia scholars found it urgent to establish these courts to fill the void which could be filled by the power of arms, these courts’ function should be limited to civil cases, and to pass consensual judgments. However, when it comes to issuing verdicts like implementing prescribed penalties instead of discretionary punishments is neither acceptable in Sharia nor in the law’, a legalist who did not want his name disclosed for security reasons told Enab Baladi.

According to the legalist above, it was possible for these courts to draw their legitimacy from the Syrian Coalition. On the basis that the Coalition holds a revolutionary legitimacy and is representative of Syrians since 120 countries have recognized it as a representative political body. The shortcomings of the Coalition prevented it becoming a successful legitimate reference.

On the other hand, the most dangerous negativity of the Sharia Boards is the duplicity of the judgments/verdicts issued. The judgements lack a consistent legal reference. Every court issues verdicts derived from Islamic Sharia; however, every judge does that according to his judicial discretion, and his interpretation and understanding of texts in Quran and Sunnah. Two different verdicts might be issued for one accused in the same city and even perhaps in the same district. In most cases, the two verdicts would be contradictive because the judges are personally involved in vexatious acts. According to lawyers inside Syria, there were extreme cases where in the same court verdicts for one accused were contradictory.

Another negative aspect of these courts is chasing after citizens to do their daily duties and holding them accountable. In contrast, these courts do not chase after criminals and thugs. For instance, they would not hold a brigade commander accountable for his actions. This status of judiciary system embodies the concept of holding the weak accountable and overlooking the powerful.

Nonetheless, legalist and lawyer, Abdul Naser Hushan admits the good of the Sharia Boards in controlling 80 percent of Syrian land. They ruled the territory with a reverence to the judiciary rather military power. In particular, Sharia Boards were formed by multiple brigades and that kept it from being dominated by a single powerful brigade. In this case, the Sharia board balanced the power of other courts which were formed by one powerful brigade in the area. The Sharia board served as a deterrent to the dominance of the other courts. In this way, the Sharia Boards achieved a certain independence. Their independence enabled them to try military leaders. Moreover, there were cases where detainees were forcefully extracted from brigades’ prisons to the point where arms were used at times. There were cases were persons involved in coercively detaining others or involved in the torture of detainees were brought to trial. The Sharia boards held all of those legally accountable.