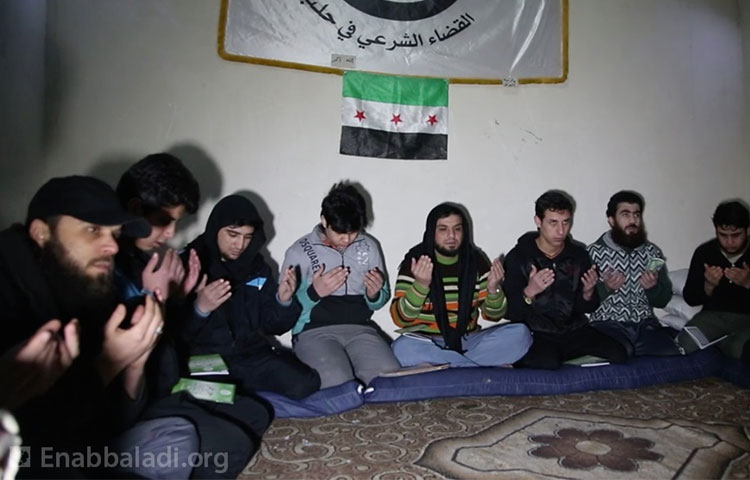 The Sharia judiciary in Aleppo implements a rehabilitation program for prisoners through which they supervise all the prisoners with the aim of raising their awareness and rehabilitating them. Judge Mudar Radwan, the head of the appeals’ court, spoke to Enab Baladi about this experience explaining, “This program includes all prisoners without exception, and the importance of supervision increases for prisoners with severe sentences.”

The rehabilitation program began around a year ago under the supervision of Sheikh Hazem Abu al-Juwd with the aim according to Judge Radwan of “Rehabilitation… the aim of the sentence is to deter, rehabilitate the soul, and work with criminals for them to become good persons in the future.”

A group of students of knowledge and proselytizing oversee the rehabilitation program. Radwan explained that in the Sharia judiciary there is “a group of overseers/supervisors, each of whom have specialized in a program in the Quran, al-Fiqah, and al-Hadith. They seek to demonstrate to the prisoners what their crimes are, clarify why the crime is sinful/haram, and explain the punishment that Allah has specified for the crime.”

The program also includes an appraisal for prisoners’ behaviour and the appraisal affects the prison sentence. Judge Radwan clarifies, “There are those who offer knowledge of the Quran and morality to change the behaviour of the criminal. The prisoners testify on the criminal if his behaviour has changed. If so, the sentence is reduced.”

The prison administration gives the opportunity for prisoners to learn. Courses are given for those who are illiterate and future plans are drawn to teach them a profession or craft. The prison administration seeks to implement these plans if there is sufficient resources according to Judge Radwan. He continues, “prisoners are entitled to an hour or two hours of leisurely activities. The prison has a sports hall that has a Ping Pong table and a Billiards table. The leisure time is a reward for those who commit to their classes.”

Judge Radwan confirms towards the end of the conversation that the idea of rehabilitating prisoners was one of the cornerstones of the ideas of court judges. They see it as a successful idea because the only way to limit crime is through increasing awareness and culture.