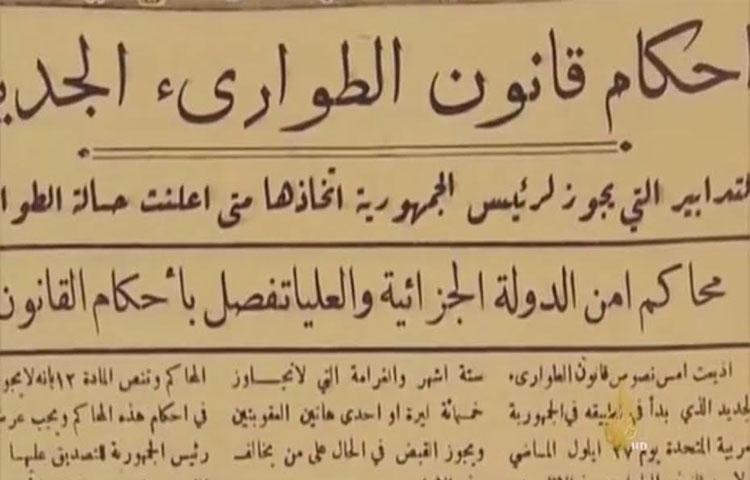 The Arab Baath Socialist Party took power in Syria through a coup in 1963. As soon as the military officers who enacted the coup assumed power, they issued a military order implementing a state of emergency and martial provisions. Syria lived under these for decades.

Hafez al-Assad led another coup over his comrades from the Baath Party in 1973. It was the last military coup in Syrian history. Following the coup, Hafez al-Assad held sole and exclusive took power over Syria. He drafted a constitution that gave him unprecedented power and control on the three pillars of the state: the executive, legislative and judicial authorities. This unprecedented power held by Assad enabled him to issue exceptional laws which changed Syria for decades.

Assad was not satisfied with only inaugurating himself as the Chief Commander of the military and armed forces as well as holding the position of Secretary General of the Baath Socialist Party. He also proclaimed himself as the head of the Supreme Judicial Council and dominated the Constitutional Court for years to distance himself from any legal accountability. Hence, the Constitutional Court stopped functioning for years although its function in any country in the world is the utmost proof of an active justice system.

Simultaneously, Assad established exceptional security and military courts. These were responsible for the tens of thousands of civilians who went missing and were tortured without a trial. It should be indicated that military field courts were called ‘sleeping courts’ which means that these courts do not function unless in a state of war. The Syrian state has not declared a state of war (as of yet) for those courts’ functions to be legal and permissible.

When Bashar al-Assad took power, he inherited from his father a security state ruled by emergency law in which security officers are exempted from any legal accountability. The president holds all powers based on the constitution. Legalists like Haitham al-Maleh consider that an authority which introduces laws to protect itself from any legal accountability is a state that wants to commit crimes.

In February 2012, following the outbreak of the Syrian revolution, Bashar al-Assad drafted a new constitution for Syria. In this constitution, he cancelled the provision that states that the Baath Party is the head of the state and society. He lifted the state of emergency and replaced it with a provision for combating terrorism.

The 2012 constitution kept all absolute powers in the hands of the president and rendered him above the law and accountability. Contrary to protocol the lifting of the state of emergency did not lead to the country being handed over to a civil party. Syria stayed under the rule of the military and intelligence apparatus.