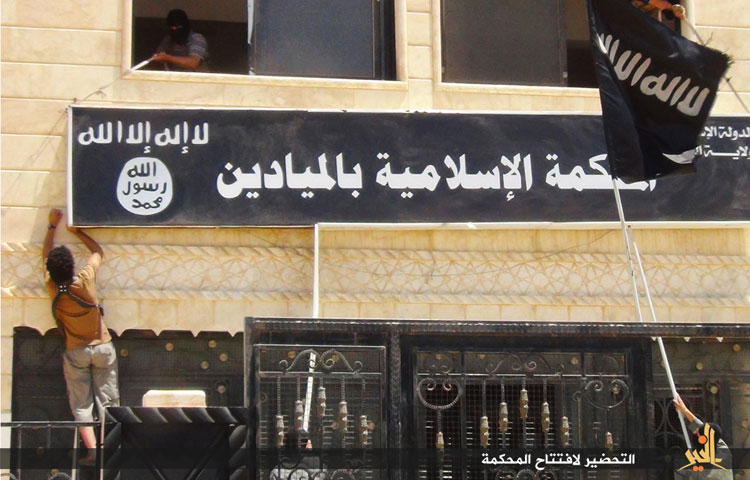 On the 18th of November 2012, Al Bukamal and its countryside were liberated from regime forces. The city was in total chaos because of the complete absence of functioning state institutions. This absence pushed people to found local council. Several Sheikhs and Sharia student established the ‘first Sharia board.’ The board coordinated with the local council. Their role was limited to resolving disputes and civil cases.

In that period, the armed factions present in Al Bukamal agreed to manage the board, and the factions did not intervene in the service aspects. Muhammed Khalif, member of the Syrian Network for Human Rights, confirms that until July 2013, the board’s role was limited to the judiciary.

In the middle of 2013, another agreement was accorded to form a new Sharia board that extends to include all armed factions in Al Bukamal and its countryside. The board included several registers such as courts’ register, reconciliation register, and real estate register. The board’s executive power was formed by Jaysh Allahu Akbar (Allah is Great Army) and al-Nusra Front. Later on, following al-Nusra Front’s monopolization and complete control over the Sharia board, the Sharia board in Al Bukamal controlled decision-making and was the Sharia sovereignty.

On the 11th of April 2014, ISIS launched an attack on the city of Al Bukamal. ISIS attacked the building of the Sharia board and released the prisoners. ISIS subsequently took complete control over the whole city on the 27th of June 2014.

The Sharia board in the Western countryside of Deir ez-Zor

The board was founded on the 9th October 2013 in al-Kharita town. It included a number of offices like complaints office and dispute office. Its executive power was formed by all factions. One of the characteristics of this board is that it held offenders from the Free Syrian Army accountable.

Most of the persons working in the board were jurisprudents with the exception of one member who was a lawyer. The board had a role in promoting fighting ISIS.

Central Sharia Board in Eastern Region

The central board was formed in mid-2013 and many factions joined it such as al-Nusra Front, Ahrar ash-Sham, Jaysh al-Islam, Jaysh Mueta (Army of Mueta), and several other brigades and battalions present in the region. It thus became the main power in the region and adopted the city of al-Mayadin in the eastern countryside of Deir ez-Zor as its central base.

Islamic Sharia was the only reference followed by the board. It was not affiliated with a specific faction or group. It consisted of independent individuals and some members who are affiliated with military groups, but only as scientific or military character. All the members are degree holders.

The central board played a big role in the region on all levels be it judiciary level, service level, or daawi. Thousands of people came to the board from Deir ez-Zor, Raqqa and Hasaka. The board opened its door for everyone and its offices were activated to run the region. However, when ISIS took control over Deir ez-Zor on the 5th of July 2014, the board’s role was terminated.

We used an unpublished study by Muhammed Khalif, member of Syrian Network for Human Rights.