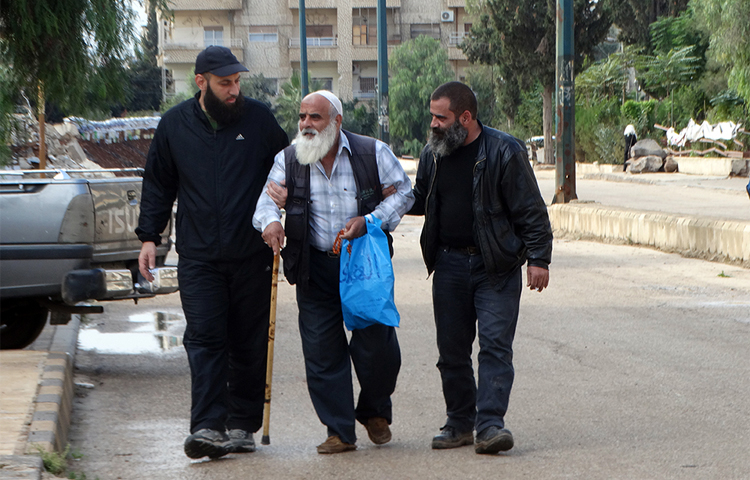 However, entering the second phase does not mean the humanitarian condition is better in al-Waer district as the Assad regime still hinders aid and food shipments in route to the district.

Civilians in the truce

Al-Talawi pointed out there is a significant shortage in food items like salt, spaghetti, oil, and flour. These are considered the scarcest materials which people need. He added that a food basket does not suffice a family for one month.

Al-Talawi called for, through Enab Baladi, support for collective kitchens inside the district since families lack money to buy things because of lack of resources and lack of jobs and the bad conditions of shelters. Humanitarian aid has to be delivered on regular basis, he confirmed.

Shelters need extensive reformations according to al-Talawi. He explained that humanitarian aid includes neither covers nor insulators. Food baskets do not contain baby milk, diapers, and sterilizing materials.

Regime forces and rebels formed a mutual negotiation committee and met on 6 January. The committee evaluated the first phase and agreed to move forward with the implementation of the second phase of the truce.

The two sides agreed on the following conditions: reactivation of public facilities and equipping them, return of the displaced families to their district, permitting entrance of humanitarian aid on regular basis, and allowing entrance of gas and oil into Waer.

The second phase also includes: releasing all detainees since the outbreak of the rebellion in the district, releasing detainees at the security committee in exchange, rebels relinquish their medium-sized and heavy weapons.

The weapons will be collected in ‘al-Bir Hospital’ and the mutual negotiation committee will supervise the collection process according to previous information obtained by Enab Baladi.

Activists said it was more like ‘field execution’. Activists published a video recording showing red crescent members pulling the fighters and they were unarmed.

Syrian Popular committee in the district claimed they stopped an infiltration operation of suicide bombers. Activists said Syrian Popular Committee performed the operation to foil the evaluation meeting and truce in general.

The aforementioned incident was not the first breach to the truce. It was preceded by ten other breaches.

The breaches include: detaining one member in negotiation committee, using the district’s front to shell opposition areas like the northern countryside, killing several civilians by snipers and hindering entrance of basic materials like medication and salt.

Opposition forces attributed the breaches to the pro-regime forces rebelling on the regime.

Assad regime closed al-Muhandiseen checkpoint (the cross point which connects al-Waer district to the rest of Homs) ‘to keep civilians from abduction and detention.’ This is considered a breach to the truce and the breaches of regime and pro-regime forces might cause collapse of truce.

Al-Waer district suffers from extreme shortage in basic needs. 30 thousand tons of garbage was supposed to be moved from the district; however, this was not implemented according to activists in the district.