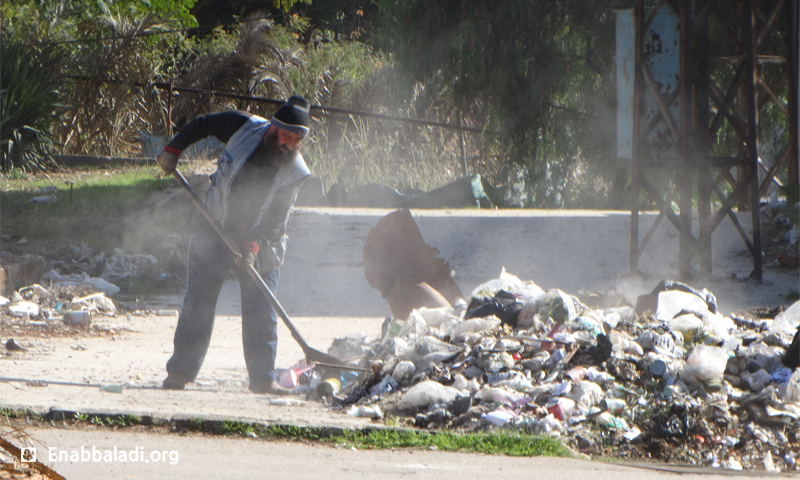 With the summer season at the door, the residents of the besieged neighborhood of Al Waer in Homs face real suffering amid the dramatic spread of garbage in the streets, which was estimated at 60 thousand square meters, divided among the civilians’ houses, the thing that threatens with a humanitarian disaster.

The only solution for the garbage spread that the people of the neighborhood found was to burn them in front of their houses. According to Doctor Ali Jumaa, who works at the field hospital in the neighborhood, this solution threatens with a health disaster as well as respiratory system diseases.

Jumaa tells Enab Baladi that he has recently received many respiratory cases, noting that the high temperatures “increase in turn the insects that bring along dangerous dermatology diseases such as Leishmania, especially with the absence of pesticides in the neighborhood.”

The threat that the residents of the neighborhood face did not end at that point, doctors would not exclude Valsalmonilla, which is limitedly spread, off the list of expected diseases in case the siege over the city continued, as Jumaa says. He also explained that diseases “will increase in light of the graduate lack of food and the absence of cure.”

According to Abdel Salam Souid, director of the local council service office in the city of Homs, the regime refused to remove garbage out of Al Waer neighborhood considering it an effective way to pressure the civilians, whose population is estimated at a 100 thousand.

The service office estimated the amounts of garbage spread in the neighborhood at 60 thousand meter square, distributed among 160 streets. In his interview with Enab Baladi, Abdel Salam justifies the reasons behind burning down the garbage to its daily increase.

Souid explains the office has moved part of the garbage to an area in the northern part of the neighborhood, referring to difficulties that faced the working staff “due to the huge amounts.”

Souid says; the agreement’s items reached between the two conflicting parties state that garbage is to be moved out of the neighborhood, yet the regime did not comply with the agreement. He also says; “we have received many promises to move the garbage, but the negotiation committee confirmed to the service office that they did not get a security approval of implementation, which places the residents of the neighborhood at a risk of diseases.”

The residents of Al Waer are distressed

The residents of the neighborhood complain of the increasing amount of garbage in the streets and they fear of “dangerous” diseases that children may get infected with, which is something agreed on by all those who Enab Baladi has met with.

One of the residents of Al Waer, Yasser Mohammad, considers that the garbage spread “has locked us up inside our houses because we were afraid of diseases and insects”, adding that, “the attempt to find solutions to get the residents out of their fear were insufficient, not to mention they were completely useless.”

The truce in Al Waer, which is the last opposition strongholds in Homs, was concluded early last December under the auspices of the UN. The truce witnessed many violations, most notably were the killing of two members of the opposition, the arrest of the member of the negotiation committee in the first phase and the regime’s refusal to free the detainees in the second stage.

A series of sieges alternated over the Homsi neighborhood (that in Homs) since the recent suspension of the truce, as the regime did not commit to the items of the truce and prevented flour to get to the neighborhood, what forced the residents to replace flour with rice co-occurring with the absence of baby milk.

The residents of Al Waer believe that moving the garbage inside the neighborhood is “just like moving a body from one tomb to another.” At the end of his interview with Enab Baladi, Almohammad says; “if the appointed authorities in the neighborhood are incapable of moving the garbage out of it, then we have to bury and get rid of it in order to feel like human beings.”