Abdul Khaleq Shamiya: A senior in his 80s runs a Bookshop in Aleppo 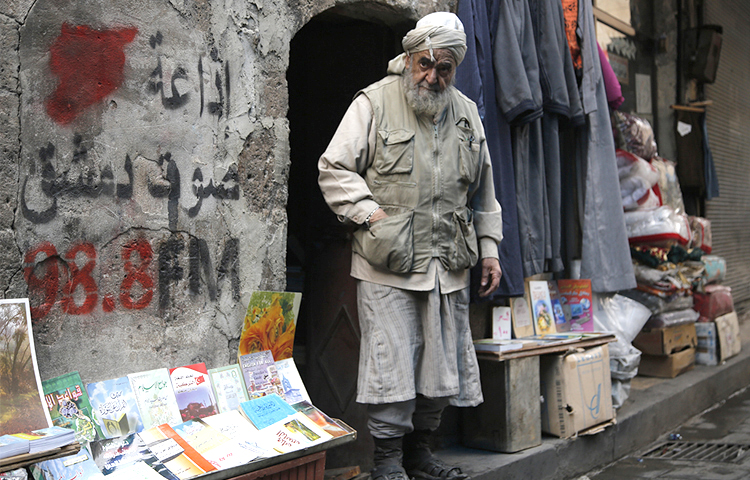 New beginnings usually carry hope in a different future. We share this hope on a collective human level as for instance people are more optimistic in the first days of the week that the week will improve and they wish for better things to come.

Abdul Khaleq went through many difficulties, but it did not stop him from following his profession of selling books which he started working in from the age of 17. He recently opened a bookshop in one of Aleppo’s old neighborhoods.

Shamiya, a man of 80 years, did not lose hope after the death of his wife in the bombing of the Judicial Palace close to his house. He starts his day at 9 am in the bookshop where he greets many visitors until three and a half in the afternoon. He sells books during the day and he acquires books that are not available in his bookshop by asking about them in other bookshops in the different parts of Aleppo.

He opened the bookshop 9 months ago in Khan Al-Wazir neighborhood. It included books that people offered to Shamiya and books which he owned. Speaking to Enab Baladi, he said he is prepared to enrich his bookshop which already includes around a thousand books further. Shamiya receives about 4 or 5 visitors per day which he considers, “little, but good.”

The book prices vary based on the age and scientific value of the book, according to Shamiya. He pointed out that the bookshop contains books that are worth 100 and 500 Syrian lira and some go as high as 5 thousand Syrian lira. He reiterated, “Sometimes, I sell the book in installments, and I reduce the price for some of my customers.”

Shamiya says he owns a copy of the book “Al-l’tisam” (The demonstration). The copy is valuable as it was published during the time of Khedavi Ismail, the grandfather of King Farouk. He recounted, “I prefer historical books, and of them the beginning and the end for Ibn Khathir, the history of the Khoulafa, because it is pleasurable and it makes you experience the events as if you are taking part.”

Shamiya considers that, “Reasonable people are few in the current time,” reiterating, “I love books and reading, and I chose this route because it is a service to scholarship, scholars, and people.”

Towards the end of the conversation, Shamiya said that he memorized in his youth a poem that included the following line, “I am a youth with culture, I read the best of books. If company is absent, then books are my company.” He indicated that Aleppo city is famous in its production of knowledge since times long past, “Aleppo used to include an area called ‘Al-warakat’ (the papers) that is now Finkik Al-Amir. Also Al-Faradous University used to teach students Hanifi Fiqah, and people from Al-Andalous would come to it.”

Enab Baladi met with Khalifa Al-Khedir, a university student from Aleppo, and he said that the bookshops in the liberated neighborhoods lack diversity as literary books and novels are absent. Religious books are more readily available as a result of the influence of the brigades which want to promote this culture.

Al-Khedir considered that culture, “is important to create a balance in human’s lives,” indicating that Shamiya’s bookshop, “despite its age is wonderful.” He promptly bought a book entitled, “The art of Drama.” He expressed his wish for the culture of reading to spread as, “the liberation of Syria and its opening up begins with opening a book.”

Shamiya returns every day after finishing his work in the bookshop to read a book of his choice until the early morning hours. He reads alone on the light of candles. He lives alone after his 11 children left the country, “due to the worsening economic and security situation” according to his description.