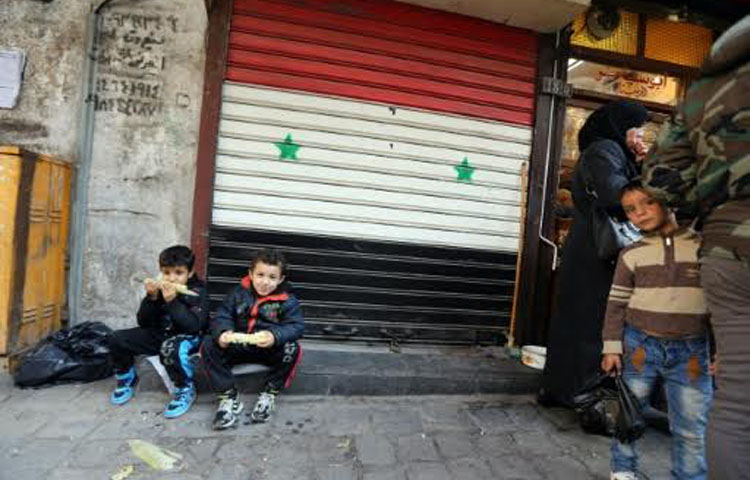 Assad forces and his security apparatus started on the 20th of November, without a prior official notice, a campaign campaign against young men who did not enroll or delayed enrollment in compulsory military service on time. Simultaneously, the Syrian regime started another campaign to support the army lines through summoning 70 thousands soldiers in reserve army in the areas and regions under its control.

Young men born between 1972 and 1992 (the age to enroll in reserve army) disappeared from streets and public places for fear of getting noticed by patrols searching for them in order to take them to the army. The regime tightened its security control in an unprecedented way especially on security checkpoints, public places and entrance points to cities and neighborhoods.

It became a nightmare for young men and this forced them to choose between two options:

One is to stay home and not go out unless for emergencies. The second is to immigrate.

Munir, 31, said “the situation is very difficult,” and summoning him to reserve army is “a catastrophe” he did not expect. He is an employee in company in the private sector. He earns good money and he sponsors a family of 5 people. He is now at home waiting to get his passport issued to leave to Turkey.

“I have to change my residence every day and I move from one place to another. Security storming is very intense here. Regime forces need every single soldier and employee to support the fronts,” Munir says.

He pointed out that he does not want to participate in the conflict with any party, “arms are have caused the destruction of Syria and destruction of its infrastructure.”

Opinions and Warnings on Social Media

Regime campaign against wanted and late young men to military service caused a lot of traffic on social media. Opinions differed between a supporter to the campaign, those are supporters of the regime, and other voices denouncing the campaign .

Some voices said the reason why the regime has launched this campaign is the lack of numbers in the regime forces and the unsuccessful Iranian and Russian air support. In addition to the failures of the sectarian militias on the ground.

Other people mocked the regime’s campaign stating that it will not give the results expected or needed.

Activists in Damascus and Damascus countryside warned young men of patrols’ locations so they do not get caught by security forces.

“there is a checkpoint for Air Force Intelligence on the fourth bridge on the road to Damascus International Airport. The checkpoint is detaining young me who are at the age of service and who wants to travel,” Someone writes.

Another writes, “attention! Hayat hospital’s checkpoint is inspecting young men carefully. There is a big campaign to draw to reserve army.”

A woman wrote mockingly about the long period a soldier spends serving in the regime. Since 5 years, no single soldier has been discharged from the service.

A young man uploads a photograph of a person dressed as a woman walking down the street to delude the regime patrols that he is a woman to avoid detention and eventually get taken to the service.

since the outbreak of the Syrian revolution, the Syrian regime led by Bashar al-Assad has tried to win military personnel over especially those in reserve army in addition to workers in public sectors.

The Syrian regime attracted them by giving extra wages and incentives. Later on, Assad issued the decree number 38 in 2015. The decree related to military service is to implement the second and third article from 74 section. It is to be enforced on all workers starting15 of march 2011.

According to the 2 and 3 article, workers in public sector whether permanent or temporary and who are summoned to enroll in the reserve service will be awarded a full paid leave during their service. Also, they will keep the right to raises and other advantages.

The decree allowed workers to earn all compensations. Furthermore, the workers will be returned to their jobs in private or public sector after completing the service on the condition they put themselves under the command of authorities during 15 days from their discharge.

Pro-regime Media promoted the campaign by broadcasting the huge numbers of young men joining the regime forces in Damascus Countryside. Also, it published legal texts stating the penalties for those who abstain from enrolling in the reserve army.

A pro-regime newspaper explained on Facebook the details of the summoning process, the way it is implemented, and the group it targets. Summoning for the reserve army is made in accordance with the need of military units. The need arose from the lack of numbers of soldiers due to death or injury.

young men in regime-controlled areas do not acknowledge this legality and do not care about media’s aura whether they are supportive or in opposition of the regime. Their only choice to escape fighting in the regime army is immigration. The more the conflict lingers, the less survivors and more violence to come.

Syrian regime went too far in chasing the ones escaping his violence. Bashar told the Czech TV on 30 November, “there are terrorists among the Syrian refugees in Europe.”

A Syrian young man responds, “we left him and he did not leave us alone. We hope to get rid of him soon.”