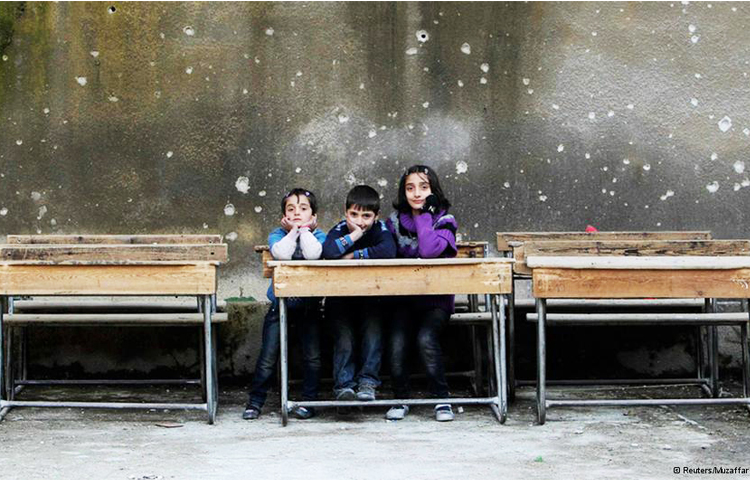 Most Syrian children did not experience the usual state of anticipation and anguish this end of school semester, which has been missing for two or three years in a row, maybe even longer.

Meanwhile, Syria’s children are worriedly anticipating barrels of explosive that may fell at the sky at any moment. Others area awaiting an opportunity for education in refugee camps. Some are incapable of tolerating the high expenses of education in the countries of refuge, or are lost in a spiral of chaos of accepting Syrian refugee children into schools or acknowledging their previous school diplomas.

This new “wave of illiteracy” is blamed upon a multitude of factors, primarily the unsafe environment, lack of stability and the destruction of educational facilities. Therefore, all of these factors together had a negative effect on the quality of education; furthermore, fees of education are an added financial burden on refugees’ income that has exhausted Syrian children as the war have turned them into family’s breadwinner.

These schools have closed down after “Assad’s” artillery turned its classrooms into a rubble that is disqualified of continuing to function and practically impossible to be restored.

The Syrian curriculum and Syrian diplomas, once among the strongest of its Arab counterparts, has lost much of its value as of 2 years into the conflict, as the quality of education has deteriorated and security disturbances allowed the spread of forgery, making the authenticity of some Syrian diplomas questionable, threatening the future of children and young adults who are being stripped of their rights of self actualization and prosperity.

4000 Syrian schools have been damaged, destroyed or used as shelters.

2.2 million children inside Syria are deprived of education.

Half a million Syrian refugee children are deprived of education.

30% of Syrian children in the school-age are currently in the education system, compared to 97% of them in 2010.

* Statistics from a United Nations “UN” report in November of 2013.