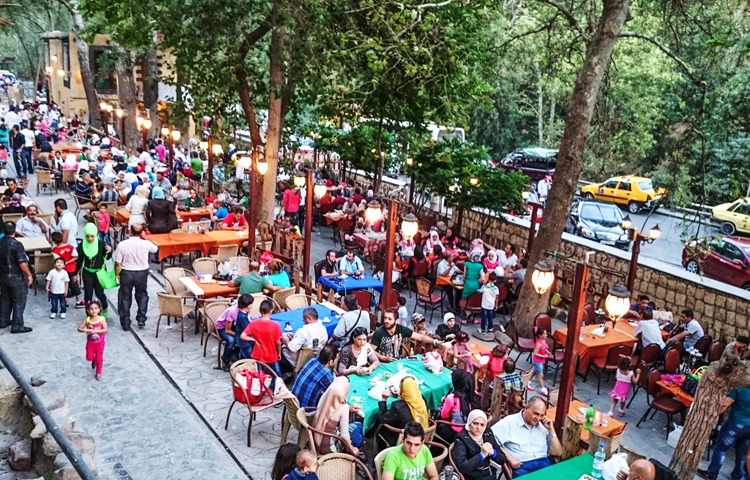 During holidays and vacations, Damascenes were accustomed to –and thus know for- spend their time in open air amidst nature in the suburbs, especially during Summer, as temperatures rise and the city becomes more crowded, polluted and loud. Residents of Damascus used to head to the surrounding countryside and the Eastern and Western Ghouta, Suburbs of Damascus, or to other Syrian provinces, seeking tranquility, peace and fresh air.

To another province.. Not an Option!

Ever since recent events broke out, this custom no longer existed, making “picnics” and “Summer outings” nothing more than nostalgic memories in the minds of Damascenes.

In the light of the ongoing clashes between regime forces and opposition forces across most of the Syrian land, and the difficulty of transportation due to widespread checkpoints, and the lack of security, in addition to the rising prices of fuel, all are factors making the idea of travel between Syrian province nothing but an act of madness.

As for nearby areas and parks that were frequently attended by Damascenes, including the parks of Hameh, Fijeh and Zabadani (to the west of Damascus), are all currently witnessing unsettling battles. In regards to the parks and rest-areas of Qalamoon, they have either been completely destroyed; like the well-known Taibah rest-area located on the highway between Damascus and Homs, or have closed down completely as a result of conflict and ongoing war.

Lung of Damascus Swallowed by Flames,

Ghouta, the lung of Syria as a whole and of Damascus in particular, has been swallowed by flames, it has been transformed into a relentless war zone after clashes found their way into it, filling it with checkpoints that made Ghouta appear in the form of isolated masses of concrete. This has tightened the grip around Damascus’s neck and made Rabweh the destination of choice for recreation and picnics, Ain that regard, taking the place of Ghouta.

Rabweh is known for its refreshing climate as the Barada river runs through it. Barada originates close to Al-Zabadani and runs to reach Damascus in 7 distributary channels.

In addition to the beauty of Rabweh’s nature and its proximity to the capital’s city center، and despite being neglected, highly unattended-for and being transformed into shops and commercial cafeterias, in addition to the river becoming a dump for the waste of people, restaurants and cafes, it still attracts a large crowd, that increases at mid-day and on holidays. This particularly high turnout for Rabweh made it the successor of Ghouta even though it does not measure up to its beauty nor exceeds it.

Abu Ahmad, who has become used to visiting Rabwah with his family on weekly basis, wonders “what other place could we possibly go it?”

The relaunching of the “Dummar – Rabweh – Umayyad Square” Train on May, 1st after being out of service since 2010, sparked controversy amongst Syrians, who ranged between being in-favor of the relaunching and being opposed to it, while others found it sarcastic. This step, according to local officials, aimed to restore hope among the people of Damascus. But, in reality, it has had various echoes amongst Syrians.

Zuhair Khalil, the president of the construction department at the “Hijaz” Railway Association, stated during a talk to Assafir Newspaper; published on May, 2nd 2015; “We decided to reopen the railway in an attempt to restore hope and joy among Damascenes, as it is one of the main arteries of the city.”

Many citizens have tried taking the train and were delighted by the experience, as they did not view it as a step-back, but rather a return to tradition and a reminder of the wealthier days of the past.

Sarah and her friends took the train after a day at college and headed towards Rabweh, she described her experience to Enab Baladi as being “One of the best days of my life”. The Syrian Facebook page “Memoirs Of a Mortar Shell” published the news of the relaunching of the train, and Syrians had various comments to share.

Yamama said; “We felt as if a sense of liveliness came back to Damascus when we took the train”, whereas others thought that this train is nothing but “an act of fooling people” and an attempt to sugarcoat death, as they wondered “are we simply going to forget about our destroyed houses and find joy in a silly train?”.

Wissam Hajjar comments sarcastically; “when should we expect the return of donkeys, mules and hinnies on the streets?”; Dania Ajlouni also adds “before you know it they will make our TV’s black and white again.”, Inas Karam wonders; “does the train rail have a military row?” [A military row is a special passage for military and high ranking regime-affiliated personnel on checkpoints in Syria, granting them to pass without being checked].

On the other hand, Nabil Karam considered the train to be a “beautiful folklore”. “It’s nice to see this scene after so long, I wish the days of carriages would also return”, said Karam, yet pointing out that the prices of tickets “are not enough to cover the expenses of the coal used to run the trains”, as a tickets is sold for 50 SYP (16 cents).

Although this train has become a source of controversy to the level of dispute amongst Damascenes, its return to service has urged many, driven by nostalgia, curiosity or even out of sarcasm to give it a try and make a trip to visit Rabweh, this has contributed to refreshing tourism in that area.

The train’s route stretches on the remnants of the “Hijaz” railway, which used to connect Damascus and Al-Madinah Al-Munawwarah early in the past century, but many of its parts were destroyed and damaged during World War I.

Prior to the onset of the Syrian Revolution, train trips used to begin at the “Kadam” Station, south of Damascus, towards the “Hijaz” station, passing through “Dummar” and “Al-Hameh” and then across the most renowned summer resorts of Ghouta; “Ein Al-Khadra” and “Ein Al-Fijeh”, to eventually reach its final destination “Serghaya”.

These train rides were popular among the inhabitants of Damascus and its countryside, regardless of their social status, also appealing to tourists equally at the time. The beautiful scene of the train’s journey was created by the hands of children that reached out of the windows waving, as dozens of hands greeted them back from surrounding rooftops.

In addition to serving the local inhabitants, it was used by tourists to visit the famous restaurants or popular “Terraces” that were available to the public to reserve and order food, or request tools for cooking or barbecue, in addition to the presence of playgrounds for children to enjoy. But the most prominent scene was always that of the watermelon placed in the cold spring to cool.

The train went out of service in 2010 due to technical issues that called for reconstructions of the railways and cabinets; the train remained out of service as the Syrian Revolution broke out. It remained closed until recently, when Hijaz Railway Association relaunched service under the name of “The Picnic Train”, which has a capacity of 100 passengers, and tickets costing 50 SYP each.

The train’s first journey took place on May, 1st of this year, but the “Picnic” Train’s route is limited to regime-controlled areas; with the start point located behind the “Sheraton” Hotel and Rabweh being the final destination, the train makes stops in “Dummar” and the outskirts of “Koudsaya”, and later follows the same route in reverse.