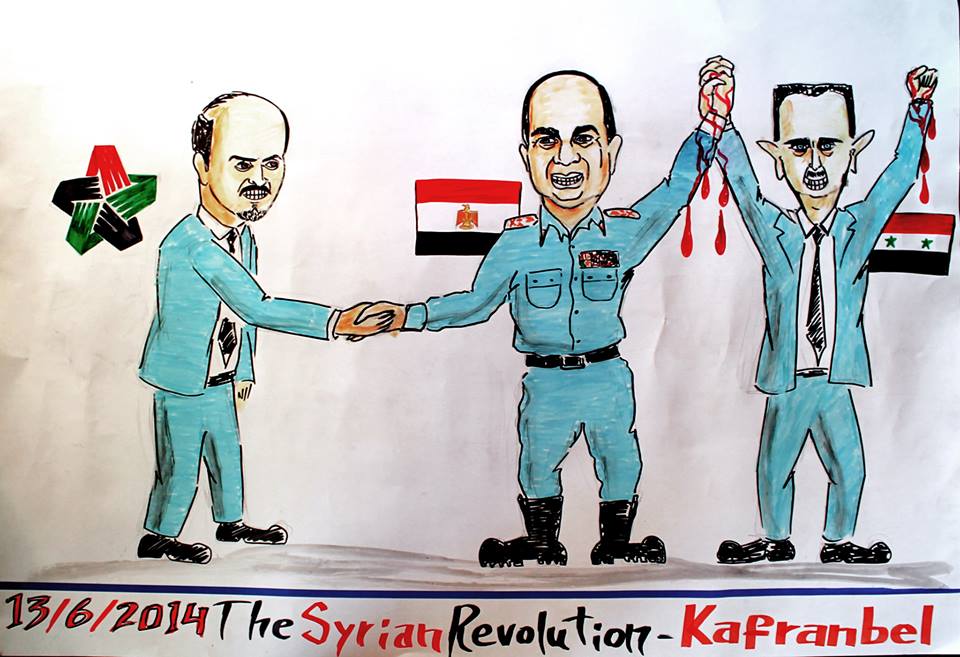 In an unexpected move, head of the Syrian National Coalition, Ahmad Al Jarba extended congratulations to the former minister of defense, colonel Abdul-Fattah Alsisi on winning of the presidential elections in Egypt.

Some people are arguing that Al Jarba was impelled by politics and was serving the interests of the Syrian opposition, unmindful that politics does not require congratulating a dictator who won the presidency with the power of arms, stamping on the democratically elected rule. Following Assad steps and adopting his methods –which Assad vowed to teach to dictators of world-, Alsisi deemed the opposition of the coupd’état “terrorists and saboteurs”, giving the army every right to detain or to execute them.

The decisions of the Syrian National Coalition reflect its complete separation from the reality, and expose its helpless position in the unscrupulous political game that swings the coalition back and forth to wherever the advantage of its allies, to the extent that it became clear Al Jarba is merely a pawn moved on Saudi Arabia’s chessboard where it moves the pieces to serve none but its own interests, regardless of the interests of the peoples of the Arab Spring uprisings.

Whereas the accumulation of stances taken based on the political tug of war in the region shows the wide gap between the opposition structure and the revolutionists in Syria, who stood up against violations of human rights, oppression and injustice against them by ruling regime and merchants of war.

The coalition could either assume a constructive role in Syria through seeking the legitimacy and the recognition of its people; or it could pursue its attempts to gain the satisfaction of other Arab and foreign states, which in turn will continue to exploit the coalition to serve its interest in the Middle East.

The “wise” politics of Al Jarba brought nothing but a five-year in a high-security prison sentence in absentia against 13 Syrians from the opposition, issued by the Criminal Court in Cairo only hours after the letter of congratulations…