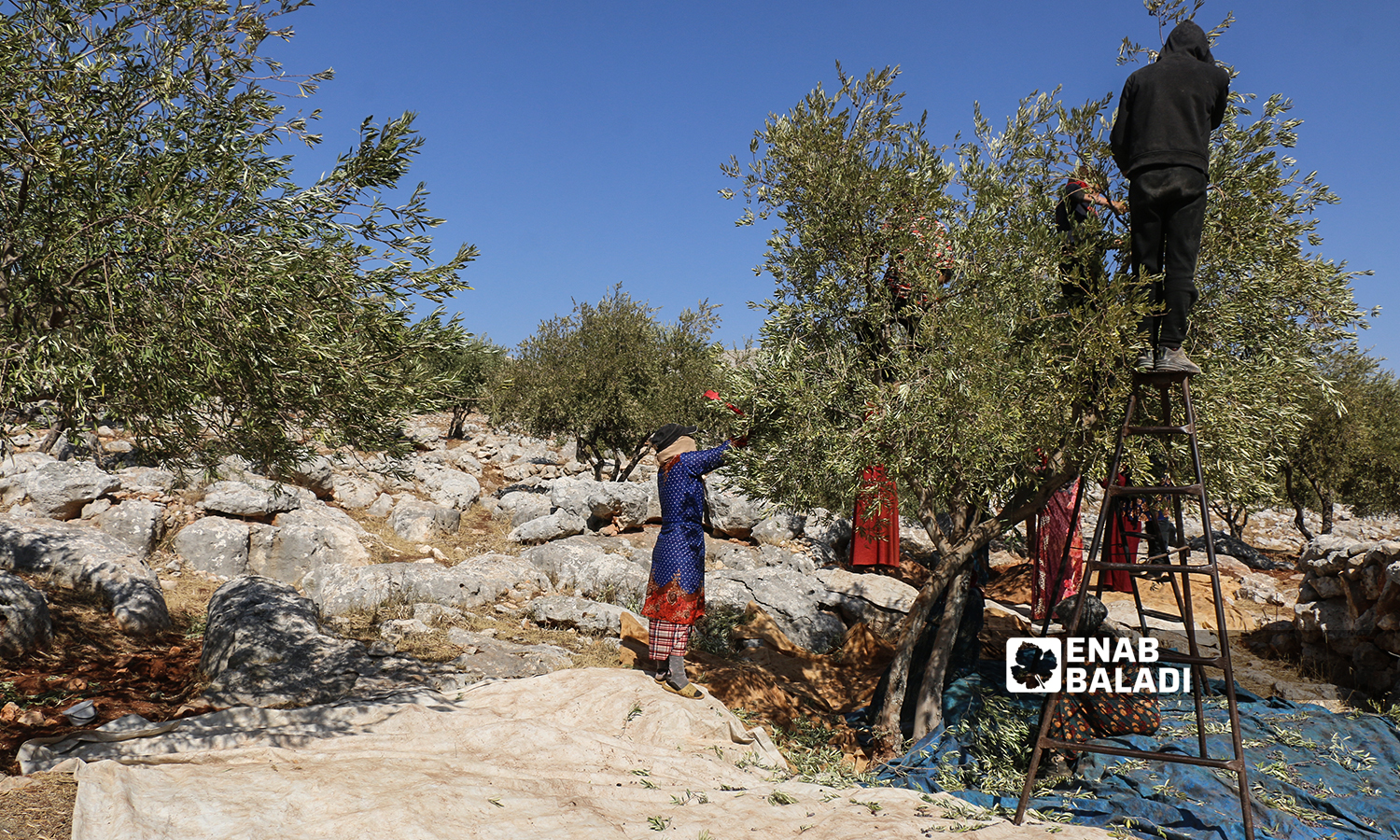 The olive harvest season in the southern countryside of Idlib has turned from a source of livelihood for the workers and the owner of the crop into a source of anxiety and fear amid the continued artillery shelling from the areas controlled by the Syrian regime and the Russian air raids on the area.

Unexploded munitions and remnants of war spread widely in agricultural areas close to the lines of contact with the regime forces and pose another threat to the lives of workers and peasants and threaten their lives.

The deteriorating living and economic conditions, the search for a family’s daily bread, the displacement conditions, and the advent of winter push the workers to work in the olive harvest under the threat of shells and on lands full of old and unexploded remnants.

Opposition-held areas in northwestern Syria are subjected to almost daily shelling and Russian air strikes at a varying frequency, and areas close to the contact lines receive the largest share of the targeting outcome.

The agricultural lands became in the crossfire of the regime forces and Russia, which made the workers who harvest crops in these areas vulnerable to death.

The olive harvest has been active since last September in northern Syria, and the olive tree is a source of livelihood for a large group of the region’s population, as the worker waits before the owner of the crop at the beginning of the harvest season to work and secure the livelihood of his day and his family.

Adib Ismail al-Khatib, responsible for a group of harvest workers, told Enab Baladi that the dangers of bombing, whether ground or air, have become a routine accustomed to workers who are forced to work in these conditions to secure their needs.

Al-Khatib, who transports the workers by vehicle to the lands, stated that if the agricultural land on which they work was targeted, they would hide in further lands, wait until the bombing subsides and return to work with double fear, but what awaits them from the responsibilities of securing the minimum needs of the family keeps them on the land.

The worker receives a daily wage of 40 Turkish liras for nine working hours, starting from seven in the morning and ending at four in the afternoon.

In the latest statistics obtained by Enab Baladi from the Syria Civil Defense, its teams responded to 13 Russian air attacks, which targeted vital installations, civilian homes, and agricultural fields, from the beginning of last August until 15 October.

These attacks resulted in the killing of seven civilians, including a child and stone saw workers, and the injury of 12 civilians.

According to the Civil Defense, Russian air attacks have not stopped in northwestern Syria during the last period, and the majority of the attacks were concentrated in the southern countryside of Idlib.

On 23 October, a woman was shot after the regime and Russian forces targeted a group of women working in olive picking in the al-Kanda area in the western countryside of Idlib, according to the Civil Defense.

The rescue agency pointed out that this systematic targeting prevents civilians from earning their livelihood with the start of the olive harvest season and undermines stability in several areas in rural Idlib.

The looming death is not limited to the current bombing and targeting by the regime and Russia, as thousands of unexploded ordnance from previous bombings are scattered in northwestern Syria.

From the beginning of 2022 until September, the Civil Defense teams destroyed 652 unexploded ordnance in northwestern Syria.

The Civil Defense (White Helmets) stated that intensive work is continuing to remove it during the olive harvest and end its danger to protect civilians.

Reaping any crop from agricultural lands in these areas is accompanied by instructions and warnings from local organizations about the necessity of being careful and alert for any foreign object in the ground.

The observatories specialized in monitoring military movements in the region are also working to issue warnings and instructions in the event of the presence or take-off of flights, whether reconnaissance or military operations, in the sky of the region. 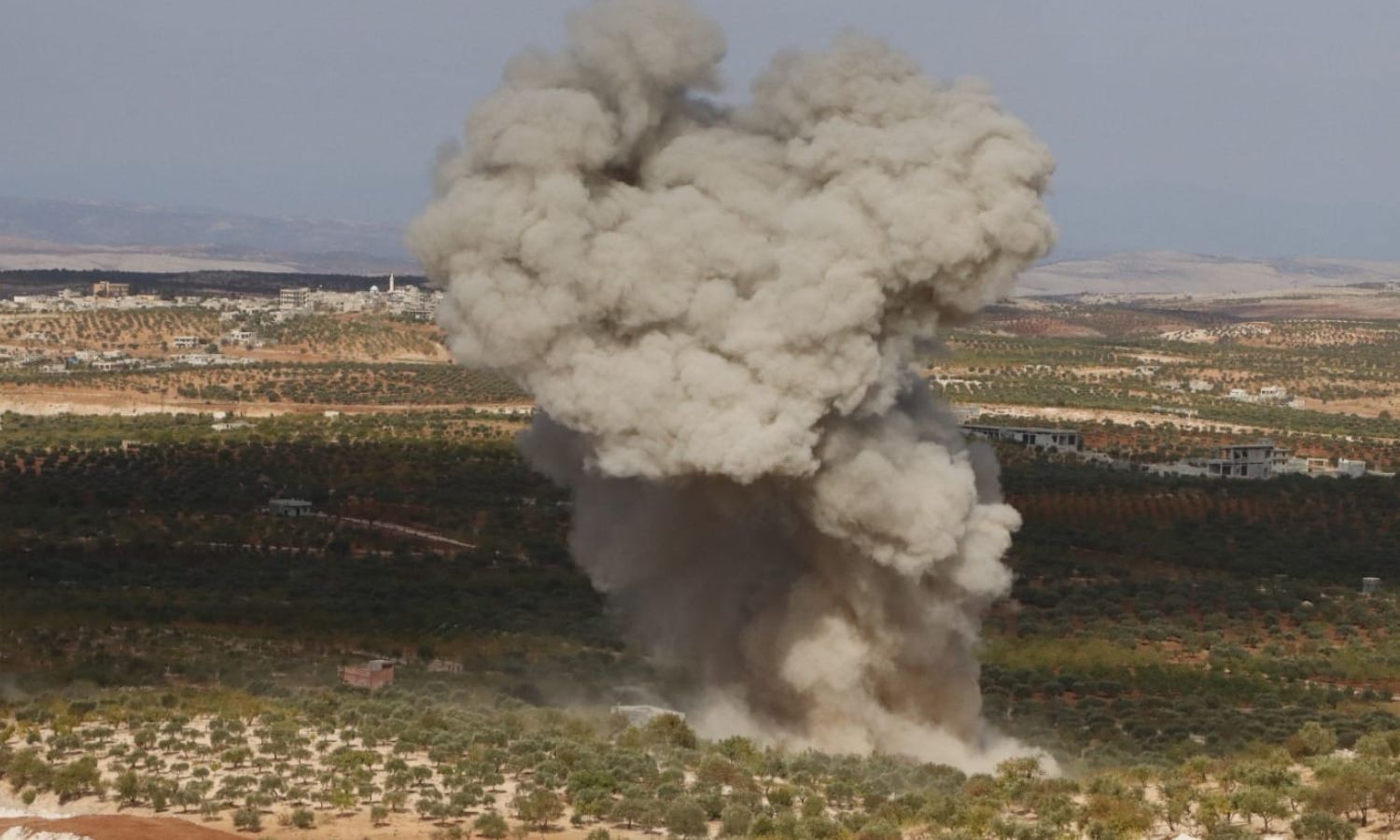 Dangers continue to haunt agricultural land workers near the frontlines, despite warnings and instructions and the cessation of military operations in the region after the Moscow agreement, or what is known as the ceasefire agreement, brokered by Turkey and Russia on 5 March 2020.

Most of the residents of northern Syria live in deteriorating living and economic conditions where 85% of families in northwestern Syria depend for their material income on daily wages, and 94% of families suffer from the inability to secure basic needs.