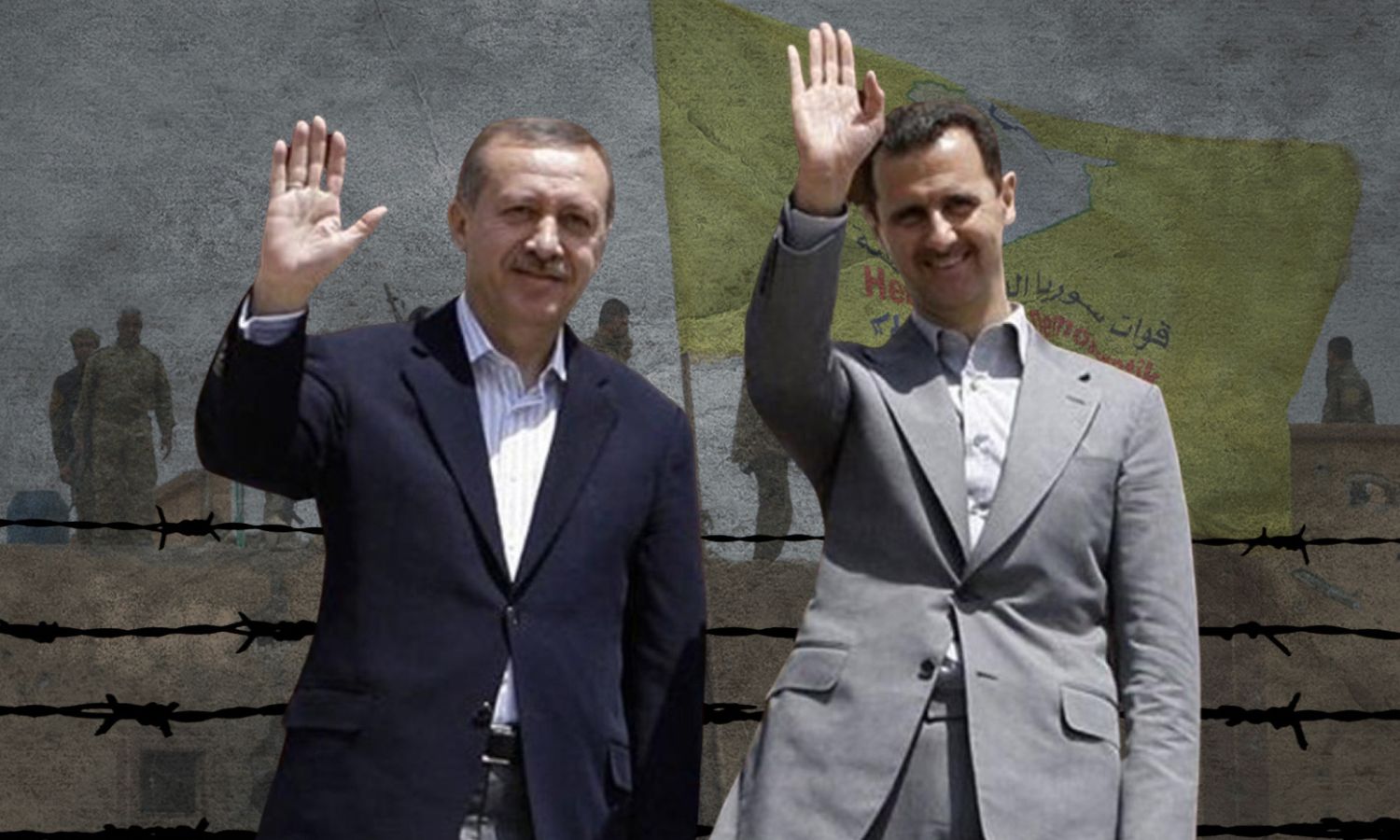 Statements on normalization between Turkey and the Syrian regime caused fears and a situation of political and military confusion with the controlling Autonomous Administration of North and East Syria (AANES) in northeastern Syria, months after a series of threats of a Turkish military operation in the region.

Despite expectations that reduce the chances of normalization’s success, AANES, and its military arm, the Syrian Democratic Forces (SDF), are concerned about the consequences of the return of relations, as they are the first victim.

The fears of the US-backed SDF are linked to the fact that terminating its presence is one of the most prominent issues of discussion on the Syrian-Turkish normalization table.

Osama Sheikh Ali, a researcher on Kurdish affairs at the Omran Center for Strategic Studies, told Enab Baladi that SDF is the most prominent goal of the joint normalization between the two governments.

Sheikh Ali explained that Turkey seeks to end the SDF’s existence to protect its borders, while the Syrian regime refuses to recognize the Syrian Democratic Forces (SDF) or to make any concession that legitimizes its existence.

This is what AANES recognizes; On 21 August, the co-chair of AANES’ Executive Council, Hassan Koçer, said that the Turkish-Syrian rapprochement was primarily aimed at ending the AANES project.

The researcher in Kurdish affairs and head of the Raman Center for Research and Consultations, Badr Mulla Rashid, told Enab Baladi via an electronic correspondence that any progress in the normalization process would be at the expense of several major parties in the Syrian equation, primarily “SDF.”

As stated by the researcher, any understanding between the two governments increases the level of military and political pressure on the SDF.

Mulla Rashid noted that the repercussions of Syrian-Turkish normalization on the Syrian Democratic Forces (SDF) depend on the United States’ steps with regard to the Syrian file; The US can use the file of economic sanctions and reconstruction to pressure the regime and Russia and obstruct rapprochement.

SDF does not deny the “existential” threat that haunts it in light of the talk of rapprochement, according to what Hassan Koçer said on 1 September, when he considered AANES to be in a sensitive phase and an existential war.

“Few” cards in the hands of AANES

AANES relies primarily on US support to protect its presence, as well as on understanding between it and Russia in some of the areas it controls.

This is evident in statements made by AANES officials when talking about the Turkish military operation, as the head of the Democratic Union Party (PYD), Saleh Muslim, condemned the position of the United States, Russia, and the International Coalition on 4 July for their lack of support for AANES in the face of an anticipated Turkish military operation, considering their position a “stab in the back.”

AANES does not have many cards to play to protect its presence and restore its political relations, according to researcher Badr Mulla Rashid, considering that it relies primarily on the presence of the United States in its areas of influence.

It also relies on the inability of the Syrian regime to conduct military operations affecting its spheres of influence, the researcher said, adding that AANES is seeking to revive the efforts of the drafting of a new “social contract” through a series of intensive meetings it is holding with various components of the region in an attempt to gain some social acceptance.

Such endeavors would have no real value on the ground, as relations between countries could terminate sub-state organizations through direct military operations or through strict tightening on it, says Mulla Rashid.

For his part, the researcher in Kurdish affairs, Osama Sheikh Ali, said that AANES realizes that its point of strength is the presence of US forces and the International Coalition in northeastern Syria, as their presence is considered the most prominent factor in the continuation of the AANES project.

SDF is not the only one fearing a potential Turkish-Syrian rapprochement; such fears affect the residents of SDF-held areas who are living in a state of instability for fear of a rapprochement that will return them to areas under the regime’s control or a Turkish military operation that will push them to new displacements.

According to what Enab Baladi observed, most residents are convinced that any rapprochement will be at the expense of the existence of the Autonomous Administration of North and East Syria (AANES).

Lawand Othman, 45, a resident of northeastern Syria, told Enab Baladi that the population was experiencing instability with frequent news about normalization between the Syrian regime and Turkey.

Ibtissam, 30, an employee who lives in the town of Ma’badah in the al-Hasakah countryside and who has declined to be fully named for security reasons, said that she would prefer to live in regime-held areas if a Turkish offensive occurred as a result of a rapprochement with the Syrian regime. Meanwhile, the situation is different for young men residing in the region, with the regime having thousands of people wanted for military service.

In a Reuters report, unnamed sources from AANES-controlled areas expressed fears that Kurds in the region would lose their rights following improved relations between the Syrian regime and Turkey.

Earlier, talk of the Turkish military operation and the apparent absence of a US position on it prompted SDF to try to achieve a rapprochement with the Syrian regime and its Russian ally to ensure its existence.

Osama Sheikh Ali, a researcher on Kurdish affairs at the Omran Center for Strategic Studies, predicted three scenarios linked to the Turkish rapprochement with the Syrian regime.

In the event of a rapprochement, US forces could withdraw in conjunction with the application of the Adana Agreement after amending some of its clauses, ending the AANES experience, and the regime returning to the region and regaining control over all of its joints.

In return, this hypothesis requires granting the Kurds some cultural rights, according to the researcher. He ruled out such a scenario in the absence of any indications of a US withdrawal, as well as the difficulty of AANES easily abandoning its military, security, and administrative achievements and structures without guarantees that its minimum demands would be met.

The second scenario relates to an AANES compatibility with the regime by re-establishing the latter’s control over city centers and border points, merging administrative structures with its institutions, as well as creating a formula that would enable SDF to join the regime’s army, according to the researcher.

The latter scenario depends on the actual application of the 2019 agreement, which AANES deems to be partially implemented at the present time.

The agreement provides for the continued functioning of AANES’ civil institutions and for the regime forces being deployed on points of contact with the opposition forces and the Turkish army and on the border strip and northern cities that have become Russia-held.

Sheikh Ali argues that, if normalization is achieved, the latter scenario is more likely under the US presence that impedes any attempt to end the SDF experience militarily.

On 7 July, pro-regime media talk of an agreement between AANES and the regime coincided with statements by Aldar Khalil, a member of the Joint Chairmanship of the Democratic Union Party (PYD), indicating that there were points of contention between the two parties.

“Syria’s sovereignty and the responsibility to protect it is the mission of the government of Damascus,” Khalil said, stressing that the solution to the “Syrian crisis” begins with “putting an end to the occupation of Syrian territory.”

The regime’s refusal to “dismiss its centralized mode of governance for fear of falling” was also considered an impediment to any agreement with it.

After the emergence of many indications about normalization between Turkey and the Syrian regime, Syrian and Turkish statements ruled out rapprochement hypotheses.

Speaking to the Russian Sputnik News Agency on 24 September, the regime’s Foreign Minister, Faisal Mekdad, denied negotiations on normalizing relations between Damascus and Ankara, arguing that Turkey’s failure to comply with its promises under the Astana Process was the only obstacle to the peace process in Syria.

This came one day after statements in the same vein by the Turkish presidential spokesperson, İbrahim Kalın, saying that contacts with the Syrian regime were taking place at the level of intelligence services, stressing that there were no plans for political contact with Damascus currently.

In turn, researcher Osama Sheikh Ali said that the current conditions do not allow a full return of Turkish relations with the regime, arguing that the Syrian regime is not the only actor in the region as it is too weak to achieve Turkish demands for the elimination of the AANES project.

The researcher on Kurdish affairs, Badr Mulla Rashid, agrees with Sheikh Ali’s point of view, stressing that accelerating the steps to restore relations between Syria and Turkey is still challenging.

According to a New Lines Institute for Strategy and Policy report issued on 21 September, the chances of normalization between Turkey and the Syrian regime are significantly low.

The report added that the Syrian regime had no interest in normalizing relations with Ankara as long as Turkish forces continued to be present within Syrian territory.

However, in order for Turkey to ensure the protection of its interests, it needs to obtain guarantees from the regime to prevent the Kurdistan Workers’ Party (PKK) from using Syrian territory to stage attacks against Turkey, as well as guarantees not to harm the population of areas currently controlled by Turkey lest these Syrians flee towards the Turkish border, according to the report.

Even if Damascus is willing to offer those guarantees, Ankara knows all too well that the regime is unable and unwilling to fulfill them, according to the institute.