Russia claims killing 20 IS fighters in Daraa; What is the truth behind? 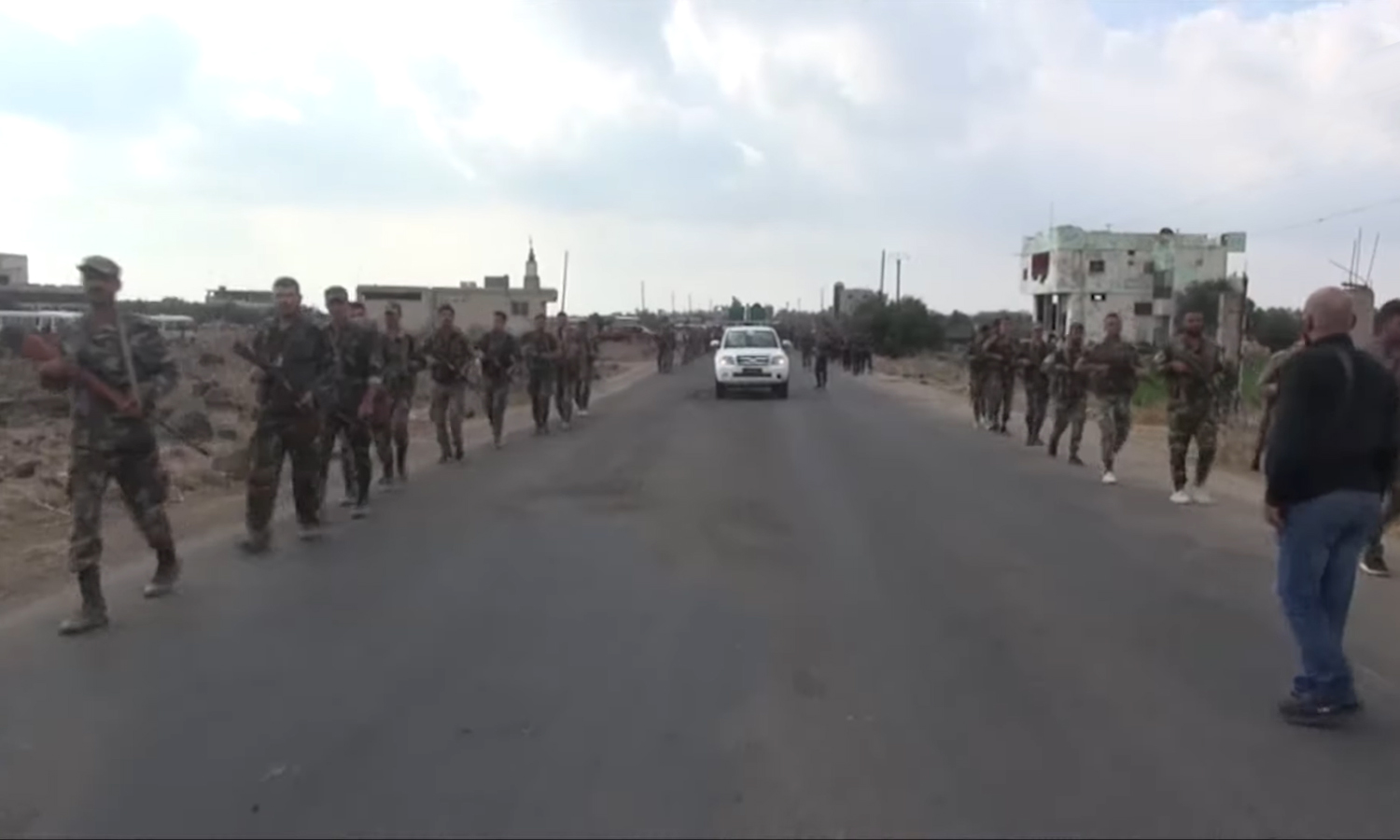 At least 20 Islamic State (IS) fighters have been killed in a joint Russian-Syrian operation in the southern Daraa governorate, including those responsible for blowing up a troop bus, Reuters reported on 17 October.

“The Russian group, on interaction with security units of the Syrian armed forces, conducted a special operation in the city of Jasim, Daraa province in the south of (Syria) to liquidate Islamic State fighters,” TASS said Yegorov told a briefing.

According to Reuters, the fighters had been involved in the bombing of a bus last week that killed at least 18 Syrian servicemen near Damascus.

Yegorov told Tass that those killed in the operation included the organizer of the bus attack as well as others linked to IS’ operations in Daraa and Raqqa province.

On 13 October, 18 soldiers of the regime forces were killed, and 27 others were injured, when an explosive device exploded targeting a military overnight bus in the al-Saboura suburb of Damascus countryside, according to the official Syrian Arab News Agency (SANA).

The bus attack was one of the deadliest in months against Syrian government troops not on an active front line. There was no immediate claim of responsibility and no comment from Syrian authorities, Reuters said.

Intersecting local sources from the city of Jasim told Enab Baladi that the military operation against IS cells left about ten people dead, including two leaders.

Meanwhile, no Russian forces participated in the operation, as the region’s airspace did not witness any raids by warplanes or helicopters.

Enab Baladi’s correspondent in Daraa reported that the security operations against the Islamic State’s sleeper cells were launched by local fighters of Jasim, in addition to groups from the Russian-backed Eighth Brigade, affiliated with the Military Security.

A senior commander in the Eighth Brigade said in a previous interview with Enab Baladi that the decision to send military reinforcements to Jasim was not linked to any order from the Syrian regime and came based on the support requested by Jasim’s notables.

Louay al-Ali, head of the Military Security Branch in Daraa governorate, in early September, called on the notables of the towns of Dael, Tafas, and Daraa al-Balad to form local groups affiliated with the military branch administratively to protect them from a new spread of Air Force Intelligence in Daraa.

Notables of Tafas and Jasim rejected the offer of the Syrian regime, which prompted the latter to push its military vehicles to the vicinity of these areas under the pretext of searching for cells from the Islamic State group there.

The regime got its wish from the town of Tafas under siege and bombardment in early August, as it was able to kill a prominent leader in it, in addition to a group of wanted persons whom it accused of affiliation with the IS group.

With the end of the operations in Tafas, the regime mobilized its armored vehicles in a similar scenario in the vicinity of Jasim city and threatened to bomb the town if its residents did not cooperate with it in its war against the IS cells.

Notables from Jasim repeatedly denied the existence of these cells in the area until 14 October, when military operations were launched in Jasim against IS cells with the support of the Russian-formed Eighth Brigade of the Fifth Corps.

Under pressure from the Syrian regime on the residents and factions of Jasim city, a former leader in opposition factions who hails from Jasim denied that the campaign was carried out with the participation or at the regime’s request but that the locals sought to cleanse it from the IS group’s approximately 100 fighters.

Enab Baladi monitored a conversation between Tafas town’s notables on a WhatsApp chat group which included leaders and dignitaries, who were talking about the “abrupt” emergence of large numbers of IS members in Daraa, confirming that the town did not witness such a presence of IS elements before the regime’s pressure on the area’s population.

The Syrian regime’s media began to exploit the issue of fighting the Islamic State group in Daraa, as is the case with the Russian media, which is what intersecting military sources from Jasim city continued to deny when Enab Baladi asked them questions.

The Ministry of Information in the Syrian regime’s government said, via Twitter, that the regime’s security forces launched a campaign against IS cells in the area with the help of local residents.

This profiteering of the Syrian regime is not new, and it is similar to the scenario witnessed in the town of Tafas in mid-August when the regime army forced local residents to launch a military battle with those accused of belonging to IS in the town. The regime, at the time, claimed that the campaign was a special operation by its forces.

On 15 August, farmers in the vicinity of Tafas town found the body of Mahmoud al-Hallaq (nicknamed Abu Omar Jababi), the commander of IS in southern Syria.

Al-Hallaq’s body was found one week before the killing of Abu Salem al-Iraqi, one of IS’ senior commanders in southern Syria, after he had fallen into an ambush by local fighters.

The Islamic State has previously claimed responsibility for several operations against members of the regime forces and other former fighters of the opposition factions at different times.

The group is also accused of being behind targeting operations that targeted Daraa notables without announcing that it was behind them.

Meanwhile, notables from Daraa accuse the Syrian regime of using IS cells as a “pretext” to launch security and military campaigns against areas opposed to it in southern Syria.

What happened in Jasim?

Jasim, the key small city in Daraa’s northern countryside, has recently witnessed clashes between former fighters of the opposition factions and IS sleeper cells. The participation of the regime forces was limited to two artillery shells that targeted the northern outskirts of the area during the confrontations.

Enab Baladi’s correspondent in Daraa reported that a number of the Jasim’s fighters were killed and wounded during the clashes, while two IS commanders were killed, known as Abu Mujahid Barqa and Ayham al-Faisal.

The correspondent added that dozens of local fighters from other villages and towns came to Jasim to participate in the military operations against the IS organization.

The local fighters also detonated the houses which IS’ fighters were taking as shelter, according to the correspondent.

As clashes entered the fourth day, local reports asserted that IS cells had retreated from Jasim without confirming its final elimination until the moment of editing this report.