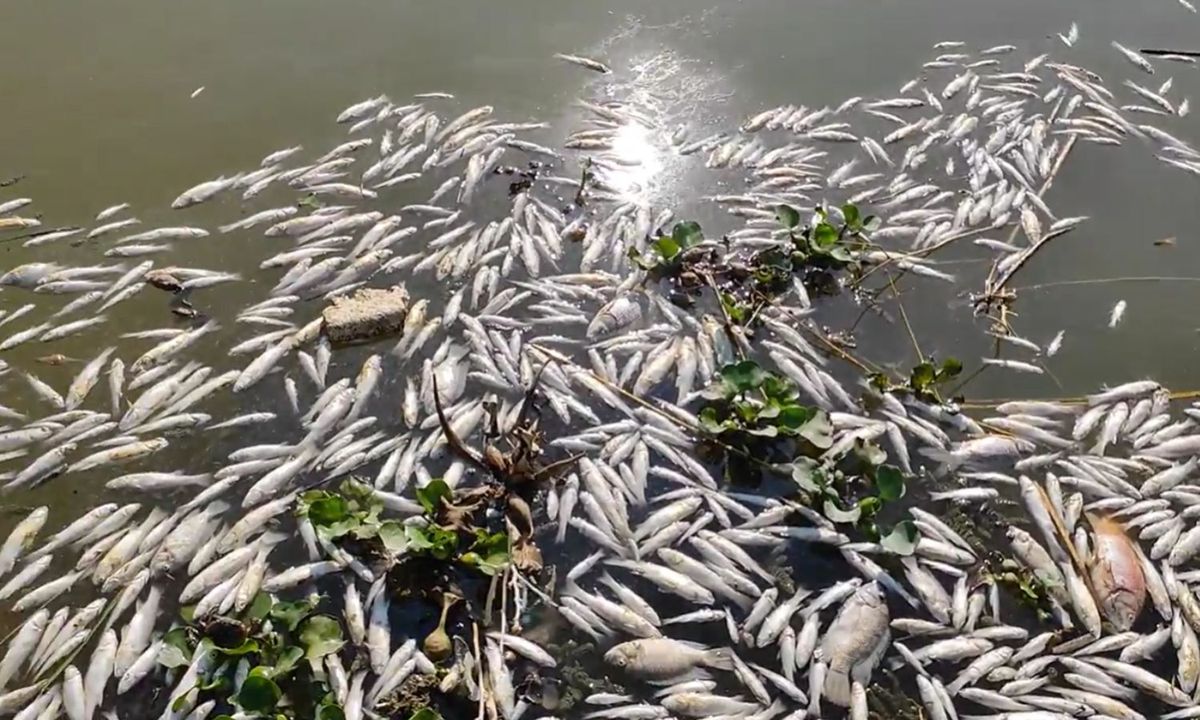 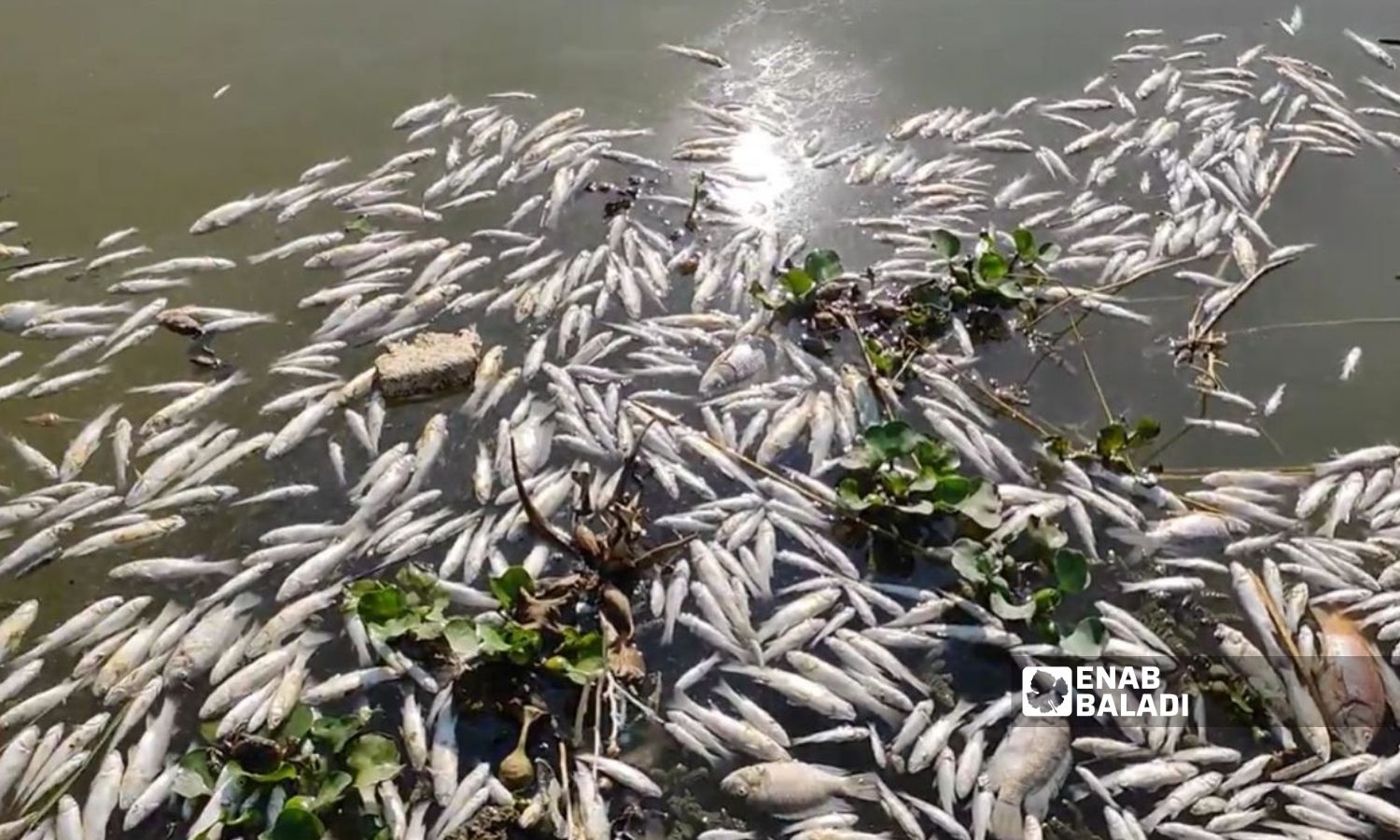 Residents’ complaints about the Tal Salhab sugar factory in the countryside of Hama city continue due to the negative effects that the factory has on the agricultural and animal sectors in relation to fishery resources.

Over the past few days, complaints and disputes escalated due to the chaos and pollution caused by the re-running of the Tal Salhab sugar factory after a nearly seven-year shutdown. Large quantities of fish died because of the plant’s residues pouring into the Orontes (Asi) River.

Abdel Moeen al-Masry, 45, farmer and fisherman from the village of Qabr Fidda in the al-Ghab Plain, pointed out to Enab Baladi that the plant water pouring into the Orontes River was causing disasters for fisheries. It affects the river for at least a month and a half, prompting farmers to stop irrigation for fear of rotting plant roots.

Al-Masry drew attention to the existence of two branches of the river, one passing through the area of ​​al-Sharia, al-Tuweini, and al-Haweiz, and it is the branch into which the polluted water left by the factory drains from the villages of al-Hakoura and Khirbet al-Naqoos.

Regarding farmers’ struggles with the plant, al-Masry pointed out that the issue is not new, noting that delegations were formed to review the Ministry of Agriculture in the regime’s government before the revolution to talk about the damage caused by the sugar factory and its effects on farmers and fish that are dying with their fries and eggs, causing a rotten smell stretching several kilometers after the fish die, but without a tangible result.

The land of some villages adjacent to the factory is using water from the Apamea Dam, which is suitable for watering crops compared to factory waste. Meanwhile, other villages are forced to use contaminated water due to two releases per year; the first would kill fish stocks, while the second would annihilate all living creatures in the river.

Through its correspondent who visited the Orontes River, Enab Baladi had spotted large quantities of dead fish due to the flow of industrial waste into the river’s water.

The pictures showed fish of varying sizes dead and floating on the surface of the water over long distances within the river’s waters due to pollution caused by the sugar factory wastes.

For its part, the Syrian Salvation Government (SSG) warned against eating fish that had died from pollution and the need to report on anyone who sold them to take action, according to the circular issued by the Government’s Ministry of Health. At the same time, it also indicated poisoning cases among the residents in the “liberated” areas due to eating fish.

On 26 July, the pro-regime al-Watan newspaper reported the complaints of some residents of the region due to the influx of sugar beet production wastes into the Orontes River, the agricultural drains, and the irrigation channels in the area, as well as environmental pollution due to unpleasant odors emitted over large areas.

The people also pointed to the threat to the natural fish wealth that lives in the water bodies and to the severe pollution of the lands planted with summer vegetables.

According to the newspaper, the people appealed to “concerned authorities” to intervene to address the industrial agro-environmental problem, pointing to the silence of these authorities on pollution harmful to the environment and human beings.

These criticisms were met with counter-criticism by a regime official. The Director of Plant Production at the General Authority for the Development of al-Ghab Plain, Wafik Zarouf, said in response to criticism of the plant due to the emission of unpleasant odors that the company had been making 650,000 tons of beetroot for a period of three months, and the smells filled the al-Ghab Plain for the same reasons during that period.

The Director of Plant Production also stressed that the manufacturing process is continuing and that the quantities delivered amounted to about 30,000 tons of sugar beet, noting that the operating period is no longer as long.

Agronomist Anas Abu Tarboush told Enab Baladi that the sugar factory’s water contained high proportions of contaminants, especially at the start of the operation and during the washing of exchangers, evaporators, or boilers.

Abu Tarboush referred to the processing operations that beetroot requires, such as washing and fermentation, and other matters that require more professional handling of the issue after receiving the crop from the farmers.

Chemicals are also used, including sulfur, which is considered a toxic element if the quantity exceeds a certain limit, which insulates the area, and prevents the formation of oxygen in it, which eliminates the life of aquatic organisms.

The Director of the General Authority for the Management and Development of the al-Ghab, Mustafa Alawi, told al-Watan on 26 July that a number of fish in the sites of Tal al-Ghar and Tal al-Tittin were found dead during a recent visit to the Orontes River.

The sugar factory in Tal Salhab returned to work last July after an early announcement of the return last April by the Director of the General Organization for Sugar, Saad Eddin al-Ali, following a hiatus that has continued since 2015.

Al-Ali justified this hiatus by the lack of economic viability due to the decline in beetroot cultivation and the lack of production, which led to the suspension of farming by the Economic Committee for the past two seasons.

The factory’s manufacturing capacity is scheduled to reach 3800 tons of sugar beet per day, producing about 16 thousand tons of white sugar during the manufacturing cycle that started in July and will end within 40 days.