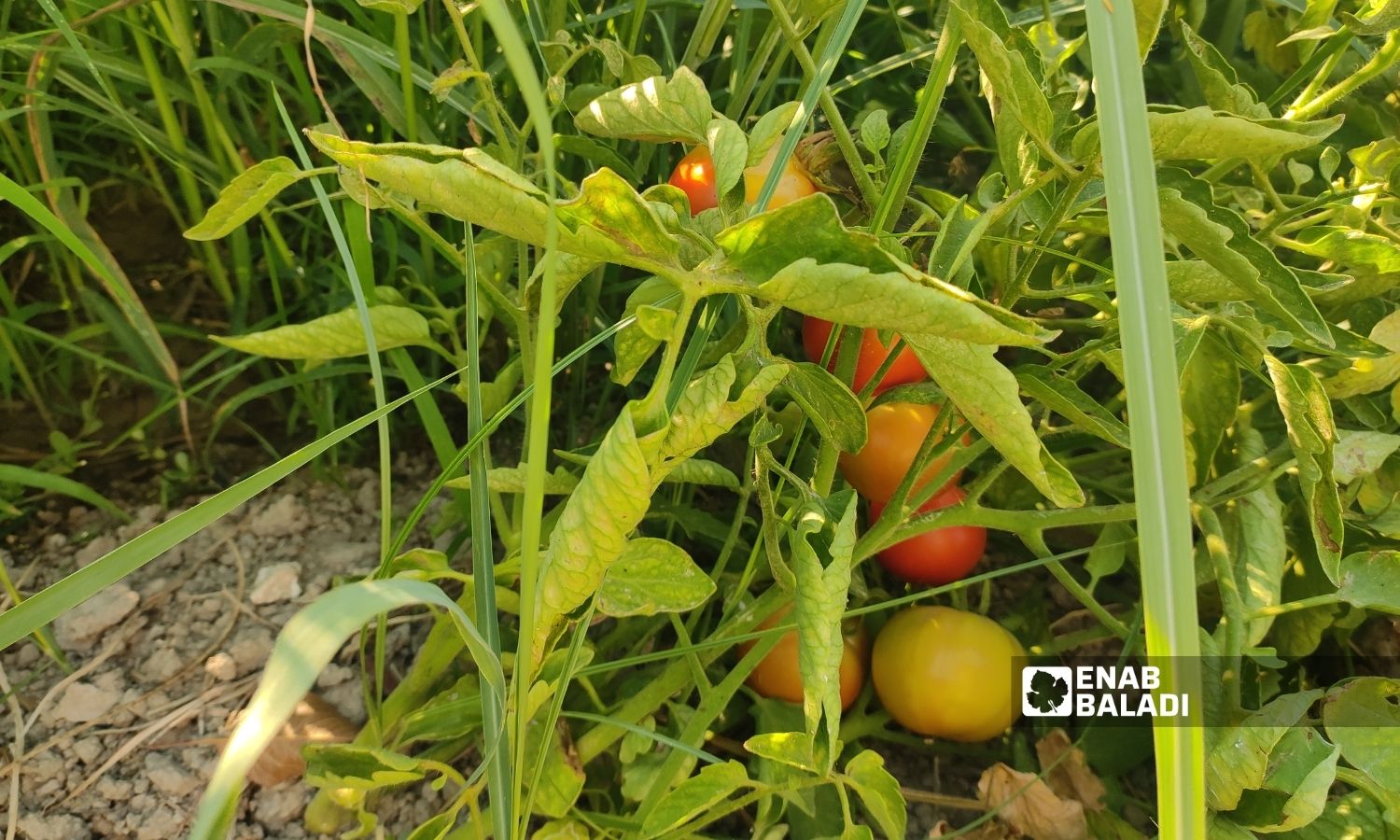 After losses suffered by their season of fruitful trees as a result of weather conditions, the delay of winter, and the late waves of frost, the farmers of the Darkush and Azmarin plains in the western countryside of Idlib began reaping their summer vegetable crops in the hope of securing the costs of irrigation and fertilizers.

Loss in the basic spring crops included greengage, peaches, and apricots of all kinds.

Darkush town and the lands adjacent to the Turkish border are not designated for most summer crops due to the density of fruit trees there, as the soil does not receive much sun, while the cultivation of summer vegetables requires large amounts of sunlight.

Al-Mughirah Dabel, 29, who planted his land with eggplants and tomatoes, hopes that his family and he will live on it, especially since farming is the only profession he practices.

But as cultivation began at the beginning of the summer season, the prices of tomatoes and eggplants in the local markets let him down.

Dabel told Enab Baladi that the price of a kilo of eggplant is one and a half Turkish liras (1 USD equals 17.5 TL), and tomatoes are 2 TL; such a price does not compensate for the costs.

“Our profession has become a complete loss,” he added.

On average, one dunam (about 900 m2) produces annually about three tons of eggplant for good agricultural lands, 800 kilograms of peppers, and two tons of tomatoes.

Even if irrigation turns to relying on solar energy, it is costly in relation to the return and the standard of living, as the costs of one system range between 1000 and 3000 US dollars, according to what Enab Baladi monitored.

The variation in these prices depends on the distance of the agricultural land from the Orontes River or the depth of wells.

The prices of fertilizers and basic medicines also increased, bringing the price of one bag of fertilizer to 50 US dollars, excluding the costs of packages or bags and transportation costs as well.

Farmer Ghassan Qara Bello, 30, faces several complex and thorny issues during his work, which he has been practicing since childhood, due to the high cost of caring for his land.

“We no longer know what to do to avoid loss, should we sell our land? This is our profession, and this is our land, and here we were brought up,” he said.

Bello added, “We are farmers from our childhood, and we do not know any other profession or craft. We wait for the summer every year, hoping that it will bring with it a bountiful harvest, and every year the same suffering is repeated.”

Usually, the farmers put the crops, after harvesting them, in bags designated for agricultural products or packages of cork or cardboard and plastic, which are expensive packages whose price ranges between 1 and 5 TL per every empty container.

Then they transport their products to the central vegetable market, known as “al-Hal,” where the vegetables and fruits are sold to the owner of the shop and then to the merchant. During this process, a percentage of the price of the goods is deducted, called “commission,” and this percentage reaches 10 percent.

The rise and fall of prices is also linked to available markets. When goods are sold to the rest of the governorates or outside the country, prices are good, and when they are sold in local markets in the northern Syrian regions, prices become low as supply increases, and prices drop, Bello told Enab Baladi.

The agricultural sector in the northern regions is witnessing an absence of support or subsidization of local governing bodies, amid the loss of farming and watering equipment, with a lack of financial capabilities.

The Food and Agriculture Organization of the United Nations (FAO) said 9.3 million people suffer from acute food insecurity in Syria, and another 1.9 million are at risk of falling into food insecurity.

About 4.3 million people in northwestern Syria lack food security. Two-thirds of the population are displaced and depend on food aid for their livelihood.

Meanwhile, agriculture provides only 58 percent of the population’s needs for bread, according to an assessment of the food sector of the Office for the Coordination of Humanitarian Affairs.