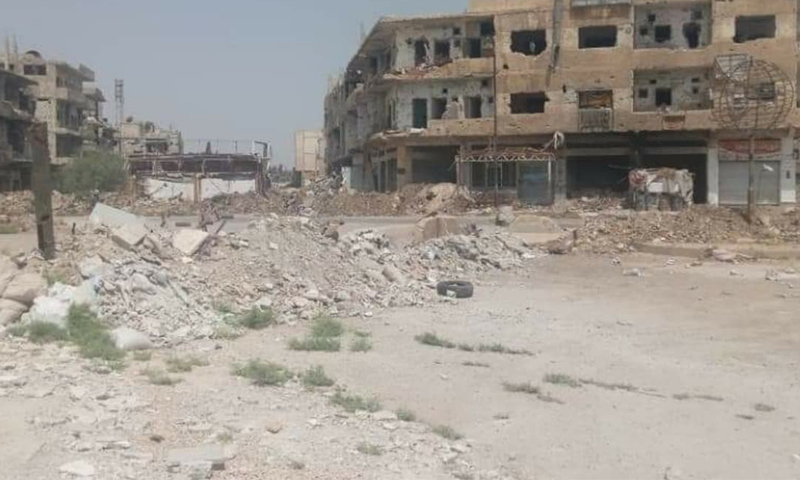 Abu Mohammed, 33, stands in a long queue in front of the al-Haram Remittance company in Daraa camp in southern Daraa governorate to receive his financial allocations from the UN Relief and Works Agency for Palestine Refugees (UNRWA).

Abu Mohammed, who asked to be referred to by his title for security reasons, complains about the lack of clarity in the value of the financial aid and its monthly continuity, as is the case with the Palestinians residing in neighboring countries, Lebanon and Jordan.

He told Enab Baladi, I received the last cash amount on 15 March, and its value was equal to 90,000 SYP (about 25 US dollars) for each family member, without disclosing the real UN number due to him by the organization’s employees.

Al-Haram Remittances Company refuses to deliver the amount in US dollars, according to Abu Mohammed.

Likewise, the Palestinian refugee Sanaa, who declined to give her full name for security reasons, said that in the last payment, she received 82,000 SYP (about 21 US dollars) for each family member.

Sanaa, 35, told Enab Baladi that the high cost of living was not balanced by the amounts handed over and that it was no longer sufficient for her family’s financial needs.

Fayez Abu Eid, the head of the media department in the Action Group for the Palestinians of Syria (AGPS), told Enab Baladi that the UNRWA handed over 75,000 SYP (18 US dollars) to each person while it handed over 90,000 SYP (about 25 US dollars) to people with disabilities.

He added that there were many demands made to UNRWA by the AGPS and the General Authority for Arab Refugees in order to provide the Palestinians of Syria with financial aid on a monthly basis, similar to the Palestinians of Jordan and Lebanon but the UNRWA did not respond to these demands.

Abu Eid explained that the AGPS demanded that UNRWA should give aid to the Palestinians of Syria in northern Syria, but the answer was that “they can go to the Syrian regime’s areas if they want.”

Abu Mohammed said that the Syrian regime “emptied the subsidy from its content” and that most of the Palestinians of Syria live below the poverty line because they do not have real estate.

He added that the residents of Daraa camp repeatedly complained to UNRWA, but it did not respond for reasons related to the dominance of the security intelligence and for the employees’ attachment to their positions, which the Syrian regime might strip them off if they violated its instructions regarding determining the amounts and the time period.

The UNRWA branch in Syria did not respond to the questions asked by Enab Baladi to find out the reasons for not revealing the exact amount for each person and for granting aid monthly.

UNRWA estimated that there are 135,000 Palestinian refugees in Syria who belong to the “most vulnerable” categories.

The number of Palestinian refugees in Syria is estimated at 438,000, including those displaced from their camps and facing difficult economic conditions, the most important of which is the depreciation of the Syrian pound and the soar in prices.