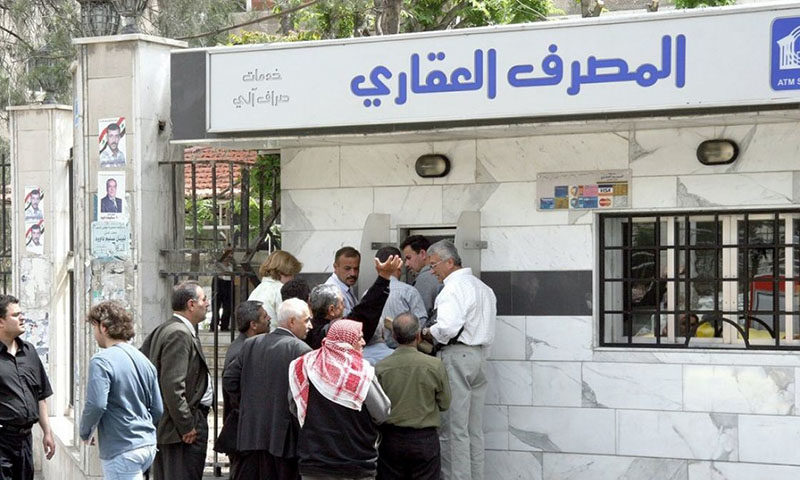 The State employees’ and retirees’ agony is endless when it comes to receiving their monthly salaries through ATMs affiliated with banks in the Syrian capital, Damascus.

According to what Enab Baladi has monitored, the Real Estate Bank and Commercial Bank ATMs are the most ancient and most inoperative, in addition to the slow pace of functional ATMs in executing cash transactions.

A government employee at the Ministry of Justice told Enab Baladi that a sudden ATM malfunction cost him his entire salary last March. He says that this “catastrophe” of his went unnoticed by bank workers.

The employee, whose name Enab Baladi did not disclose for safety reasons, explained that after requesting to withdraw the salary through the Commercial Bank branch’s ATM in the al-Muhafaza Square of Damascus, and during the bill-counting phase, electric power went out a moment after his bank card was ejected.

The employee remained standing in front of the ATM for minutes so that he could figure out what to do, and then rushed to the bank’s main branch to explain what had happened to him, but without receiving any assistance from bank employees; power went out at the exact moment money bills were being counted, while bank statements indicate that he had received his salary.

As a government acknowledgement, a banking manager spoke on 11 April about the decline in ATM service in government (regime) territories, with reasons boiling down to numerous problems for which the government has not yet been successful in finding decisive solutions.

Among the problems was the electricity rationing, which caused many ATMs to go out of service, prompting some banks to redistribute their ATMs and regroup them in specific areas. For instance, the Real Estate Bank installed 33 ATMs in the bank hall at the administration headquarters in the al-Muhafaza Square.

“ATM is out of service”

Hussein, a young man who asked not to be named in full for security reasons, withdraws his retired mother’s salary on a monthly basis from the Commercial Bank ATM in Marjeh Square, Damascus.

Hussein told Enab Baladi that when he was withdrawing the salary last March, and during the completion of the withdrawal request process, the phrase “ATM is out of service” appeared on the screen. Following the appearance of the said phrase, the ATM declined all requests to cancel the withdrawal and return the card. Hussein waited for several minutes in vain and then had to ask an employee of the bank about what needed to be done to recover the card.

After several attempts to save the card from being swallowed by the ATM that suddenly went out of service, the employee advised him to accompany his mother to the bank’s main branch to obtain a new card. “That is better than waiting.”

The issue of the shortage of human cadres working in feeding, maintaining, and operating ATMs is among the problems mentioned by the banking manager.

The banking manager (unnamed) also spoke to the local pro-government newspaper al-Watan about the low number of ATMs compared to the required services. For the time being, only 500 ATMs are operative in both the Commercial Bank of Syria and the Real Estate Bank, while some 5,000 ATMs are needed.

The manager suggested that the solution would be to link all the public and private banks’ ATMs to one another through a “national network switch,” allowing cardholders to use whichever ATM is closest to them. He also suggested that a sufficient number of new ATMs be secured and that they be supplied with electricity, especially in vital and overcrowded areas, in addition to training more bankers on dealing with ATMs and how to operate and replenish cash in them.

The newspaper quoted “monitors of the banking activity” as saying that the regime’s government is not showing genuine willingness to solve the problem of ATMs, and all the actions that have been taken in the matter were mere “patchwork and procrastination” pending the realization of the “dream” of electronic payment.