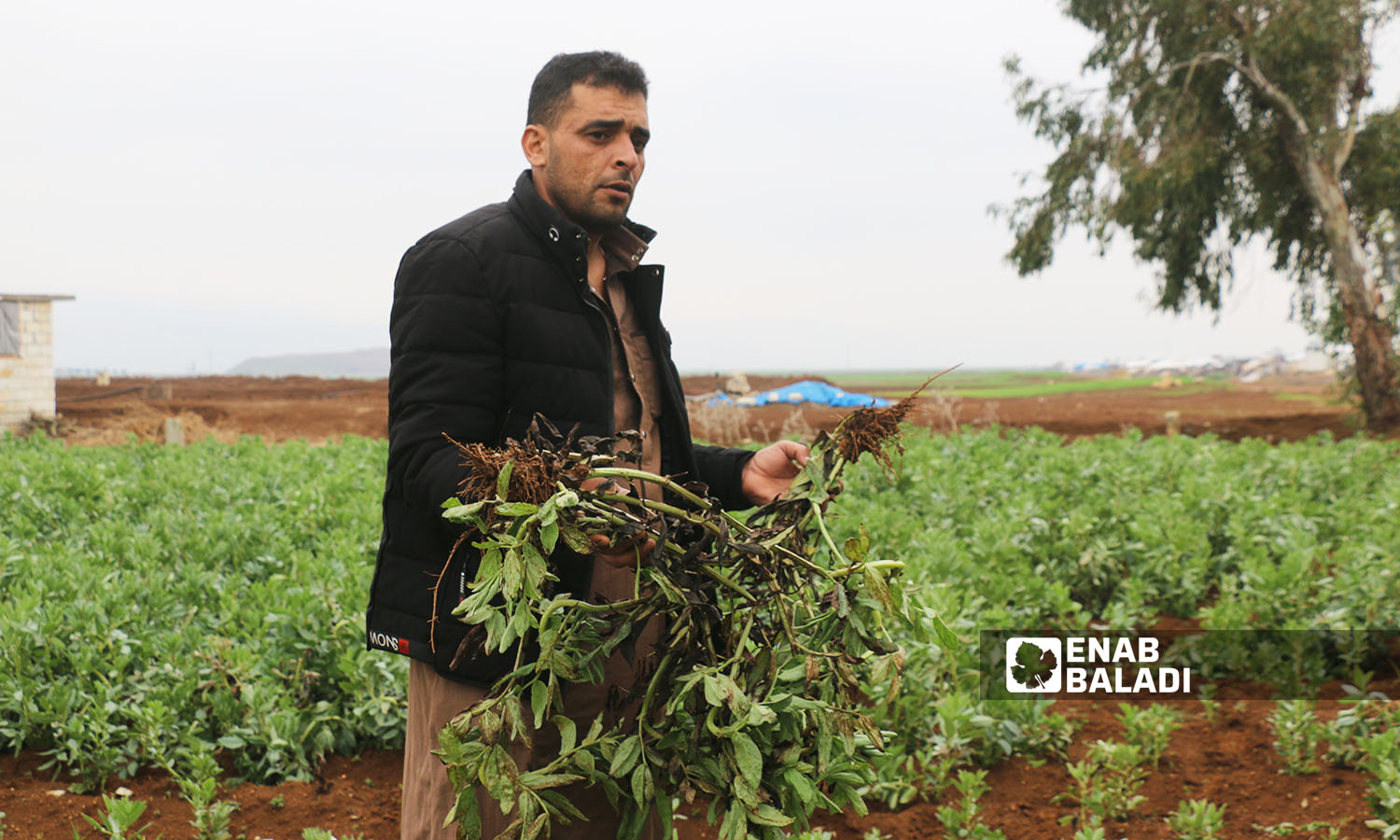 Fadi al-Ahmad, 45, uproots dried seedlings of broad beans that were struck by the frost wave or were damaged by the field mouse as he strolls around his land in the northwestern Idlib region.

Before the frost waves, the quality of his crop was high in the flowering period, but now, the leaves are scorched, the stems are broken, the flowers fall off, and the broad bean pods have dried up.

Frost is one of the most dangerous climatic factors affecting agricultural crops. It occurs as a result of the transformation of water vapor from a gaseous state to a solid state directly without passing through the liquid.

The danger of frost increases if its waves occur during the autumn season, especially in the early stages of plant growth when it is in a stage where it is unable to confront the severity of the cold, according to al-Ahmad.

The danger of frost lies in the late spring, at the time of harvest. In this case, it harms the fruits, and the damage may be due to the freezing of the soil.

Therefore, farmers are trying to develop plant strains and species that mature in a short period of time so as not to be affected by frost, which helps to expand cultivation.

Frost affects agriculture in high areas, while low areas are exposed to less frost, but extreme cold weather fluctuations make crops vulnerable to frost, while the upper slopes are rarely affected by frost.

The farmer has rented land in the Rouj plain, which is the only agricultural area outside the control of the Syrian regime in the area, since 2020, where he grows vegetables and wheat, in addition to a large presence of livestock.

The cost of one dunum is 150 US dollars, and this cost was divided between planting, cultivating, and watering before the rains in September.

The area of ​​his land planted with beans is three dunums, and the damage rate to his crop has reached 80 percent, in addition to the cultivation of 50 dunums of wheat, which was damaged for the same reasons.

The field mouse eats the roots of the plant, whether it be beans, wheat, or barley, in addition to the stem and leaves outside the soil, and these ingredients are considered its daily meal that worries farmers.

Al-Ahmad, along with many farmers, is currently trying to use poison in the form of potatoes or gas pills, which he puts inside the burrow and then blocks it.

However, the costs of killing the “little enemy” are very high, according to al-Ahmad’s description, as there is no governmental or private agency that he can use to compensate him for these damages.

The reasons for the spread of the field mouse are the lack of control, and the lack of deep plowing of the land for periods extending for years, as happened in the region, but after its spread, the land must be inspected and cared for periodically, the agricultural engineer Mousa al-Bakr told Enab Baladi.

In order to eliminate the field mouse, poisonous baits must be used or through gas pills, and it is possible to mitigate the frost wave by burning tires until a smoke layer is formed that prevents frost from reaching the ground, al-Bakr added.

While the farmer, Mustafa al-Latif, 44, uprooted the destroyed broad beans due to the frost, and his crop of “nigella sativa” was completely damaged due to being inundated with rainwater, in addition to frost, which prompted him to plow the land after the crop was damaged.

Al-Latif’s wheat crop was also damaged due to frost waves.

The cost of agriculture per dunum amounted to 150 US dollars, as he rented the land, and the damage rate exceeded 50 percent of the cultivated area.

The crops were affected as a result of the ice in the Rouj plain, west of Idlib, and among the most important crops are broad beans, wheat, and barley. The effect of frost on beans is great, as it is in the stage of formation of flowers and pods, as the damage is estimated between 80 and 90 percent, according to al-Bakr.

The agriculture engineer added that the damage can be avoided by fertilizers and some chemical additives.

The local commercial markets are not affected by the impact of the broad bean crop since it is not considered a strategic crop, unlike strategic wheat and barley.

The damage to wheat and barley due to frost is estimated at 30 percent of the cultivated area, the same damage caused by the field mouse.

If the field mouse is not eliminated, the damage to crops can reach 80 percent, according to the agricultural engineer.

The damage rate of broad beans due to frost is very large in most agricultural lands.

Some lands have had 100 percent damage, forcing farmers to plow the land and plant it with another crop, and in some agricultural lands, the damage rate was less and ranged between 40 and 60 percent overall, al-Bakr said.

The deteriorating economic situation of the agricultural sector in Idlib, the impact of the loss of more than half of the fertile lands in areas outside the control of the Syrian regime, the loss of farming and watering equipment as well as the lack of material capabilities had all damaged agriculture in the region.

Ahmad al-Kwan, the assistant minister of agriculture and irrigation in the Syrian Salvation Government (SSG), told Enab Baladi that during the tours of the fields planted with winter crops, no large spread of the field mouse was observed, and the effective colonies and burrows were within the normal limits.

He added that there is no need for control in the current period, especially after exposure to air troughs, good rates of rain, and low temperatures, which were enough to limit the reproduction and spread of the field mouse.

The deputy minister insisted that there was no significant damage to winter crops due to the effect of frost. “In the past weeks, a normal winter atmosphere has passed, and there is no winter without frost,” he added.

Frost damage lies when spring frosts occur with the beginning of summer vegetable cultivation, and all winter crops can adapt to frost, especially wheat and barley, and with increasing hours of cold, the productivity of these crops increases.

According to the local official, the broad bean crop is a winter crop, but some farmers want to plant some crops ahead of time in the hope of early production.

Most seedlings are affected by early winter frosts, but often the effect hits the flowering and germinating stage, in which the plant is able to recover and complete its life cycle to give flowers and fruits again, al-Kwan said.

The commercial market mainly depends on (winter) crops, not on crops that precede the period of rain, according to the deputy minister.

He also stressed that the wheat crop “was not affected by frost, and what we see of yellowing in some fields is due to the state of waterlogging in the soil and nitrogen washing, which is a temporary condition, and when warm weather conditions are available, and the first batch of nitrogen fertilizer is given, the greenery returns to the plant and returns to its natural situation.