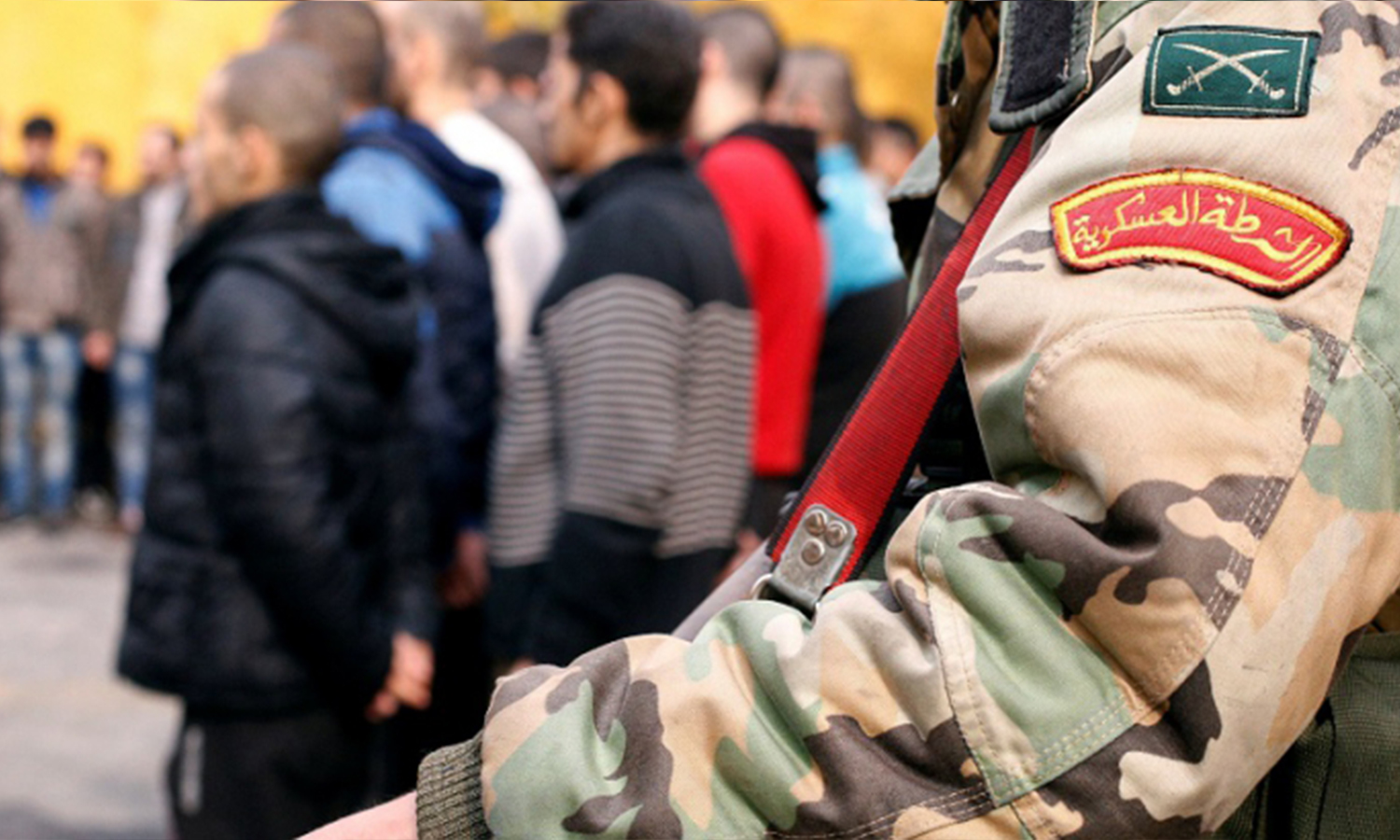 The delay period for evaders of compulsory military service in Syria’s southern region expired in early April, which placed the wanted young men between two options, either joining the Syrian regime army or being on the wanted list where they will be exposed to security prosecution.

Thousands of Syrians who are wanted for military service, regardless of their political position, face the problem of checkpoints and security patrols tasked with searching for them.

Their fears go beyond security prosecution as they worry about their assets or the assets of their relatives should the person wanted for forced conscription fail to pay the exemption fee after passing the age limit of 42 years old, in accordance with the laws and decisions of the Syrian regime’s government.

In 2021, the southern governorate of Daraa saw thousands of its youth migrate after obtaining a passport, like most cities throughout Syrian geography. Migration to Belarus was opted for with the aim of arriving in Europe through smuggling routes, as well as to the UAE, Egypt, Libya, and Iraqi Kurdistan.

The Syrian regime allowed evaders of compulsory military service to defer for a full year in April 2021 but went on to issue a travel ban on 23 May of the same year. However, on 17 June, it circulated to the Recruitment Divisions in Daraa and Quneitra governorates to grant travel permissions to those who were deferred from military service for a whole year, which prompted young people to migrate seizing the opportunity they had during this year.

The Immigration and Passports Department’s branch experienced a year-round overcrowding crisis and long queues, which contributed to supplying the state treasury with financial resources in the form of fees and revitalizing air travel.

According to lawyer Suleiman al-Qarfan, head of the Free Syrian Lawyers Syndicate, the Iranian policy in the southern region is aimed at emptying it of youth and turning it into an area governed by drug traffickers.

The regime, therefore, facilitated travel procedures to neutralize young people from any future confrontation, with a view to taking total control of the region.

Al-Qarfan also told Enab Baladi that Syrian youth are taking risks in order to seek a decent life, secure income for themselves and their families, and also to flee compulsory military service.

All options are possible except staying

Hassan, 28, who refused to disclose his full name for security reasons, does not want to be enlisted in military service or within any other paramilitary entity in Syria because “serving in any armed group will certainly not be in the interest of this country, but rather in the interest of the military authority that I shall serve .”He has therefore resorted to traveling, taking advantage of the delay period.

The young man told Enab Baladi that “most of the migrants seek either to pay an exemption fee, or to leave the regime-controlled areas, even though most are living in difficult economic conditions in Egypt, the UAE, Erbil, and Libya.”

“All options are possible except for the option to stay in Syria. The postponement period was an opportunity for those who did not enlist in military service to escape because they were not convinced to serve the regime”, says the young man who currently has future concerns related to military service, seeing that he was unable to pay the exemption fee or leave Syria.

“Living abroad is rather expensive,” says the young man working at a home furniture shop. The majority of young people are unable to save for airline tickets and accommodation expenses in the destination they wish to reach or the expenses of the smuggling route. Rather, they only work to secure their monthly living expenses and house rent.

One of the factors that contributed to encouraging young people in Daraa to migrate is the state of chaos in southern Syria, including assassinations, thefts, and robberies.

According to Hassan, “Young people are overwhelmed by constant fear following assassinations that have not been limited to a specific group, as they targeted those who were previously in the opposition factions as well as those who served in the ranks of the regime forces.”

Most of the young people who joined the regime’s military groups “only intended to protect themselves from the dangers that being arrested could bring, and obtain security permits that would allow them to pass through the regime’s checkpoints,” he added.

In 2021, Daraa region recorded at least 508 assassination attempts, in which 329 people were killed, according to Daraa Martyrs Documentation Office.

Migration methods in Daraa were not limited to obtaining a passport. Hundreds of migrants also migrated via the smuggling routes through Lebanon or northern Syria to Turkey and then to Europe, which is a route fraught with dangers.

The term conscription refers to compulsory military service. This issue is dealt with legally by relying on whether recruitment is imposed by government forces or by a non-governmental party.

In turn, the Syria Justice and Accountability Center (SJAC) says, “despite the state’s advantage of sovereignty, there are some cases in which the state violates individuals’ rights by imposing military service and sending them into combat without giving an opportunity to challenge the mandatory recruitment decision.”

International law stipulates that states should refrain from repeating the punishment for conscientious objection to military service, a term meaning the right to refuse to perform military service on the basis of freedom of thought, conscience, or religion.

The right to conscientious objection to military service is based on Article 18 of the International Covenant on Civil and Political Rights and Article 18 of the Universal Declaration of Human Rights, which include the right to freedom of thought, conscience, religion, or belief. However, these articles do not contain any specific reference to conscientious objection to military service.

However, the Human Rights Committee concluded that the right to conscientious objection is guaranteed by virtue of its inclusion in Article 18. The Committee also announced its position in its General Comment No. 22 (in 1993) on the right to freedom of thought, conscience, and religion and in its jurisprudence on individual communications submitted to the Committee.

States may exempt individuals from military service for a wide range of reasons, such as health, education, and family status. However, this is no substitute for legal recognition of the issue of conscientious objection to military service.

Anyone who has exceeded the age specified for military service assignment while being exempt for health reasons or for being an only child, only later to be found that this exemption was not valid, is considered an evader and is called to “pay the exemption fee .”In the event of refusal to pay, a referral file is drawn up to the judiciary, and the amount due would be obtained from the evaders in accordance with the Public Funds Collection Law.

Conscientious objectors, including conscription dodgers and military service evaders, may leave their countries as a direct result or in anticipation of being called up (or re-called in reserve) for military service, either in person, by declaration, or by public notice addressed to a particular group.

Sometimes, those already abroad refuse to return to their countries. Those already in the state’s armed forces may escape from the country after fleeing military service or being absent without permission, whether they were conscripts or volunteers. Under the United Nations classification of such cases, the fact that they are deserters or evaders of recruitment does not preclude the possibility of them being granted refugee status.

The United Nations General Assembly’s recognition of the need for international protection for those who refuse military service dates back to 1978, at times of apartheid.

A much more general case of persons fleeing their countries because of their conscientious objection to service in the armed forces was addressed later.

In its resolution 77 of 1998, the Human Rights Committee noted that article 14 of the Universal Declaration of Human Rights, recognizing the right of everyone to seek and enjoy asylum from persecution in other countries, encouraged states to consider granting asylum to conscientious objectors who had to leave their country of origin because of fear of persecution for refusing to perform military service when there was no appropriate provision dealing with a conscientious objection to military service.